VOPUS Gnosis > Articles > Where are the tombs of the twelve apostles of Jesus? 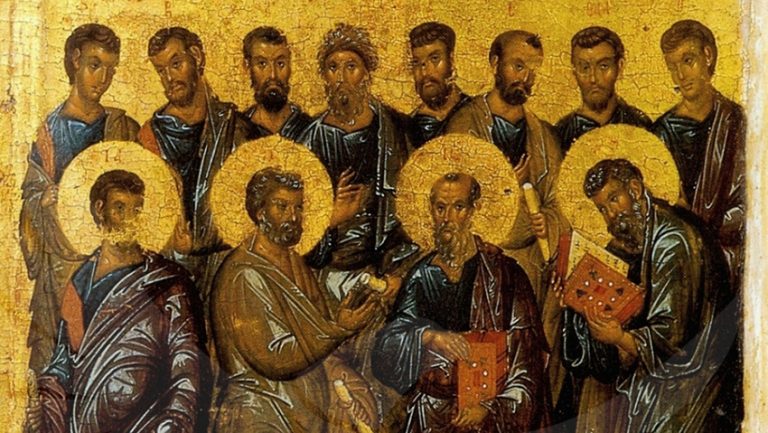 On this occasion I would like to send you an article that I consider magnificent, highly historical for its content and essentially Gnostic for referring to the death encountered by the twelve apostles, followers of the V.M. Aberamentho.

This article adds the location where their tombs containing their bones and relics were finally found.

What is interesting, dear friends, is that as we are reading the way these TRUE MEN were martyred by the unconscious multitudes, we are realizing the amazing FAITH and CONVICTION these beings had in their souls and their supreme loyalty to whoever was their Master, Guru and Preceptor.

Without further ado, dear reader, I invite you to read these interesting stories that deserve to be taken to reflection and meditation:

WHERE ARE THE TOMBS OF THE TWELVE APOSTLES OF JESUS?

“An article in the National Catholic Register reported on the places where, with greater certainty and based on research by archaeologists, the tombs of the 12 apostles would be found.

The twelve apostles are: Simon, called Peter, and his brother Andrew; James the Greater ─son of Zebedee─ and his brother John; Philip and Bartholomew; Thomas and Matthew the publican; James the Less ─son of Alphaeus ─; Simon the Canaanite, Judas Thaddeus and Judas Iscariot, who delivered Jesus. In replacement of the latter, Matthias was appointed later.

The article by the writer Thomas Craughwell, indicates that during the last 100 years, archaeologists have all but confirmed the location of the tombs of St. Peter, St. Paul and St. John.

About the year 64, St. Peter was crucified head downward in the Circus, or Arena, of Nero on the Vatican Hill. Christians recovered his body and buried it in a nearby cemetery. About the year 326 the Emperor Constantine leveled what remained of the arena, and the hill, and erected a large basilica with the high altar positioned above St. Peter’s grave. But after centuries of restorations and reconstructions, the location of the grave became lost. Tradition continued to insist that Peter’s bones lay beneath the high altar of his basilica, but no one had seen it in centuries.

In 1939, workmen were digging a grave for Pope Pius XI in the grottoes under St. Peter’s when one of them felt his shovel cut into a void rather than dirt. Shining a flashlight through the hole, the work crew saw the interior of a second-century mausoleum. Further exploration revealed an entire Roman necropolis, covered over by Constantine and perfectly preserved. Directly beneath the high altar of St. Peter’s, archaeologists found a simple tomb containing the bones of a robust, elderly man. Scratched into the tomb wall were countless prayers and petitions to St. Peter, as well as a Greek inscription that read, “Peter is within.” After years of study, Blessed Pope Paul VI declared in 1968 that the bones in that tomb were those of St. Peter’s.

Ancient tradition tells us that St. John the Evangelist died in Ephesus in what is now Turkey about the year 100. In the 4th century, after Constantine put an end to persecution of the Church, Ephesian Christians built a chapel over the apostle’s tomb. In the fifth century Emperor Justinian replaced the chapel with a grand basilica. After the area was conquered by the Turks, the basilica was converted to a mosque, which in turn was destroyed by Tamerlane in 1402. In the 1920s, archaeological teams from Greece and Austria excavated the remains of the basilica and found St. John’s grave inside. The tomb was empty, and no one knows what became of John’s body.

St. Andrew, the first man Christ called to be one of His apostles, was the brother of St. Peter. It is said that after Christ’s ascension into Heaven, Andrew carried the gospel to the lands that are now Russia and the Ukraine. Then, in his old age, he traveled to Greece, where he was martyred in the town of Patras. Local Christians buried him there, but in 357 most of his bones were moved to Constantinople. In 1204 Italian Crusaders looted St. Andrew’s shrine and carried his relics to Amalfi, where they remain to this day.

In 1964, Pope Paul VI returned some of Andrew’s relics to the Greek Orthodox Church, and they are enshrined once again in the basilica built over what is believed to be the apostle’s original tomb.

In the year 44 St. James the Greater, brother of St. John, was martyred in Jerusalem—the first of the apostles to give his life for the Catholic faith. According to tradition, his body was miraculously transported to northern Spain and buried in a Christian cemetery (the Spanish believe that during James’ missionary journeys around the Mediterranean, he preached the gospel to Spain).

A popular legend says that the apostle’s relics lay there, forgotten, until 814 when a hermit named Pelayo followed a star out to an open field and uncovered the apostle’s remains. Today they are enshrined in the magnificent Cathedral of St. James in Santiago de Compostela. Interestingly, beneath the cathedral archaeologists have found a first-century Christian cemetery.

St. James the Less served as the first bishop of Jerusalem, and was martyred there: he was thrown from the roof of the Temple, and since he was still alive, then beaten and stoned to death. According to tradition, James was buried on the Mount of Olives, overlooking Jerusalem. In the sixth century Emperor Justinian II moved his relics to Constantinople. At some point, a portion or perhaps all of St. James’ relics were moved to the Church of the Twelve Apostles in Rome, where today they lie in the same shrine with the relics of his fellow apostle, St. Philip.

In July 2011, archaeologists working in Turkey announced that they had discovered what they believed to be the original tomb of St. Philip. The 1st-century Roman sarcophagus was found in the ruins of a 4th- or 5th-century church dedicated to the apostle. According to a tradition recorded in the apocryphal 4th-century document known as the Acts of Philip, about the year 80 the apostle was arrested in Hieropolis, nailed by his feet to a tree, upside down, and ultimately beheaded.

The site of St. Philip’s grave became a goal for Christian pilgrims, and the archaeologists even uncovered the broad road that led to the Martyrium, or martyr’s shrine. The shrine was destroyed in the seventh century by a violent earthquake and fire, after which the relics of St. Philip were transferred to Constantinople, and from there to Rome where they were enshrined with the relics of St. James the Less in the Church of the Twelve Apostles.

When archaeologists opened the sarcophagus in Hieropolis, they found no human bones in the tomb, so it is possible that the remains of St. Philip are preserved in the crypt of the Twelve Apostles in Rome.

Ancient tradition tells us that St. Thomas traveled farther than any of the other apostles, preaching the gospel in India, where he was martyred by a Hindu priest who ran him through with a spear. Today, a portion of St. Thomas’ bones are venerated in the Basilica of St. Thomas in Chennai, India. Somehow, most of Thomas’ remains were transported to Edessa in Mesopotamia. In 1258 these relics were carried to Ortona, Italy, where they lie today enshrined in a golden casket within a white marble altar in the Basilica of St. Thomas the Apostle.

We are told that after Pentecost, St. Bartholomew carried Christianity to Armenia, where he was martyred by being flayed alive. In 809 the relics of St. Bartholomew were moved from his tomb in Armenia to Lipari and then in 838 to Benevento in southern Italy. In 983 the Holy Roman Emperor, Otto III, erected in Rome a church on Tiberina Island in the Tiber River; he dedicated the church to St. Bartholomew and had a portion of the apostle’s relics enshrined there. So, both Rome and Benevento are the major shrines of St. Bartholomew.

The tax collector who became an evangelist, St. Matthew is said to have preached in Ethiopia, where he was martyred as he said Mass. In 954 the relics of St. Matthew were translated from their tomb in Ethiopia to the city of Salerno in Italy. The relics are venerated in the crypt of Salerno’s Cathedral of St. Matthew.

Every year, millions of pilgrims visit Rome’s magnificent Basilica of St. Peter, and most of them walk right by the altar that holds the relics of the immensely popular St. Jude, and the less-well-venerated St. Simon.

Tradition says that both apostles traveled together to preach the gospel in Persia, and both were martyred there: Jude was beaten to death with a club, and Simon was sawn in half. It is uncertain when their relics were transferred to Rome.

The eleven surviving apostles chose St. Matthias to replace Judas who betrayed Our Lord, then despaired and hanged himself. It is said that about the year 326 Empress St. Helena found St. Matthias’ grave in Jerusalem and sent his relics to the Christians of Trier, Germany. They are still venerated in Trier’s Basilica of St. Matthias.

The remains of Saint Paul

Although Saul of Tarsus ─subsequently called Paul─ was not part of the apostles who followed Jesus, he is also known as the apostle of the Heathen.

According to tradition, St. Paul was beheaded the same day St. Peter was crucified. Constantine didn’t forget St. Paul—he built a basilica over the apostle’s grave on the Via Ostia. In 2009, Pope Benedict XVI announced that after several years of study Vatican archaeologists felt confident that the remains enshrined in a sarcophagus beneath the high altar of Rome’s Basilica of St. Paul Outside-the-Walls are indeed the relics of St. Paul.

Small fragments of bone were carbon dated by experts who knew nothing about their provenance and results showed they were from someone who lived between the 1st and 2nd century. “This seems to confirm the unanimous and uncontested tradition that these are the mortal remains of Paul the Apostle”, said Benedict XVI.”

I add, dear reader, a few sentences for reflection:

“Martyrdom requires a struggle, that is, someone who challenges virtue or truth.”
P. Vitoria

“Martyrdom is a rubric of Faith.”
Fray Damián Cornejo

“The value of things depends on their merit, never on their epithet.”
Shakespeare

“Fidelity is what produces the miracles of passion and will.”
Madame de Stuël

“We suffer more as we love more. The sum of possible pains for each soul is proportional to its degree of perfection.”
Amiel

─‘Now all these things happened to them as examples, and they were written for our admonition, upon whom the ends of the ages have come.’─
First Epistle of St. Paul to the Corinthians, chapter X, v. 11.