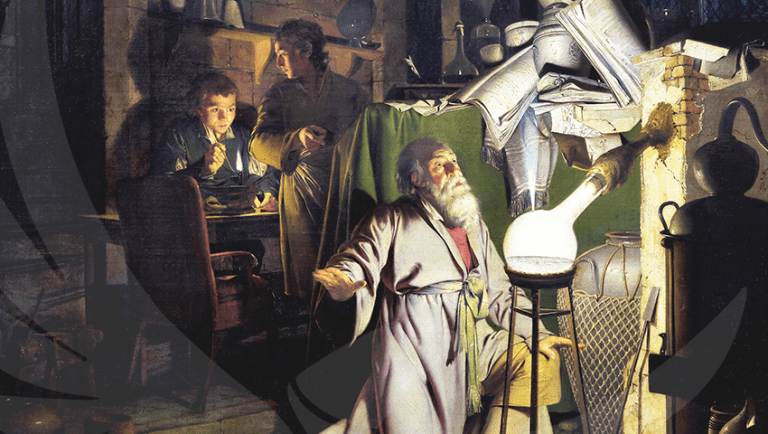 I hasten to send you some alchemical considerations from the pen of the V.M. Fulcanelli, appearing in his last work FINIS GLORIAE MUNDI, which help us to understand this abyss that exists between true Alchemy and that other false science that today is called chemistry. Likewise, in this work the great Adept makes a correlation between the cosmic Alchemy and the dangerous dealings that the rational earthly humanoid is doing in the laboratory of Nature with the horrible social consequences.

Without further ado, let us go on, then, to discuss these details that we have mentioned before and that have been portrayed in this last philosophical work by the aforementioned Adept:

“Chemistry is the science of facts, as Alchemy is the science of causes. It was necessary to keep the veil over the most fundamental arcana, the use of chemistry in the horrors of the war of the trenches could not but incite us to conceal the terrible potential that lurks in the profundities of the humblest matter.

We are not unaware of the need to preserve the few last secrets that remain obscure to profane science, and we do not intend to make the task easier for the barbarians. But, obeying the spirit that animated the ancient philosophers ─namely: alchemists─ rather than the letter that kills, the present times call for speaking loud and strong. When the thief is already in the house, there is no point in locking the door.

The precautions of the alchemists of the past being overturned, secrecy becomes the cloak of shadows that surrounds those who have deciphered, thanks to the work of physicists and biologists, the clues that they left behind. As long as the equations of the ones or the mythological symbols of the ancient Adepts are only understood by a handful of men, these bandits will reserve for themselves the power that gives the understanding of the causes and will reduce the peoples to the worst of servitudes: that of the soul.

At the end of the last century, we saw physicians renege on the oath of Hippocrates and inflict real electric tortures on the boarders of asylums and prisons, without speaking of living animals, under pretexts of research, and we thus understood that profane science was bordering on the abysses. However, we had no sign that God had lifted his ban on touching the Tree of Life.

All things considered, let us admit that it is better to test new drugs on viral cultures IN VITRO than to test them first of all in hospitals; and let us furthermore admit that remedies are tested on monkeys or rats: one could justify such sacrifices by the relief that they would later bring to the sick. But when rabbits are tortured in cosmetic factories, or cats are decerebrated to establish perfectly known sleep rhythms in man by gentler methods, then the justification is pure hypocrisy. Who is going to believe that it is a vital necessity to lacquer women’s hair?

Everyone knows or senses that with genetic engineering the last limits are being crossed, as is evidenced by the anguished debates of legislators and ethics committees. Biologists are making new viruses as the spagyricists made gold, and the adage “IT IS EASIER TO DO THAN TO UNDO” applies to them… How have physicians dared to transgress their most solemn oath to the point of researching weapons of extermination and not remedies for human suffering?

The genes introduced in maize to ward off parasitic insects have as a first consequence to incite them to modify their own genes to continue feeding. Little by little, reaction by reaction, how far are we going to go? No one would know how to predict it; just as no one would know how to anticipate the corrective mutations that the continuation of the divine work, man included, will demand. When will it be understood that the prohibition imposed on the Tree of Life is for our own protection and not for any tyrannical whim?

Let it not be said that these are the last assaults of the Kali-Yuga, an obligatory manifestation of cyclic degradation! No. This transgression goes far beyond the disorder caused by a situation of decadence. What we see is an inverted alchemy that comes dangerously close to the irremediable sin against the Spirit, and those who justify such abominations heap burning coals on their own heads.

The error of Philaletheus, applied to the social alchemy that the demiurges, heirs of the Boston alchemists ─namely: the present-day pseudo-chemists who began their aberrations in the United States─ wanted to attempt, led them to see in America the golden germ of the Stone that would transmute humanity. But this solicitude towards the CHOSEN PEOPLE, besides making them sustain all the baseness and plundering dictated by the interest of some industrialists and financiers, prevented them from truly proceeding to the opening of their pharisaical matter. Moreover, assimilating the ASTRAL SPIRIT with divine grace as conceived by Puritanism, that is to say, expressed by a peremptory law together with the impossibility of a stamp-like super-nature, the best service this America could render to the vile matter or debris of the work ─the rest of the world─ was, they believed, to subject them to some NEW WORLD ORDER. The predictable result was that they reaped but little of the true ASTRAL SPIRIT, too insufficient for the smallest truly alchemical operation.

We see in history that there are civilizations that are lost for lack of Spirit. The ancient Etruscans, a rather gentle people in their origins judging by the frescoes in their burial places, replaced it with ritualism and meticulousness in divination. The disquiet that this practice could not fail to cause increased progressively, and art shows us the soul of this people invaded by gorgons and devouring genii and succumbing under the weight of their terrors. Something of the same happened to Rome where it took the form of exaltation of the juridical even in the cult of the gods. Discussing the Roman religion, Mr. Kerény rightly observes that it lacked mythology and art: THEY TOOK EVERYTHING FROM THE GREEKS AT THE TIME OF AUGUSTUS, when the poet Virgil sought his models in Homer. Before him, except for a few accounts of the adventures of Hercules, everything religious was concentrated in the PIETAS, a set of semi-ritual or legal and half-moral obligations, whose respect was enough ─it was believed─ to satisfy the Gods and ensure the good functioning of the city. The disorder that the Roman Republic and the first time of the empire sank into is well known, despite the luminous reign of Augustus, before the dynasty of the Antonines came to reshape it.

The same disorder that besets any society which is also desiccated, subjected to the punctilious rule of regulations, deprived of the vital essence of faith and laboring under purely psychic substitutes, is growing at this time, first in America and then, because of the tensions it imposes, in the Western world as a whole. Sociologists have tried to find the cause of these evils, which they call ANOMIA, in the development of profane science or in the clattering of the industrial machine, in the primacy of the economic over the political and, recently, in the invention of the computer. Nonsense! Neither the Romans nor the Etruscans used mechanics, and they did not invent the stock exchange or electronics, and their societies also fell into anguish, orgy and the loss of the interest in living.

The West is at the extreme where the thirst begins to become intense enough to be perceived, and where the peoples seek the least drop of greenery to quench it. The multiplication of sects, practices or soft therapies, recalls the crowds squeezed into the temples of Aesculapius; and the importation of Buddhisms or yogas from India responds to the welcome given by Rome to the schools of the mysteries of Thrace or Asia Minor or of the cult of the goddess of Eleusis. As in the empire of the first centuries, the political authorities pass from repressive distrust to tolerance without knowing why, perhaps because, with such a dryness, the conscience of the thirst parts from the people, as in the crucible the avidity begins in the most intimate of the matter. It is impossible to predict how long this phase will last nor the exact forms it will take: they will go from the most delirious cults and the most obtuse fundamentalisms to the wisest Gnosis, without being able to remove from its trace the perverse magics nor the provocation of darkness……”.

Excerpts from the work Finis gloriae mundi, by the V.M. Fulcanelli

It is with enormous pleasure that I now leave you some sentences to be reflected upon:

“Ungratefulness is the child of arrogance.”
Cervantes

“It is the nature of proud and vile men to be insolent in prosperity and abject and humble in adversity.”
Machiavelli

“By the pause and the pomp the haughty one is discovered.”
Friar Cristobal de Fonseca

“Pride is the vice by which men crave for honors that do not belong to them”.
Raimundo Lulio