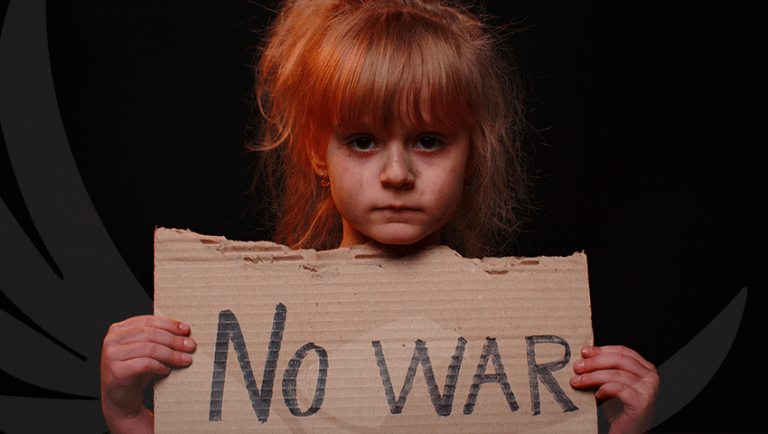 We write to you in the name of humanity that is scattered throughout the four cardinal points of our world. On this occasion to tell you that we find absolutely wrong and brutal everything that we are contemplating lately in relation to the war that is being waged in the east of our planet.

Everything points to the fact that we no longer even deserve to call ourselves men and women of the Earth, but rather animals endowed with intellect but full of totally cavernous savagery. Where have your moral, religious or philosophical principles gone? Where has the humanism that drives true human beings to fight for the welfare of their fellowmen gone? What has happened to the ethics and good customs that are so much talked about in the International Forums that you are constantly holding in various capitals of our world? Of what use has the Charter of Fundamental Human Rights been, vauntedly repeated in the sessions of the organization misnamed the UNITED NATIONS? Where is the unity of our nations? Should we only unite to go against each other?  Are we not all children of the Earth?

By the NON-OBSERVANCE of ethical principles in each one of you, the so-called art of governing –namely: politics– has been reduced to a simple inhuman competition to be above each other, and all this is justified with irrational reasoning, at the bottom of which perverse tendencies are hidden:  greed, avarice, anger, revenge, pride –patriotic, curiously enough– hatred, racism, religious fanaticism, capitalist exhibitionism or socialist falsehood –both currents loaded with lies and hypocrisies– etc., etc., etc.

All this mental perversion has led us to two world wars that punished millions of human beings by committing acts of absolute barbarity in every sense. These two world wars, like all the wars that our false civilization has lived, had a common spring: THE ECONOMY…  We look like hungry wolves devouring each other.

What is most laughable in the midst of this chaos is that many of you then attend a certain church to which you belong and there you become, for a few seconds, meek little sheep, and the height of brazenness comes when you have the guts to receive the host of consecration –in the case of Catholic or Orthodox Christians–, or perhaps when you invoke the sacred name of the Eternal in a mosque… All this is a real farce in the eyes of the true God.

The world, ladies and gentlemen who govern the countries of the five continents, has had enough of being deceived by you. People no longer believe a single word from you because we all know that what you emphasize today with zeal, tomorrow you will change it for another speech in which you will deny what you had said and promised before. That is your miserable reality, even if it hurts to say it…..

You are occupying presidential chairs, not because you are wonderful, magnanimous, honest, virtuous, compassionate, fraternal and lovers of peace and equity, no. You occupy those chairs because the peoples voted for you in an election believing in your speeches. None of you are there by divine grace. Not in the least.

You have become RASCALS and, as if that were not enough, many of you have manipulated the elections that brought you to power, leaving your hands stained with blood or dirt because of your tricks. Do not deceive yourselves, ladies and gentlemen, the whole world is watching you and is verifying, once again, that you are execrable liars. Many of your actions are immoral and lacking in credibility.

What is happening right now in Ukraine is the strongest proof of what we are asserting here.

You will probably laugh at our words and comment among yourselves: What do these poor people know of politics? What university did they attend? What degrees support them? Etc., etc., etc.  To which we answer: It is not necessary to attend universities to be good citizens. Intellectualoid titles are not necessary to do good to our fellow human beings and seek prosperity in our societies. There is no need to be left or right, politically speaking. All that is needed is A RIGHT WAY OF FEELING, A RIGHT WAY THINKING AND A RIGHT WAY OF ACTING, and, unfortunately, that is not what shines in your persons……

The time has come for great reflections because, unfortunately, because of your lack of dignity we are about to begin to experience a Third World War in which there will be millions and millions of victims who, unfortunately, went to the battlefields to defend the lies that you will have instilled in them with your harangues. Enough of the deception of our humanity!  And if you still have some shame left, use it to stop the carnage you have begun to provoke again. History is an inexorable judge and one day you will be judged before the verdict of the Public Conscience, because, believe it or not: the truth one day comes out!……

And when we talk about history and its judgments, we do not do it without arguments to back us up. Suffice it to recall Mr. Stalin and his purges in Russia at the time of Bolshevik communism. We also remember Mr. Nikita Khrushchev and his savagery in Hungary. We also have in our collective memory Mr. Fidel Castro Ruz, who not only brought to the wall those who disagreed with his ideas but also poisoned all of Latin America with his pseudo-revolutionary concepts of a Marxist kind. We cannot forget the monstrous Mao Tse-Tung, who, in addition to being an atheist, executed thousands of Chinese men and women for not communing with his fanatical Marxist-Leninist creed and, as if it were not enough, he annexed the country of Tibet without any scruples, his soldiers raping many Tibetan nuns in the streets and looting and burning the temples of the Buddhist faith of those latitudes. It is also impossible to forget Messrs. Eisenhower and Richard Nixon, who, wanting to implant brutal CAPITALISM, unleashed the well-known Vietnam War, in which fifty thousand North Americans and more than one hundred thousand Vietnamese lost their lives. In short, it is a long list of cases that filled our humanity with pain and that we can never forget.

Knowing that our words will be ignored by your arrogance and petulance, we send our greetings to all of you.