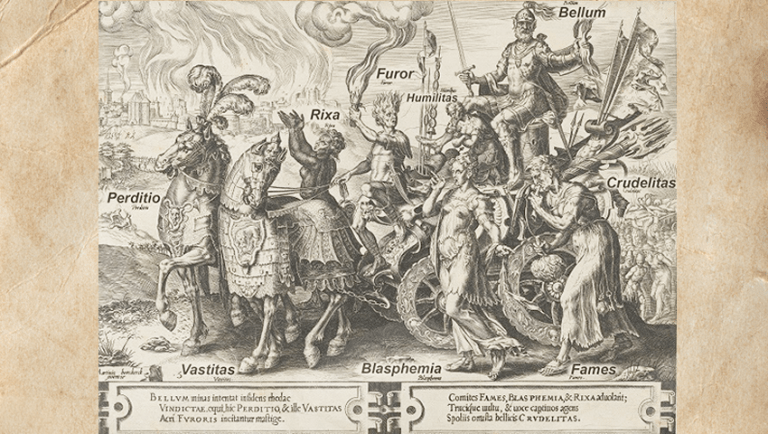 …THE TRIUMPH OF WAR

This engraving was made by the Dutch painter named Marten Jacobszoo van Veen between the years 1498 and 1574. First of all, I send you some brief comments that have been written about this famous painter, let us see:

“The engraving we present is a copy of Maarten van Heemskerck’s original drawing, made by Cornelis Cort, another famous Dutch engraver.”

The translation of this sentence expresses to us: ‘THE WAR threatens, sitting in the carriage of VENGEANCE. The horses of RUIN and DEVASTATION are always driven with the whip by fierce RAGE. Accompanying the procession are FAMINE, BLASPHEMY and DISCORD, which come running; the massacred faces and the voice of the captives lead to CRUELTY, the booty of war.’

This work of art makes us enter into profound reflections, especially now, in the moments that our humanity is living. It is unquestionable that war is the most atrocious expression of the plurality of our abominable animal Ego. As we have said on many occasions, the psychological aggregates, when they express themselves, do so accompanied by each other. The “I” always acts in a gregarious way.

Let us observe clearly how WAR is unleashed by the action of the EGO. War, personified in the engraving, is seen carrying in his right hand a sword and in his left hand he carries a fire. That sword is the sword of VENGEANCE and the fire is the materialization of the poisonous sulfur that all human beings carry within our occult anatomy.

In the image HUMILITY ─Humilitas─ can be seen being crushed or humiliated by war, because we all know that when there are wars the adversaries who fight each other abandon all humility to let themselves be swallowed by the PRIDE that, according to them, will make them the winners in the long run.

It is clear that war, when it is expressed, does so with FUROR, that is, with rage or unbridled anger. This FUROR is represented by the coachman who directs the carriage of death. Furor or rage blinds the understanding of the human being and, obviously, totally clouds the three percent Consciousness we possess.

In every war DISCORD, called RIXA in Latin, is present. The “I”, being the lair of RESENTMENT, sows what we call DISCORD wherever it goes.

We can also observe that one of the horses that pull the carriage is called PERDITIO in Latin, which must be interpreted as PERDITION or RUIN, because nothing edifying can be expected from the action of war. Every war leaves a remnant of CONFUSION, PERDITION and total RUIN in human societies. If we observe carefully, this horse carries a shield that shows a cynical smile, and on said shield two snakes bite each other signaling the animal passions…..

The other steed is called VASTITAS, which is to be translated as ‘DEVASTATION’. For this reason, this horse carries another shield that shows a lion –fierceness– devouring a sheep –meekness–. Our world has already been devastated by two world wars that have left it greatly devastated. What is incredible is that our race has not drawn any lessons from that DEVASTATION, because we are marching, unfortunately, toward a third world conflagration.

In this striking engraving we can see a woman who has her tongue out. The woman is named BLASPHEMIA. We cannot overlook the blasphemous and DIRTY language that is used during periods of war. Precisely in our days, all the wars of the earthly humanoids are accompanied by real verbal atrocities. Observe the politicians of today and we will draw our own conclusions.

We could not fail to mention the famines that wars produce both for the vanquished and for the stupidly called winners. That is the name of another woman who accompanies this sinister carriage. The woman representing famine is called FAMES in Latin. She, the representative of famine, marches in a pose of chewing a bone, because during famines we can only eat garbage or bones. That is the reality of wars.

Finally, it is good to mention CRUDELITAS –cruelty– represented in the engraving by the multitude that has been taken prisoner and with that multitude all of its belongings. That is the booty of war that the rational biped usually takes to his terrain. He has done so for millennia. We would say that this has happened since Cain killed Abel. This has been the sad story of this human anthill.

We could also point out that in this spectacular engraving we observe instruments of war in the back of the carriage. And, unfortunately, when the “I” controls the intellectual center, it does not cease to want to invent war machines that serve to destroy and devastate its fellow men. We must also emphasize that the flags that appear on the back of the carriage remind us that, since the “I” became powerful within us, it chose to want to establish borders and to demarcate boundaries to want to differentiate ourselves –egotistically– from each other. This began in the Bronze or Copper Age.

In the background of the engraving, we observe a city engulfed in flames and the multitude that has been taken prisoner. That is the unequivocal consequence of wars.

Let us now reflect on these sentences that I add for you:

“War is a cloak under which murder drapes itself.”
Victor Hugo

“War is an attack on mankind.”
Pliny

“There is no greater enemy of nature than war.”
Saavedra Fajardo

“There has never been either a good war or a bad peace.”
Gracián