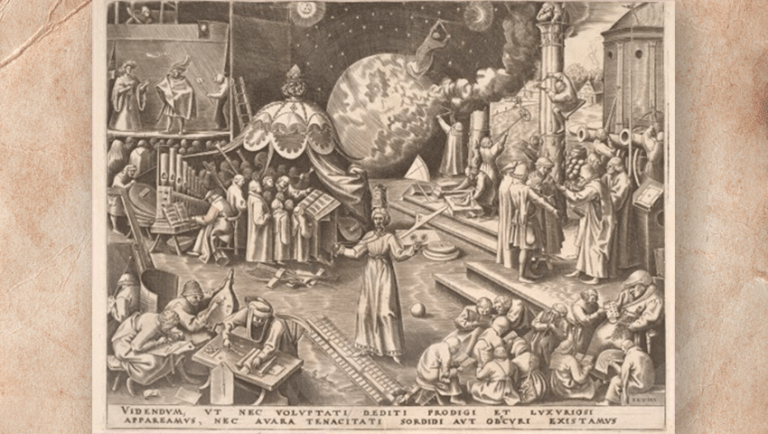 With immense pleasure I send you the explanation of this engraving that is entitled:

This engraving was made by Pieter Brueghel the Elder between 1526 and 1569. In reality, it was a series of engravings that in his time were baptized as the world of the seven virtues.

“Religions define the seven deadly sins and their opposites, the virtues: anger and serenity; greed and restraint; lust and chastity; gluttony and temperance; envy and altruism; laziness and willpower; pride and humility.

But it also speaks of the seven virtues probably in the sense of characteristics that must accompany and encourage a soul on its spiritual path. And they are also seven, four that the classical philosophy –Plato– names “cardinal virtues” –from the Latin cardinalis meaning ‘principal’ or ‘fundamental’–: prudence, justice, strength and temperance, which assimilated by Christian theology will add three others, called “theological virtues”: faith, hope and charity –love–.

It is also said that the first four are considered fundamental because they restore in one the “normality” or authentic humanity, and then develop the other three that are divine gifts and that unite the human part with the divine part”.

However, it is good to know that in this engraving the need for a merely moral virtue is not emphasized for us and neither temperance as a contrary to gluttony, but rather the need for temperance in the ALCHEMICAL ART.

There are some interesting comments that support this idea:

“In antiquity, temperance was identified by the word soprhosyne, which normally implied self-control or chastity rather than moderation, robustness of mind, self-knowledge… In other languages, there is not a single word that is a simple equivalent –for soprhosyne– but sometimes it translates as prudence, self-control, moderation or temperance.

Already in Carolingian times, temperance carried a torch and poured water with a jug….. The presence of these attributes refers us to patristic sources, for Julianus Pomerius –a Christian priest in 5th century Gaul– explains to us that the main activity of temperance is to extinguish the flames of passion: Ignem libidinosae voluptatis extinguit / It –temperance– extinguishes the fire of lustful pleasure.”

Description of the characters:

At the top, on the left side of the engraving, it is easy to see a couple who are in a scene in a theater with an audience and orchestra. These are the two protagonists of the story and the protagonists of the Great Work. On the right we see two columns: one that several characters measure with a lot of instruments –square, compass, lead wire, etc., etc.– and the other column that, in midway is covered by the clouds of a starry night, with a sun and a moon in the firmament. There the macrocosm –the Universe– is alluded to and the Earth represents the microcosm. Both cosmos correspond to each other because what is above is as what is below and vice versa, what is below is as what is above. Everything is controlled by the Sun and the Moon, primordial reference to the Gnostic Arché constituted by the two primordial substances ─Sulfur and Mercury─. Therein lies the reason why we see two men trying to measure the Universe and the terrestrial globe, because there is a need to know that all the laws of the Universe are also contained in the human being.

These two columns point out the need for them to be created within us by means of great industriousness, that is, with a lot of patience and taking into account the fundamentals of the alchemical work. Both columns clearly point to the SULFUR and the MERCURY of the Secret Philosophy.

Very interesting is the stone on which a man is drawn and that a worker measures with a square. All these little men that we see in this engraving represent the various parts of the BEING helping us in the crystallization of our Stone. In this meticulous work, we must always remain in the RIGHT WAY OF FEELING, RIGHT WAY OF THINKING and RIGHT WAY OF ACTING; that is what the square stands for.

The divine woman who appears in the center of the engraving and has the name TEMPERANTIA embroidered on her clothes ─allusion to temperance─, stands on the blade of a windmill ─to point out that in this work the art of knowing how to breathe comes into action─ and with her right hand she holds a bridle placed over her mouth. The latter indicates the need to always keep the verb, the word, moderate. She is accompanied by many other symbols: a clock on the head, which indicates the times and times of inner work. She also carries two keys in her left hand, which again allegorize the Sulfur and the Mercury of the sages. She also carries a book next to her left shoulder. This book sets the rules of hermetic art and this is corroborated by a ruler that appears next to it. Next to this ruler we observe a base of a column and a sphere. The base of the column tells us that we need to have good ethical foundations to succeed in our goal and the mini-sphere reminds us of the primordial seminal chaos that has to be transformed and transmuted.

At the bottom right is a group of disciples —parts of our BEING— studying in a book in which it is written A, B, C, D…, as an alphabet, probably meaning the foundations of the alchemical art. A little higher up there are two characters trying to hunt a bird that is on the dome of a church, one with a bow and the other with a rifle, and next to them are two war cannons and ammunition. These cannons reflect the great struggles we need to maintain until we reach our objectives. All the latter is to show us that we must hunt the volatile element –Mercury– in some way, either with the bow –which when braided alludes to the triangle, which symbolizes the three primary forces of creation– or with the help of a firearm –alluding to the fire of eroticism–.

Finally, we see a phrase written in Latin:

Translated it tells us:

‘IT MUST BE SEEN SO THAT NEITHER SURRENDERED TO VOLUPTUOUSNESS WE APPEAR DISSOLUTE AND LUSTFUL, NOR BY PETTY GREED DO WE EXIST DESPICABLE OR DARK ‘.

We must take care that, devoting ourselves to voluptuousness, we do not become wasteful and lustful, but also that, due to petty greed, we do not live in filth and ignorance. Hermetic art needs to be practiced out of love for divinity, turning our voluptuousness toward what is sacred and avoiding coveting material or spiritual powers that make us petty.

Our readers must also observe that in this engraving, in the central right part of it, the alchemist can be seen negotiating his work with representatives of the Law. One of these characters who is advocating for the alchemist before the Great Law is carrying a bag of gold coins around his waist. Undoubtedly, it is dharma that must be used so as not to be stopped in our march.

On the other hand, in the central left part we see a kind of choir that is singing and behind it, people are seen playing musical instruments. It should be known that many ARS MAGNA scholarsrelate the work of the Philosopher’s Stone to music. That is why in many reliefs of many Gothic cathedrals it is easy to observe angels playing violins or in a pose of singing.

Also, in the lower left part of the engraving a man can be seen holding in his hands a BELLOWS. This instrument is reminiscent of THE BLOWERS, an adjective that was used in the Middle Ages to point to the alchemists.

For their part, two other alchemists are drawing up plans on a table, all of which gives us the understanding that we need to know the Esoteric Path and therefore we need a route that the treatises will show us to reach our goal.

I now add a few sentences for you to be reflected upon:

“Do you want to be rich? Well, do not strive to increase your assets but to decrease your greed.”
Epicurus

“Those who covet many things will need many more.”
Horacio

“The greed of riches has enslaved men to the point that it seems that they do not possess the riches but are possessed by them.”
Pliny the Younger

“Greed takes over and blinds all powers.”
Vincent Espinel

“Greed brings with it a determined will to do evil.”
Father Mariana