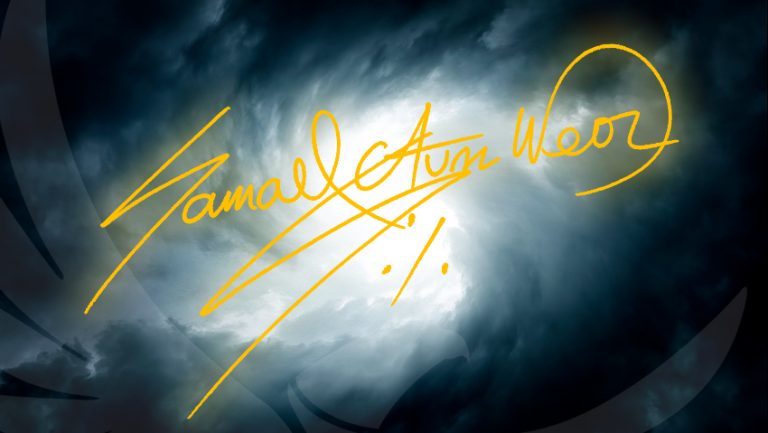 Today I send you these words of the Avatar derived from an interview I did with the V.M. Samael Aun Weor a long time ago, here it is:

SAMAEL AUN WEOR IS NOT A PSEUDONYM

“Question: Venerable Master, what is a Cosmocrator?

Master: A sacred individual belonging to the Army of Cosmocrators from the dawn of the Maha-Manvantara.

Question: Why is SAMAEL categorized as a Cosmocrator in the esoteric dictionaries?

Master: Because my PROFOUND INNER REAL BEING is one, but for me, as a person, I consider myself a vile earthworm, something that doesn’t have the slightest importance. But if you want to refer to MY PROFOUND INNER GOD, He is indeed a Cosmocrator.”

Question: Venerable Master, many people think that SAMAEL is a pseudonym and that your real name is another…

Master: I will tell you a great truth: it so happens that Samael is not a pseudonym at all. Everyone has the belief that it is a pseudonym; in reality, I am SAMAEL.

You may have heard and read in Kabbalah, that Samael is spoken of and defined as the regent of planet Mars, as an Angel, and he is also defined as a demon. Well, the harsh reality of the facts is that I AM SAMAEL and I say quite frankly: I am. If I would have to go in front of the firing squad for saying who I am, I would gladly have the courage to go; so, I don’t have any pseudonym…

Why is it said that first I was an Angel and then a demon? Simply because on the central plateau of Asia, when the Aryan Race started existing on the face of the Earth, I then made the mistake of Count Zanoni. I had an immortal body, that is, a Lemurian one; I saw Lemuria sink over 10,000 years, in the Pacific Ocean; I knew Atlantis and I accompanied Manu Vaivasvata in his exodus; then we fled from Atlantis with the SELECT PEOPLE toward the central plateau of Asia. I preserved the same physical body.

Unfortunately, I repeat, I made a mistake on the ancient Asian continent, in the Himalayas. There were different kingdoms and I went to one of those kingdoms together with all those who had managed to save themselves from the Atlantean catastrophe. I had been forbidden to take a wife ─because the SONS OF GODS are forbidden to take a wife, we no longer needed one─, but I did not obey and failed in that respect. So, I took a wife. As a result, my Divine Mother took me to a deep cavern and showed me the fate that awaited me. I saw rain, tears, mud, sickness, misery; I saw myself as a Jew roaming among all the peoples of the Earth…

I asked her to forgive me, but it was of no use anymore: I had made a blunder! Conclusion: already fallen, they took that splendid, immortal body of Lemuria from me, and I was subjected to the wheel of births and deaths like any neighbor’s child, like any other…

That is why I say: my Real Being is certainly the Monad, regent of planet Mars. As for me, I had become a fallen Bodhisattva, turned into a true devil. I was doing very badly, down in the dumps, but in this existence, I understood the need to eliminate all the psychic aggregates and to realize the Great Work and return to the Father.

So, I am speaking to you with the heart in my hand: I am SAMAEL AUN WEOR, that is my name as a Bodhisattva. SAMAEL is the name of my Monad…

I am conscious of the dawn of life; I witnessed the dawn of creation; I am here, with humanity, since the beginning of the dawn, since the heart of the Solar System started to beat after the deep night of the Great Pralaya.

I came here because I was sent by my profound inner God, my Father who is in secret, with the aim of serving humanity, and I believe I am serving, I am working for humanity. I remained fallen for a few centuries, of course, but thank God, I have already risen from the mud of the earth and I am dedicated to doing the Great Work of the Father.

So, I say what I have experienced.

I’m inside this body to help humanity. But in the name of the truth I say to you: I AM ARCHANGELSAMAEL…! If the fools don’t believe it, I don’t care, if they laugh, I don’t care either: I say what I am without caring if they believe, if they don’t believe, if they laugh, if they doubt… That’s their problem! The only thing that concerns me is to say what I am when I am questioned and to teach the doctrine, which is an order from the Father, from my Father who is in secret…

Now I am going to tell you something extraordinary. When I reconquered in my present existence ─I say reconquered because I already told you that I was a fallen Bodhisattva, who had to fight to rise again─ the degree of QUALIFIED Adept, obviously I was received in the Causal World, because in the Causal World is the temple of the Great White Lodge… Inside the temple, the Adepts made completely militarized parades; everyone greeted me with the Gnostic salute; the movements inside the temple were completely militarized. They paraded before my insignificant person who is worthless, only to welcome me, to receive me as they do with any Adept who is received in that region.

The transmission was done telepathically. I did not see a single smile in all the Adepts. There were Chinese, German, English and French Adepts, and from all parts of the world, Adepts that are working in the Great Work of the Father. But not a single one of them was smiling, there was a tremendous seriousness in all of them.

The whole transmission given to me was done telepathically; without words, I was told about the great event that is going to take place and that is already at the door, about millions of human beings that are going to perish by fire, water and earthquakes, about wars that will come beforehand, about the famine that is awaiting us, about epidemics, about the terrible desolation… All in all, there was no joy or smile in them, there was no time for smiling, but a terrible severity… I was made to understand the great responsibility that weighs on my shoulders, which is to guide the World Salvation Army. This is how I understood it. The transmission was telepathic.

So, an army needs to be established, and before the great catastrophe comes, that army has to be secretly taken out, taken to a place. I know what that place is, but if I say it, it would be detrimental to the work of the Father. Nothing is going to happen to them in that place. The brothers of that army, the brothers who truly prove that they are working on themselves, will be taken to that place in their hour, in their day; in their moment they will be given the notice: “Brothers, the time has come!”, and we will gather to go to that place, from where we will contemplate the duel of fire and water for centuries; fathers and sons, all of us, must contemplate that duel.

After two centuries, when new lands emerge from the bottom of the seas, this select group will live on those new lands and will become the nucleus of the future Sixth Great Root Race. Obviously, during this period, the Earth will be enveloped by fire and water vapor; during this period, the Ego will have to be completely dissolved, because in the new Age, in the Golden Age, no physical body will be given to someone who has Ego, because just having one person with Ego, that would end the Golden Age, it would corrupt the Golden Age, it would damage it, this is the harsh reality… In the Golden Age, there will be no borders; it will be a transformed land, a regenerated land.

Besides, facts are facts: Hercolubus is already in sight by the telescopes, so what else do we want?

So, the aim of these studies is precisely this: to prepare a group of people to serve as nucleus for the future Root Race; this is fundamental… If you cooperate with the Sun, if you work upon yourselves, you can be part of that nucleus.

The catastrophe is at the door, but the people who are hearing, do not hear, and seeing, do not see…

Many years ago, when I was very young, it was revealed to me in the superior worlds what I am telling you here; then I knew that I had to fulfill this mission, and I saw myself like this, in front of you, in front of groups, telling you what I am saying now, and I also saw, with my clairvoyant faculty, Hercolubus; I saw myself, through the time, how I would later speak to people, telling them this; I saw that many believed me and that many others paid attention to me but did not believe me, they doubted me, they laughed; I also saw myself on the streets, speaking to people but they did not believe me. But in the end, the catastrophe came and killed everyone, so what I am telling you will be fulfilled. In this way I spoke to the Atlanteans and they laughed. The day they saw themselves “in a bind”, as we say here, they wanted to follow us to see if they would be saved, but we left before they woke up……..

I will now cite a few sentences for reflection, dear friends:

“Certain presentiments that impress the soul are sometimes the omen of what one fears.”
Pope Pius X

“Prudence is stronger than a wall, because it neither collapses nor can it be undermined.”
Antisthenes

“The peoples will be happy when they are governed by prudent and judicious men.”
Plato

MAY THE ETERNAL BLESSINGS OF PARABRAHMAN BE WITH YOU ALL.
KWEN KHAN KHU