VOPUS Gnosis > Articles > No one knows himself 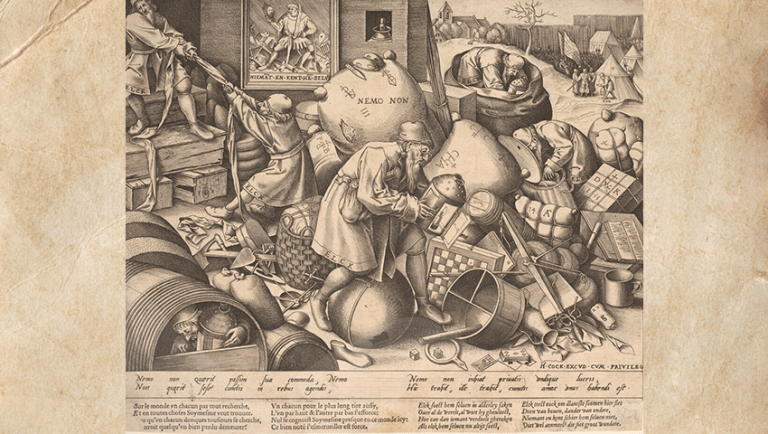 I am pleased to send you, on this occasion, an engraving made by the painter Pieter Brueghel, the Elder, between the years 1526 and 1569. This engraving is entitled…

…NO ONE KNOWS HIMSELF

Let us start, reader friends, by some considerations that are worth observing, let us see:

At the top left, a painting with a man in a medieval costume looking at himself in a mirror, and below the image is written in Flemish language: “NIEMA[N]T. ES. KENT. SELVE[N]’, ‘no one knows himself‘…….

There are a total of eight figures with the same character, ELCK –a word that means ‘each one’ or ‘anyone’ in Dutch–. Two, near the painting, pulling a cloth. Three of them carrying a lantern in their hands, search among the bags that have some numbers and written symbols, boxes, objects… In the background two other characters are seen, one searching with his lantern next to an army and the other, further ahead, is on the way to a church. And the eighth, at the bottom left of the engraving, is placed within a barrel, reminding us of Diogenes. It is surprising that all around, in addition to bags and drawers, there are measuring instruments that seem abandoned: a scale, an axe, a ruler, a chessboard, dice, tarot cards, a pair of scissors, an overturned pitcher…

In the center of the engraving, on a bag, is written NEMO NON, ‘NOBODY NO’. Above the bag is a knife and what look like some stones or loaves of bread…

The old man, ELCK, is looking for something, but although he has glasses and a lantern, it seems that something is going wrong in his search, according to the Latin phrase: Nemo non quaerit passim sua commode, Nemo Non querit sese’ cunctis in rebus agendis, Nemo non inhiat privatis undique lucris, Nemo non inhiat privatis undique lucris. Hic trahit, ille trahit, cunctis amor unus habendi est.

Interestingly, the character –who is the same in the eight postures described above– with the lantern and his search, on the one hand reminds us of the wise Diogenes, but on the other hand on his clothes is written ELCK, which means that he represents any of us.

There are two prayers at the bottom in Old French and Dutch.

‘All over the world, everyone is looking for himself in things and it follows that more than one will be lost. Everyone pulls the blanket toward him. No one will know himself like that, and if he understands this, he will draw strength and marvel from it.’

What does all this mean, avid reader?

What is very clear in this engraving is the pictorial representation of the eternal search for our reality and our failed attempt to find it among material things. Man has always sought outside, in the material world, what he carries within himself, and this sad endeavor only leads us to confusion.

The ancient Greeks left inscribed on the frontispiece of the temple of Delphi: HOMO NOSCE TE IPSUM, ‘Man, know thyself’, and according to many scholars that phrase continued to give us to understand: “And you will know the Universe and the Gods that inhabit it”. Eternal Gnosis has always explained to us that all the truths contained in the Macrocosm are also collected within man –the Microcosmos–.

However, despite this having been repeated millions of times, the stubborn mentality of the human masses has paid no attention to what that phrase has been telling us for millennia. Always, the earthly humanoid has sought to find the happiness and the raison d’être of his life by searching for material things, all of which is a total absurdity.

That is the reason why we see in the background a character dressed in the medieval way looking at himself in a mirror. This reminds us of that phrase that in one of our ceremonials tries to emphasize to us: “Look at yourself, be your own judge, make an examination of Consciousness and correct yourself, etc., etc., etc..”

On the other hand, we are shown that this brazenness occurs in all orders of the life of human beings. That is the reason why we can see the same individual with glasses repeated in several scenes and always in an attitude of looking for something… Therefore, that same character is called ELCK, which translated means ‘anyone’. Unfortunately, we are all cut from the same cloth. In several moments of these scenes the little man even carries a lantern and that is still of no use to him… Why? Because it is, in this case, the intellectual lantern, not the lantern of inner enlightenment.

Something interesting that is good to highlight is the fact of the disorder in which the old man who represents any of us is plunged. We see there all kinds of objects, bags, scissors, watches, tarot cards, magnifying glasses, cups, compasses, rulers, etc., etc., etc., thus indicating to us that this blind search affects all the varied aspects of our lives…

In the center of this engraving we see a large bag with two words written on it: NEMO NON –translation: ‘NOBODY NO’–, and on top of that bag we see two loaves of bread and a knife. What is all this? Answer: Those two words with those loaves and the knife are telling us: NO ONE SEEKS THE BREAD OF WISDOM AND NO ONE USES THE KNIFE OF CONSCIOUSNESS TO DIGEST IT.

In the upper left part of this famous engraving we see two characters pulling the same cloth or towel. That is the eternal struggle in which humanity is immersed trying to obtain for itself the truth, to be right, but in reality they only struggle to be bottled up in their dogmas…..

The character who is in the center carrying in his hands a lantern does not even notice the fact that between his legs is the orb that represents the metallic chaos or Mercury of the sages. Thus has been, appreciated readers, our humanity, always looking outwardly for the truth among material and illusory things, ignoring that we carry the treasure that we seek within us.

In this state of profound sleep there are two little men that we see in the background of the engraving: one who goes with his religious embottlings to a church and another who is heading toward an army. Both situations reflect that, wherever we are or whatever it is that we are doing, as long as we have the Consciousness asleep we will not find what we are looking for…..

I now propose a few sentences for you to be reflected upon:

“It is convenient to meditate one day after reading an hour.”
Massillon

“Oh, delight of mediocrity! Not being able to think, isolating oneself in unconsciousness! To be able to get excited about a bike!”
Ruben Darius

“He who knows a lot is not great but he who has meditated a lot.”
Settembrini

“Work as if the maxim of your will and conduct were to be declared a universal code for all beings.”
Emmanuel Kant

The mystery of the Christ will