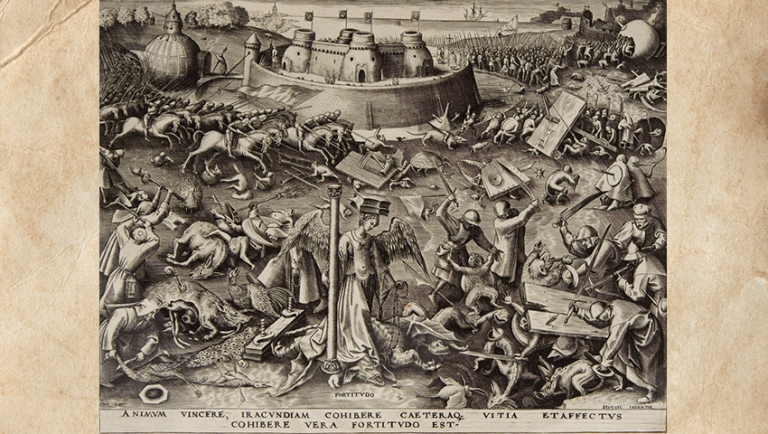 This engraving also belongs to the painter Pieter Brueghel, the Elder, and its title means ‘FORTITUDE’.

First of all, I send you some comments:

“Fortitude, as one of the cardinal virtues, has been the object of reflection by thinkers since antiquity when the foundations of this concept were laid. This virtue consists of important visual antecedents, both mythological –the hero Hercules– and biblical –Samson–. […]

This virtue did not manifest itself visually in antiquity as an allegory, but was identified with the famous hero Heracles/Hercules, who well represented all those qualities and functions that thinkers attribute to this virtue ─courage, constancy …─.

In the Middle Ages, the image of the warrior dressed in chain mail, helmet, shield, spear and sword was the most recurrent when visualizing fortitude.

In the 13th century the trend of representing fortitude by means of a warrior image continued, as we find in the various editions of the Speculum Virginum or in the French Gothic cathedrals. Both at Notre Dame de Paris and at Amiens and Chartres, fortitude is represented by courage, a woman –by her long garments– armed with spear and shield in order to endure all difficulties with an unwavering spirit. Fortitude represented in the reliefs of the French Gothic cathedrals, in addition to presenting the typical warrior aspect, holds a shield that carries a lion as its motto. This is also repeated in the cathedral of Reims […]. The presence of the lion next to this virtue is not surprising considering the visual background based on Heracles/Hercules and especially on the first of his works, the Nemean lion.

Although the image of fortitude offers a clear continuity throughout the Middle Ages, from the 14th century a new attribute emerges. In a vault of Santa Maria Novella ─Nardo di Cione and Giovanni del Biondo, 1355-1360, Florence─ we find fortitude with the traditional lion’s head as a helmet and with a column. […] The column is an emblem of its constancy, a representation of strength because it is to a building what strength is to a man.

In this case, the engraving of Pieter Brueghel depicts fortitude as a woman with angel wings, holding a column with her right hand and with her left hand holding a beast that she has subdued under her feet. Above her head she has an anvil. In the center of the engraving is a medieval fortress with four towers, protected by a retaining wall and surrounded by a water channel. Outside the fortress, at the four cardinal points, fierce battle scenes between warriors and grotesque animal forms that undoubtedly represent human defects. Historians comment that in the mid-15th century a new type of symbolic virtues emerged loaded with iconological attributes that are difficult to decipher. The origin of this iconography was located in Male in France, but later studies have shown that, despite not knowing the primary source that formed it, it would have appeared in the French and Flemish environment, having reached Castile through the circulation of enlightened manuscripts. It is very likely that these symbols, difficult to decipher, belong to the language of the alchemists.”

Translation of the Latin phrase: ‘Overcoming pride, curbing anger and curbing other vices and passions is true fortitude’.

We find ourselves, dear friends, with the very clear representation of the virtue that FORTITUDE represents. Such a virtue appears in us the closer we get to the BEING. That is why it is said: The BEING can do everything –he is OMNIPOTENT–.

There is no doubt that fortitude is intimately linked to CHASTITY. Therefore, the more chaste we can become, the greater our fortitude will be in the face of the various vicissitudes of our existence.

This virtue, like many others, we see represented in a woman –for the virtues are the gems of our Divine Mother–. That woman appears winged, carrying in her right hand a column and with the left she is seen subjecting an aberrant beast –symbol of one of the many psychological aggregates that we carry within–.

It is interesting to see above the head of that woman an anvil, which comes to represent the capacity that fortitude hasto endure all the physical and moral weights that may threaten our material or psychic life.

It is unquestionable that this virtue allows us to stand firm like the column of a temple, which is why this woman holds one with her right hand. Master Samael himself tells us in several of his works that the word virtue has a root that links it to virility, such a root is vir, and this reminds us of the virtues that we have to obtain.

It is for this reason that we have previously emphasized that the virtue of fortitude is closely linked to the transmutation of our sexual secretions, that is, to our chastity. Normally, weak people, sexually speaking, are not strong at all…

It is curious that, in the same way, architecturally speaking, when a building is built that serves to defend us militarily from our enemies, we call it a fortress [translator’s note: fortaleza in Spanish, which also means fortitude]. That is the case of our engraving, because in the central part of it we can see, indeed, a military fortress with its four towers directed to the four cardinal points. That fortress is our spiritual life, which we must protect above all against the constant attacks of our ten thousand aggregates. That is the significance of the bloody battles that we observe being fought in the vicinity of that fortress. This fortress –observe well– has waters surrounding it to prevent the enemies of the BEING from approaching it. Those are the mercurial waters, which are the basis of our inner work.

It is interesting to state that in these struggles we see armies fighting against grotesque animal forms, and this reminds us of the various autonomous and self-conscious parts that constitute our Real Being attacking the multiplicity of the pluralized animal Ego.

Above, in the background of the engraving, a sea can be seen –the sea of the alchemist philosophers– and a sailboat representative of the alchemical journey carried out by the devout alchemist.

It is not necessary to comment that the search for our divine identity involves a great many battles, and to endure them with all the weight they entail we will always need this magnanimous virtue that we call FORTITUDE.

The Latin phrase emphasizes the need we have for this wonderful virtue so as not to give up our longings and not to let our animic states weaken, which are so necessary to keep us firm on the Secret Path.

Let us now add a few sentences that, eloquently, are linked to all the aforementioned:

“There are afflictions in which we find no comfort in anyone and in which a strong heart can appeal only to its own strength.”
Schiller

“The strength is growing in proportion to the load.”
Thomas

“Nothing is so difficult that fortitude cannot achieve it.”
Julius Caesar

“True fortitude is that which makes us inflexible whenever it comes to virtue.”
Plutarch

“Not much power, but suffering it, is the real fortitude.”
Antonio Lopez de Vega