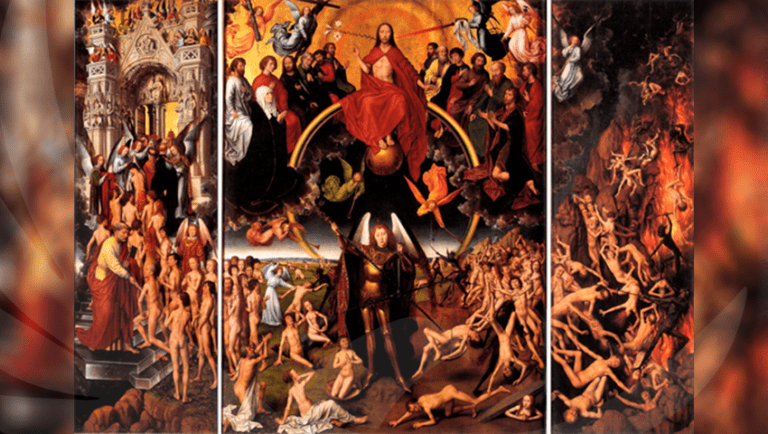 I am pleased to send you, on this occasion, this other work of art attributed to a painter named Hans Memling, which was made between the years 1466 and 1473, that is, in the middle of the Middle Ages. This triptych is entitled…

There are a great many details surrounding this magnificent artistic representation.

On the left side we see represented the entrance to the heavens, the souls being received by Saint Peter, that is, by the one who symbolizes the work with the Stone ─sex─.

On the right side, we see the lost souls falling into the depths of hell, that is, involuting.

The central part of this work is very interesting, because in it we see the V.M. Aberamentho sitting on a rainbow, symbol of hope to obtain eternity. The blessed Aberamentho has his feet placed on a golden globe –an allusion to the Sulfurized Mercury–, the origin of all the glories obtained by those who have self-realized and have united with their intimate Christ.

In the lower part, we can see the Archangel Michael separating innocent souls from those who have preferred the world of darkness. This Archangel carries in his left hand a scale and in his right a staff. The scale refers to the judgment of the Great Law upon the nations; the staff indicates the need we all have to raise our Serpents upon the rod. Let us remember the rod of Moses, the staff of the Patriarchs, etc., etc., etc.,

The V.M. Aberamentho appears surrounded by his Twelve Apostles, who are the twelve most elevated parts of our own BEING.

Nearby, on the right side of the Great Kabir, we see a woman dressed in black who undoubtedly refers to Mary, the Divine Mother who always accompanies her son on his via crucis.

It is wonderful to see near the Archangel Michael a repentant soul who is in a praying position, while on the other side of the mentioned Archangel a soul being discarded is seen. This is how the Great Law acts, friends.

Above Archangel Michael, we can observe Angels who sound their trumpets as if warning humanity that the end times have already arrived and that everyone must be held accountable for what he has done with his life. Precisely, dear friends, this selection has already been made by the Lions of the Great Law and for that reason, the order has already been given to launch the global apocalypse.

Something quite curious is to observe in the upper part of the triptych, in its central part, above the V.M. Aberamentho, four Angels that carry, each one, one of the instruments of martyrdom to which the intimate Christ voluntarily submits himself. Thus, we see an Angel carrying a column, the one to which the Kabir of Galilee was tied and where he was heavily whipped. Thus the psychological aggregates that we carry within us attack our inner Lord. Furthermore, we see another Angel who carries in his hands a crown of thorns with which the Adorable One is crowned, a crown that confirms the harshness of the Secret Path.

It is also good to point to that other Angel who carries the cross on which the martyr of the Calvary will be crucified. Let us remember that the cross has several esoteric meanings, and it is with the incessant crossing of the Secret Mercury together with the Philosophical Sulphur that the Great Inner Work will develop in the occult anatomy of the Adept.

The Angel who carries in his hands the crown of thorns also carries a sudarium and a lance. This lance was used to stab the side of the Lord of Perfections, and from that wound flowed blood and water according to how the early Christian tradition commented on it, and so do our ceremonials of advanced chambers.

On one side of the neck of the Redeemer we can see a flowering rod. Blessed are those in whom their rod blossoms, for that means that their work has borne fruit.

Now then, it is worth asking ourselves why those aforementioned Angels bring those instruments of martyrdom themselves. ANSWER: Because the very parts of our Real Being contribute, through their wisdom, with what is necessary for our Chrestos to emerge from our core after enormous struggles. And, on the other hand, let us not forget that the drama of Jesus of Nazareth was planned since before the Earth existed as a planet, and already since then the divine hierarchies were active to make public the drama of the crucifixion or incarnation of the intimate Christ.

Having said all the above, I hasten to give you some sentences that are a source of eternal wisdom:

“The greatest number of evils that man suffers from comes from man himself.”
Pliny the Elder

“The evil which does me no harm is like the good that in no wise avails me.”
Leonardo da Vinci

“There are few wicked people who already in life do not carry hell in their souls.”
Bembo

“The wicked obey their passions like slaves obey their masters.”
Diogenes

Poster “Ode to the glorious Samael”