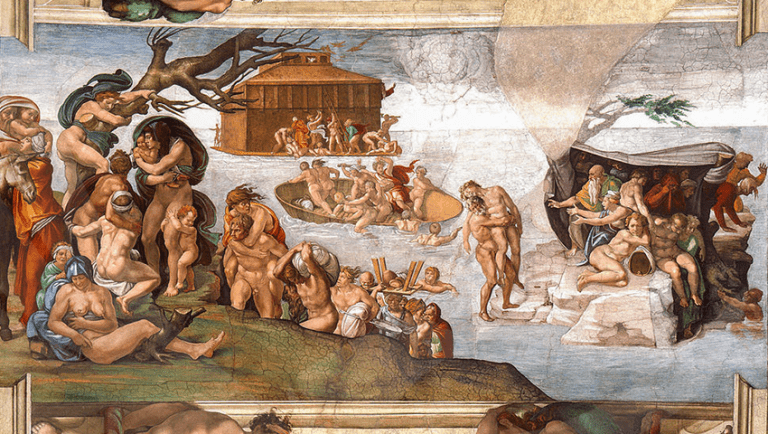 I am very pleased to send you some comments about the central part of the pictorial work of the great Initiate Miguel Ángel Buonarroti and which is entitled:

This monumental work attributed to this great artist, architect and sculptor, has become the magnum opus of all those made by enlightened painters. It shows details narrated in the Old and New Testaments of the Holy Scriptures, that is, of the Christian Bible.

First of all, we must observe that this panel is guarded by four large figures that appear naked and always showing us aspects of their physiognomy such as their back, their spine, etc. However, the fact of seeing them naked invites us to reflect, because it is a matter of pointing out the animic nudity and the need, therefore, to create our sacred vestments ─namely: the animic vehicles─…

In the center of this painting we can contemplate three aspects, namely:

It is necessary to tell all of you that the universal flood, which is spoken of in practically all theogonies of all latitudes of our world, has a double aspect, just like the Apocalypse or Book of Revelation. According to this, we are being told: either we are saved by the transmutation of our alchemical waters or we will be exterminated as the Atlanteans were by the action of the aquatic element.

Let us begin our comments by pointing out that the people who approach the dry tree doing a kind of mini-pilgrimage, are all those souls who, having been fornicating for millennia, in the end resolve to approach the dry tree –that is, the alchemical teachings– seeking to be rescued. In this regard, the great Adept Fulcanelli tells us the following in his THE DWELLINGS OF THE PHILOSOPHERS:

The dried up tree is a symbol of the common metals [the creative energy] reduced from their ores and molten, which the high temperatures [lustful] of metallurgical ovens have caused all the activity they possessed [faculties, forces, capacities, etc.] in their natural mineral bed to be lost. This is why the philosophers qualify them as dead and recognize them as being improper to the labor of the Work until they have been revivified or reincrudated [namely: re-nourished], to use the expression hallowed by usage, by this inner fire, which never completely leaves them [because the creative energy is always available to whoever wishes to use it]. For the metals, fixed in the industrial form we know them to have, yet preserve at the very depth of their substance, the soul that common fire has caused to cave in and condense but was not able to destroy. And this soul the sages have named fire or sulphur because it is truly the agent of all the mutations, of all the accidents observed in metallic matter, and the incombustible seed [sexual] that nothing can totally ruin, neither the violence of strong acids, nor the fire of the furnaces. This great principle of immortality charged by God Himself to ensure and maintain the perpetuity of the species and to reform the perishable body, subsists and can be found even in the ashes of calcined metals when the latter undergo the disaggregation of their parts and see the consumption of their bodily envelopes.

Therefore, the philosophers deemed, not without reason, that the refractory qualities of the sulphur and its resistance to fire could only belong to fire itself or to some spirit of an igneous nature. This is what led them to give it the name under which it is designated and which certain artists believe to come from its appearance, although it bears no relation whatsoever to common sulphur. […]  Well, as for the philosophical sulphur, considered the god and animating force of the Great Work, it reveals by its actions a formative energy comparable to that of the divine Spirit. So, and although we should yet attribute precedence to mercury ─in order to remain in the sequence of the successive acquisitions─, we must acknowledge that it is to sulphur, the incomprehensible soul of metals, that our practice owes its mysterious and somehow supernatural nature [this is referring to the Sacred Fire of Stella Maris].

Therefore, look for sulphur in the dead trunk of common metals and you will obtain, at the same time, the natural and metallic fire which is the main key of the alchemical labor. “Therein lies” ─says Limojon de Saint-Didier─ “the great mystery of the art since all the others depend upon the intelligence of this one. I would be satisfied” ─adds the author─ “if I were allowed to unequivocally explain this secret to you, but I cannot do that which no philosopher believed that he was allowed to do [the Great Arcanum had not been unveiled]. All that you can reasonably expect from me is to tell you that the natural fire is a potential fire which does not burn the hands but renders its efficiency whenever it becomes excited by an external fire [of Sexual Magic]”.

As for Noah’s Ark that we see in the background of the painting, it is well worth observing that it alludes to the PHILOSOPHER’S STONE itself. Let us remember that, alchemically, the Philosopher’s Stone actually consists of nine sides, as it would be constituted by a cubic stone with a pyramidal termination; these would be the nine sides of it. In this ark or stone you can see people who are working on it and, at the same time, helping others who want to be rescued by the magisterium. Let us see there that ladder that one of those people is manipulating. That is Jacob’s ladder, the same one that also represents the levels of the BEING and the alchemical rungs.

We cannot leave aside the phonetic Kabbalah to tell you that ARCA DE NOÉ [NOAH’S ARK] is a play on words that must be translated as “ARCANO ES” –the means of salvation–.

It is also interesting to see the dove of the Holy Spirit AT THE TOP OF THE ARK, because, certainly, it is the Holy Spirit who guides the works that are to help the souls who work in the transmutatory art.

In this Ark there are naked people –without their animic garments – and a few who do wear clothes. The latter are the Adepts who try to help humanity at all times.

Finally, we can see a group of people or souls placed within a kind of container heading toward the ark. These are those souls who, having already known the Arcanum A.Z.F., are going to take refuge in the mysteries of the ark.

On one side, we said, we see a small group of souls who, thanks to the fact of having understood the mystery of the hard rock –sex–, have also managed to survive the unleashed raging waters. There we see approaching people who have almost fainted, who are helped by others to be able to reach the symbolic islet.

Interestingly, on this islet we can contemplate another tree that is beginning to green, a living allusion to the fact of reincruding its Secret Mercury.

Detail of the ARK of salvation:

I add now, dear readers, a few sentences to be reflected upon, let us see:

“Conscience is the voice of the soul; the passions of the body. Conscience has more than a thousand tongues.”
Shakespeare

“We can deceive men, but not our Consciousness.”
Cristina from Sweden

“That is the whole secret of a peaceful conscience, that it is in agreement with the heart.”
Benavente

“Consciousness is a glimpse of the purity of man’s primitive state.”
Bacon