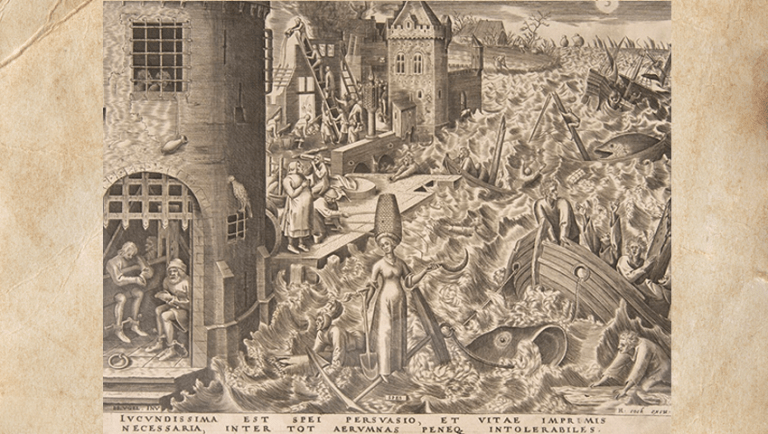 I send you, on this occasion, an engraving that is attributed to a painter named Pieter Brueghel de Oude, called the Elder. This painter lived between the years 1526 and 1569.

The biography of Pieter Brueghel, the Elder, has gaps due to the absence of written sources. Historians are often reduced to formulating hypotheses.

In general, what is said about him is the following:

“Pieter Brueghel was a Brabanz painter and engraver –the Duchy of Brabant was a former duchy located between the Netherlands and Belgium–. Founder of the Brueghel dynasty of painters, he is considered the most important Dutch painter of the sixteenth century. With Jan Van Eyck, Bosch and Peter Paul Rubens, he is regarded as one of the four great masters of Flemish painting.”

The engraving we present is called SPES. Translated from Latin it would be…

Let’s start by saying that hope – SPES – is written under the feet of the main figure, who is depicted as a woman with a sickle in her left hand, a shovel in her right, a tower on her head and her feet on an anchor. She is found in the middle of a scene of terrible adversity: characters who struggle to escape the waves of the sea, destroyed ships, other characters who try to put out a fire that burns a house, others who look for food by fishing in the sea, others suffer detention in a tower or prison…

The translation of that sentence would be: ‘The persuasion of hope is very pleasant and especially necessary for life, in the midst of so many almost unbearable hardships’.

The interesting thing about this engraving is that it shows us the gymnasium of the adversities that humanity receives in its horizontal life. Therefore, practically all we see are problems and situations of misfortune. There we see people who are in prison, others who dedicate themselves to putting out the fire of a house, others who try not to drown in the middle of the storms of life, etc., etc., etc.

It is very curious to see a woman –the hope– standing on an anchor and carrying in her left hand a sickle and in her right hand a shovel.  What does all this mean?

Here, dear readers, is indicated to us the need to DIE TO ALL THAT IS ILLUSORY AND EARTHLY –the meaning of the sickle– and to begin to dig a new life –the shovel–.

Undoubtedly, in order to begin to DIE IN OURSELVES it is indispensable to resort to the profound self-observation of ourselves, which is symbolized by the turret or tower that the aforementioned lady carries on her head. That tower was, in many engravings, the symbol of self-observation because from it we can have a general perspective of how we are psychologically. Without an integral self-observation it is impossible to discover our weaknesses in order to exterminate them.

It is also good to point out that in this work hope is shown in a feminine form, because all our hopes are and will always be for the help that our Divine Lady: DEVI-KUNDALINI, can offer us.

The significant fact that the Divine Lady is standing on an anchor allows us to understand that She is the only one who can give us stability in the midst of any adversity. That is why in her we have all our hopes…

On the other hand, it is good to remember that the form of the anchor encloses, in itself, the three primary forces of creation: Holy Affirmation, Holy Negation and Holy Conciliation.

The farmers that we see in the background of this engraving represent those who, while already working their Philosophical Earth ─namely: their body and their soul─ will not be affected by the constant deluge of adversities that horizontal life possesses.

Having said all the above, I now hasten to give you these very timely sentences to be reflected upon:

“What is interesting is not a fact per se, but its explanation.”
Bernard Shaw

“There is absolutely no recourse when intelligence is lacking.”
Saint Teresa

“No man has ever become great without a touch of divine inspiration.”
Cicero

“Learning without thinking is wasted time, thinking without learning is dangerous.”
Confucius

“Inspiration and genius are almost the same thing.”
Victor Hugo