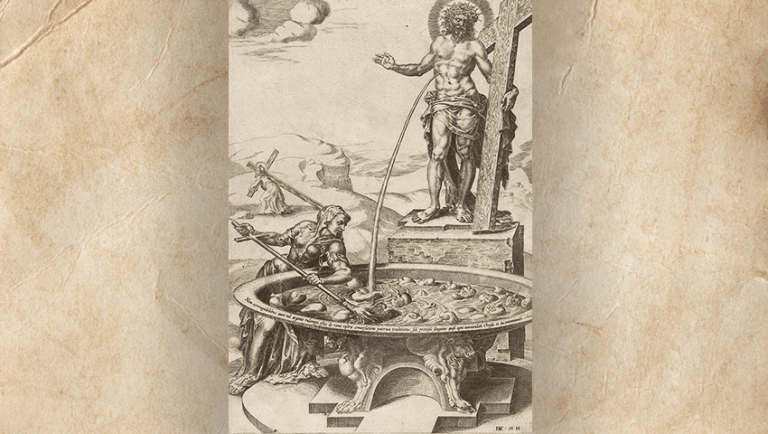 I take the liberty of writing to you to send you some comments on this engraving made by Dirck Volckertszoon Coornhert between the years 1557 and 1561.

This engraving was baptized as…

…THE PURIFICATION OF SOULS THROUGH THE BLOOD OF CHRIST

To begin our study we have to say that, on a base in the form of a cross and legs with the image of the four elements of nature, we see a huge vessel in which hearts float, some with animal-like figures and others already purified, while the God Mother is making them turn and makes the blood of the Redeemer fall on them. Interesting is the cross-shaped instrument of the Divine Mother.

Approximate translation: ‘You have not been redeemed from your vain conduct of the tradition of your fathers with corruptible gold or silver, but with the precious blood of the Lamb of Christ, immaculate and uncontaminated’.

We must point out that the great vessel in which hearts float represents the human race in general, and therefore there are among them hearts that are deformed, corrupt, etc., and also hearts that are preserved and have a normal shape. To many theologians, philosophers, alchemists, etc., the heart was the representation of the virtues or vices of the human species. To the ancient Egyptians, the heart was the one that determined the quality of life that a person had led during his existence, and therefore they represented in their hieroglyphs the famous mural in which the ceremony called the weighing of the heart on the scale of justice is seen. Obviously, this happened in the region of the dead once the person had passed away.

Likewise, that vessel or large container that rests on the animal-like figures representative of the four elements, shows us Nature itself of which we are a part.

Since the mission of the existence of the human being is none other than to redeem himself until he is purified by the Christic or solar forces, that is why the blood of the inner Redeemer or intimate Christus flows, precisely to wash away our faults by eliminating our psychological aggregates with the help of the genesic waters managed by the Divine Lady or God Mother within each one of us.

Therefore, we see Devi-Kundalini in the work of stirring the waters of life, because it is She who whitens our waters, that is, our Philosopical Mercury, a task she shares with the Lord of Perfections or intimate Chrestos. It is written, according to the Gnosis of all times, that we can only be redeemed or purified with the help of the inner Lord. This is what would enable us to achieve, esoterically speaking, the perfection of our alchemical works as we seek to accomplish the inner Great Work.

Interesting is the instrument with which the Divine Mother stirs the waters, because it is a kind of sword that has endings similar to the instruments made for cleaning. The ending of this sword has the shape of a cross, a vivid allusion to the destructive and creative power of the lingam-yoni.

The legs of that great vessel have the shapes of the four animals of Alchemy, namely:

These elements are the basis of Nature itself, that is, of creation. It is also important to indicate that the Chrestos is standing on a cubic Stone, because the Philosopher’s Stone and the intimate Christ are, basically, one and the same.

In the background of this engraving you can see a pilgrim who has taken the cross upon his shoulders to try, by means of the Dry Path of Alchemy, to achieve his Self-Realization or liberation.

Some information about the artist:

Coornhert was also famous as a theologian. At the age of 30, having been interested in theology and eager to consult Saint Augustine, he began the study of Latin. He entered into controversy with Catholics and Reformers, with whom he refused to communicate. He said that, sadly, reformers were needed, but those who called themselves as such were not the kind the church required, what was needed were apostles inspired directly from heaven.”

I give you now, dear readers, some sentences that are well worth reflecting upon:

“The left hand of progress is called strength, the right hand is called spirit. Progress is the great mysterious thread of the human labyrinth.”
Victor Hugo

“To progress is to march toward perfection.”
Balmes

“Man advances only through sacrifice; whenever there is progress it can be assured that there is a martyr.”
Concepción Arenal

“You should only be fond of what happens to you and which is destined by providence, for what could be more opportune for you?”
Marcus Aurelius

“Profound is, by definition, what is far from knowledge. Superficial is what conforms to quick and easy knowledge. The darkness is profound, says the eye. Profound is the silence, says the ear. What is not, is profoundly what it is.”
Paul Valery

Leave a Reply Cancel Reply
You might also like
one of the following
Why do our teachings belong to hermeticism?
The garments of the soul
Significant warnings about the proliferation of false science
Books