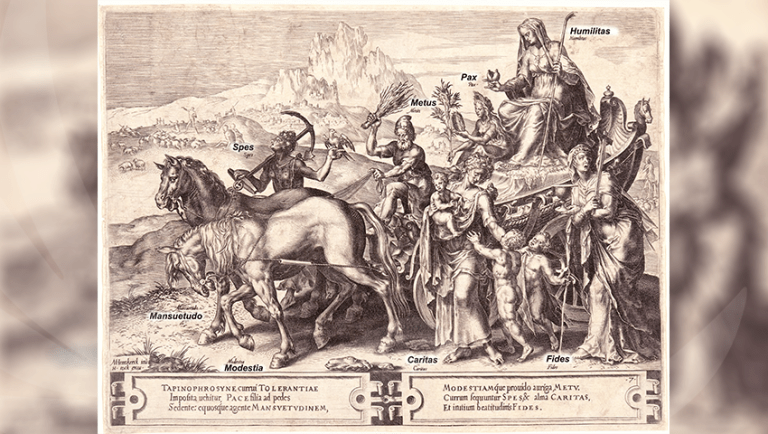 With immense joy I send you, on this occasion, an engraving attributed to a Dutch painter named Jacobszon Heemskerk. The title of this artistic work is…

…THE TRIUMPH OF HUMILITY

First of all, let me show you a brief historical review of this painter:

He was a Dutch portraitist and religious painter who spent most of his career in Haarlem, a city in the Netherlands. He lived in Italy between 1532 and 1536.

Heemskerck was highly respected during his lifetime and was a great influence on the painters of Haarlem in particular. He is known –along with his teacher Jan van Scorel– for his introduction of Italian art in the north of the Netherlands, especially for his series on the wonders of the world, which subsequently spread as engravings.”

Names of the characters that make up the engraving:

The engraving is accompanied by a Latin phrase, let us see:

Translation of the Latin phrase:

‘The carriage of Humility, Tolerance mounted, daughter of Peace who is seated at her feet: and her horses, Meekness, MODESTY, which Fear, as a coachman, foresees. Hope and Charity driving the car, and the principle of happiness is Faith.’

On the other hand, Tapinophrosyne, which is used to name Humility, comes from the Greek tapinos and phronin [phronein], which means ‘to have humble thoughts’.

Many times, studying our doctrine, we are told, in reference to the inner psychological work, about the interaction of virtues in our spiritual development. We must know that, just as the virtues correspond to each other, so too do our demonic defects combine to provoke the so-called resistance to our longings to improve ourselves. It is the struggle of the antitheses to try to achieve dominion over of our body and our animic core.

That is why this engraving indicates for us the virtue of Humility, sitting in the carriage of triumph, carrying with it a pomegranate –fruit of many grains– to indicate to us that this virtue is fruitful. She carries the staff of truth.

At the feet of Humility we see another virtue that comes to be what we call Peace. This Peace carries two very important things in her hands: in her right hand we see a laurel branch and in her left hand a crown made of an olive branch. Both the laurel branch and the crown of olive leaves are representative of material or spiritual triumphs. Where peace bears fruit, triumphs always grow. Remember that in the Rome of the Caesars it was customary to crown the Caesars with a crown made of laurels or olive branches. We must also remember Noah, his boat and his people, who, after sailing in the middle of the oceans, finally let a dove fly and it returned carrying an olive branch in its beak, meaning that they had reached a safe place, that is, new lands.

The carriage is driven by a coachman wearing the Phrygian cap. This cap is widely used in Masonic rites to indicate prudence, which here is indicated as Metus. This coachman makes the horses of the carriage run with a kind of bouquet and not with a whip, because to be prudent we need to measure our strength in order not to make mistakes.

On the left side of the triumphal carriage we can see a woman indicating Charity. That is why she is generous and charitable to souls –represented by children– and attends to their needs. It is good to remember that the Secret Path accelerates or stagnates depending on our mercy or charity toward our fellow men.

One of those infants, who is close to Charity, carries a flowering rod to make us see that, when we work correctly on ourselves, the rod of our spine blooms with the Fires of the Spirit.

Next to the children we see another woman who indicates the virtue of Faith ─Fides─. She carries in her hands a chalice and a crucifix. The chalice points to, indicates, the cup or gomor of the sexual tantric mysteries with which we are to fulfill; the crucifix shows the connoisseurs of Alchemy, the Dry Path or Direct Path that leads to the incarnation of the intimate Christ.

Next to one of the horses that pull the cart we can observe another lady who carries an anchor on her shoulders. The anchor was often used as a symbol of the incarnation of the three primary forces of creation, and this instrument also indicates that, in due course, our work will be finished and we will have managed to self-realize. The anchor, with its three endings, ends up symbolizing the Father, the Son and the Holy Spirit. The Latin word that accompanies the figure of the woman who carries the anchor is Spes, ‘Hope’, because the man or woman Initiated in the mysteries must always work with the strength of hope… In the other of her hands, this woman carries a dove that reminds us of the Holy Spirit and his divine grace. The Holy Spirit is the great reconciler between us and our Real BEING.

To finish, let us observe the two horses. One is called Modesty and the other Meekness. What does this mean, esteemed reader?

ANSWER: We cannot set our true work in motion if we do not, above all, separate vanity and conceit from our life. These abominable characteristics will lead us, sooner or later, to become Hanasmussen or abortions of the Divine Mother. Let us remember the words of the V.M. Aberamentho: “Blessed are the meek, for they shall inherit the earth.”.… Modesty is the enemy of pride, and our Real BEING will never help us if we are full of vanity and pride. In his posthumous work, the Pistis Sophia Unveiled, our most sacred Patriarch V.M. Samael Aun Weor emphasizes for us the urgent need to be plain, modest, simple and NOT VAIN if we want divine help in our pilgrimage.

See, then, kind readers, how in a simple engraving of the Middle Ages we have been shown all the work we have to do on ourselves to abandon our humanoid state and become Solar Men and Solar Women. Up to here are my words.

I now add a few sentences for you to reflect upon:

“Faith consists in accepting the affirmations of the soul and the absence of faith in denying them.”
Emerson

“No man is wise who holds not the faith.”
Tertullian

“The higher we are, the more we must descend toward our fellow men.”
Cicero

“Charity is not the patrimony of a school, of a religion or of a particular people: it is a profoundly human virtue.”
Jose Zorrilla