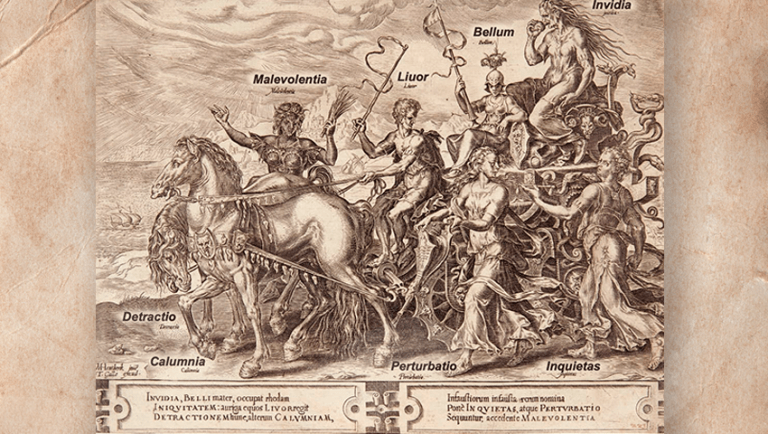 …The carriage of envy

First of all let me inform you that this work was made by Marten van Heemskerch between the years 1498 and 1574. It is an engraving alluding to the cardinal sin of ENVY, which is certainly one of the most pernicious scourges we have created with the animal Ego.

This phrase, translated, reveals to us the following: ‘ENVY, mother of WAR, seizes the carriage with EVIL. The coachman of said carriage, controls the defamation [the horse named Defamation], and, likewise, the other [horse] the SLANDER, unjust accusations to provoke DISTURBANCE and PERTURBATION, all this accompanied by MALEVOLENCE’.

The aggregate of ENVY is shown as an old witch with snake hair, sitting on a throne, devouring a heart. With this we are shown that, indeed, envy eats away at our hearts and makes us feel very bad feelings toward our fellow men. The snakes she wears as hair point out the bad influences she provokes on our psyche.

The character that appears and who is called BELLUM ─’war’─ is at the feet of envy; LIUOR is the coachman, meaning the GRUDGE, which undoubtedly allegorizes our ANIMAL EGO. The MALEVOLENTIA ─’malevolence’─ is here the character who carries what looks like horns and in his hand a type of whip or branches to whip the horses, because envy always likes to be moving fast in our mental nooks and crannies.

DETRACTIO ─’defamation’─ is one of the horses and CALUMNIA ─’slander’─ happens to be the other horse. Both characteristics of envy come to be the consequences that derive from their actions. Envy takes pleasure in creating detractors and PERTURBATIO –that is, ‘perturbations’– which is indicated by a woman who is blowing with a bellows toward the feet of the horse. Thus, in this way, envy accelerates psychological perturbations in our animic continent.

INQUIETAS – the ‘disturbance’ – is represented by another woman who holds in her hand a stick with two weights hanging at its extremities. This is indicating to us that envy causes a lot of bad restlessness and uncertainties that lead us to anguish.

At the rear you can observe, like a decoration of the carriage, a strange ornament that shows a cadaveric face. From such an ornament a snake is coming out. We have been made to see all of this so as to become Conscious that the springs of envy are many and all of them are very tenebrous.

The wheels of the carriage are very striking, which are not very sharp but are seen to have teeth and each tooth is decorated with a demonic or animal-like face. All this indicates the complexity that surrounds the plurality of our inner Beast.

This engraving shows us what we have always emphasized: the “I” is always accompanied by many other elements.

It is good to note that the pectoral of one of the horses –the one mentioned as Slander– has two evil faces chiseled on it with the tongue out, all of which indicates the disorder and ugliness of this defect.

On the other hand, the shield on which the BELLUM character rests also has an evil face that we must interpret as the bad intentions of this aggregate. It is for this reason that the Latin phrase that accompanies this engraving begins by saying “Envy, mother of wars…” Undoubtedly, all the wars of the world are often caused by envy, let us not forget it.

Likewise, the face that we observe on the shield on which the character called BELLUM rests resembles the face of the aged and horrible woman who represents the envy itself.

There are two snakes in the back of the carriage that are somewhat reminiscent of the Caduceus of Mercury, but near them is a third snake. In this case we are told that envy operates the EVIL WAY OF THINKING and the UNDESIRABLE WAY OF FEELING with ILL WILL.

I add now a few sentences for reflection:

“Envy harms the envious himself.”
Voltaire

“Envy fires its shots to the biggest things.”
Ovid

“Envy is a thousand times more terrible than hunger, because it is spiritual hunger.”
Unamuno

“Envy is the rodent worm of merit and glory.”
Bacon

“Envy is only the vice of man, of which the brute animals do not participate.”
Plutarch