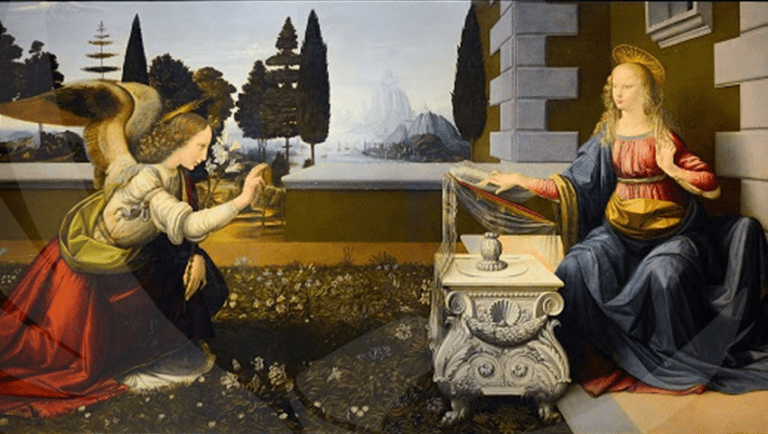 I communicate with you to send you this magnificent pictorial work by Master Leonardo da Vinci, entitled…

This world-famous work of art is quite an esoteric jewel for the content it encloses. In it we see the Virgin seated and in front of her a white marble table on which rests a shiny veil that falls on an open book. The Virgin touches the book with her right hand.

The book, in Alchemy, dear readers, represents the Mercury of the Secret Philosophy, and She, Stella Maris, representative of the Divine Fire, when touching it She fecundates it and that is where the gestation of the Adorable One and of every Master of the White Fraternity begins.

The motif of the book is very representative in transmutatory art, and I consider it very important to add a few words here by the V.M. Fulcanelli, let’s see:

“… finally, a second angel, showing the open book, the hieroglyph of the matter of the Work, prepared and liable to manifest the spirit it contains. The sages have called their matter Liber, the book, because its texture, crystalline and lamellated, is formed of superimposed leaves, like the pages of a book. […]

This book, although quite common, and even though everyone can easily acquire it, cannot be opened, that is, comprehended, without previous revelation. God alone, through the intercession of “Monsieur St James“ [The Patron of the Great Work according to Gnosis], grants, only to those whom he deems worthy, the essential enlightenment. It is the Book of Revelation, whose pages are closed with seven seals, the initiatory book presented to us by the characters in charge of exposing the higher truths of science. […]

At the end of this artifice, the book, opened, shows its engraved bark leaves. It then appears, to the eyes’ astonishment and the soul’s joy, covered with admirable signs which manifest its constitutional change… [Understand here that Mercury has changed its constitution thanks to the good offices of the fire of Devi-Kundalini.] […]

We have often had the opportunity to explain the meaning of the open book characterized by the radical solution of the metallic body [namely: Mercury, the genesiacal waters], which, having left its impurities behind and yielded its sulphur, is then said to be open. But we have to make another remark. Under the name Liber and under the image of book, adopted to qualify the matter, withholder of the solvent, the sages meant to designate the closed book, the general symbol for all crude mineral or metallic bodies, such as given to us by Nature or such as human industry delivers to the market.”

─Excerpts from the work THE DWELLINGS OF THE PHILOSOPHERS, by V.M. Fulcanelli─.

This book of which we speak rests on a lectern and, likewise, we see a very sacred veil that wraps the open book and in a certain way also the lectern. All this is to imply that the truths contained in that book are very high and need to be veiled from the eyes of the profane.

On the other hand, we will say that the Virgin is dressed in absolutely alchemical clothes because of the colors She is wearing. First, we see the intense blue that in Alchemy supplants the color black, then we see the yellow color and finally the red color appears before us, symbol of Mercury united to the Sulfur of the sages.

Let us remember that She, the Virgin, is the same Stella Maris, the Virgin of the Sea of the philosophers or Masters of transmutatory art. Likewise, we cannot forget that it is She, Devi-Kundalini, who receives the Christ child in her womb to nourish Him with the Philosopher’s Magnesium –Mercury itself–.

The Virgin carries a halo on her head, not only because she is immaculate or holy, but because she is certainly Virgin before childbirth, during pregnancy and after childbirth, because her work is linked to the heights and that is why she is always immaculate, that is, without blemish, stain or sin …

“It is known that [this painting] is one of the first commissions to Leonardo, a work of youth of the artist while he was in the workshop of master Andrea del Verrocchio. […]

[The painting] depicts the theme of the Annunciation of Christ’s coming to Mary announced by the Angel Gabriel, according to the Christian Bible, being recorded in the Gospel of Luke, 1:26-38:

In the sixth month, the angel Gabriel was sent by God to a city in Galilee called Nazareth, to a virgin betrothed to a man named Joseph, from the house of David; and the virgin’s name was Mary. Entering the angel to where she was, he said: Hail, very favored one! The Lord is with you; Blessed are you among all women. But she, when she saw him, was troubled by his words, and considered what manner of greeting this was. Then the angel said to her: Mary, do not be afraid, for you have found favor with God. And behold you will conceive in your womb and bring forth a son, and shall call his name Jesus. He will be great, and he will be called the Son of the Highest. The Lord God will give him the throne of his Father David; He will reign over the house of Jacob forever and of his Kingdom there will be no end. Then Mary said to the angel: How can this be, since I do not know a man? The angel answered, and said to her: The Holy Spirit will come upon you and the power of the Highest will overshadow you; therefore also that Holy One who is to be born will be called the Son of God. Now indeed Elizabeth your relative has also conceived a son in her old age; and this is now the sixth month for her who was called barren, for with God nothing will be impossible. Then Mary said: Behold the maidservant of the Lord; let it be to me according to your word. And the angel departed from her.”

Notice that the angel has his wings flapping and holds a white lily – lilium candidum – symbol of purity according to theologians. Through Gnosis, today we know that this flowering branch or white lily symbolizes the very spine that has borne its expected fruits thanks to the use of the Great Arcanum. The Angel Gabriel wears garments representative of the two types of sulfur that every alchemist has to achieve: first the incipient Sulfur beginning to bear fruit, called Green Lion, and later the Sulfur fully integrated with mercury, called Red Lion.

Also, note that the Angel Gabriel appears greeting the Virgin Ram-IO or Mary raising his thumb, index and middle fingers, symbolizing in this way that the forces of the Father, the Son and the Holy Spirit greet Her and are with Her.

Likewise, we must observe that the Virgin of this honorable painting or canvas is touching with her right hand an open book. The open book represents Mercury exalted because of the union with the divine Sulfur, the fire of Stella Maris. Likewise, take into account that the Virgin is in this work beginning her pregnancy and a part of her womb is wrapped with a golden cloth because of what is gestating in her womb.

The composition of the painting uses a rigorous perspective called a vanishing point, which leads the gaze to a distant rocky mountain. Obviously, such a mountain represents the High Initiation, the search for the Intimate Christ, while the harbor city with its ships refers to worldly life or horizontal life.

I send you, for the good of all, some details of this most holy pictorial representation to realize, once again, that Leonardo da Vinci was closely related to the Ars Magna. He was quite a Venerable Master of the Great White Fraternity.

I now give you some valuable phrases to be reflected upon:

“To write about women you have to dip your pen in the rainbow and use butterfly wing powder as a dryer.”
Diderot

“Every woman is a flower with a soul.”
Campoamor

“Women are more mistreated by civilization than by nature.”
Rousseau

“The wise woman builds her house, but the foolish woman with her hands tears it down.”
Biblical Proverb