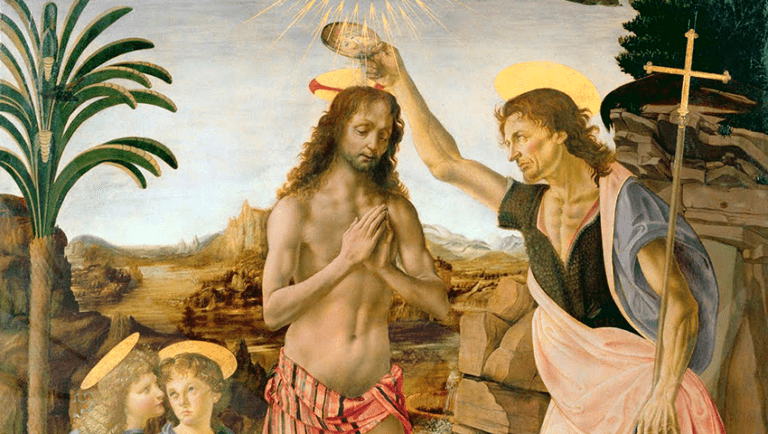 I take a part of my time to delve into the interpretation of this masterpiece by the V.M. Leonardo da Vinci. In this case we will deal with the…

Certainly, baptizing the redeemer of the world could not be a liturgical work carried out by just any Master, someone of a great spiritual stature was needed, and no one better than the Baptist himself, who is still established in the etheric world as the regent of it and, therefore, he is the rector of Elemental Paradises.

When we look at this transcendental work, what appears at the top are the hands of the blessed Pantocrator or Theomegalogos.

From these hands emerges a beautiful white dove with igneous radiations, which symbolizes the Holy Spirit himself, the reconciler of the positive and negative, active and passive forces, the HOLY NEGATION and the HOLY AFFIRMATION.

Some scholars of the trajectory of the V.M. Leonardo comment that this work was carried out, not only by Leonardo da Vinci, but also by another painter named Andrea del Verrocchio, whom many cite as Leonardo’s Master. Some even go so far as to say that, at this time, Leonardo da Vinci was a simple apprentice, but there are those who believe that Verrocchio himself was displeased when he saw that the apprentice –Leonardo– surpassed him by far.

Our Patriarch, the V.M. Samael Aun Weor, states forcefully that when Jesus was baptized in the Jordan River a white dove fluttered over the head of the V.M. Aberamentho, symbolizing with this that the grace of the Holy Spirit remained as a part of the Great Kabir during his terrible initiatory passion and after living it.

You can easily see the Jordan that runs from the background, and the feet of the exalted Aberamentho are introduced into it.

In the central image we see the ineffable CHRESTOS receiving from John the Baptist the mercurial waters. For that John the Baptist uses a kind of golden “saucer” in which a figure seems to be reflected that makes us think of the pheasant of Alchemy, widely used in the transmutatory art to symbolize the four colors of Mercury itself. The pheasant itself allegorizes, in Gnostic symbology, the Christic forces. Next to Jesus of Nazareth we see two angels that we must identify as Michael and Gabriel, and one of them holds the clothes of the one who is being baptized. Interestingly, some scholars claim that these two angels are looking at a couple of birds, one to the right and one to the left of the most sacred Aberamentho. These two birds along with the dove are representative of the three primary forces of creation.

The blessed John the Baptist has a cross on which a kind of parchment is rolled up with the caption ECCE AGNIUS, which is to be translated as ‘behold the Lamb of God’…….

Note that the environment of the two main characters: Jesus and the Baptist, is totally made of stone, because sexuality is the stone stumbling block and rock of offence, as we already know.

To the right of the V.M. Aberamentho we see a palm tree, which in the mysteries symbolizes the very spine. On his left a pine can be seen, representative of the tree that allegorizes the BEING, our Kabbalistic Kether.

Notice below the two angels –Michael and Gabriel– accompanying the V.M. Aberamentho at that most sacred moment of his baptism.

Detail with the angels and the landscape.

Detail of the baptism plate.

Having made this unveiling, friends, I now add a few sentences to be reflected and meditated upon:

“There is always a providence that inspires us to alleviate the most pressing needs of our fellow beings.”
Goethe

“Providence likes to be tempted. That is the secret of the man who triumphs.”
Bernard Shaw

“When God’s favor is lacking, diligences are excused.”
Saint Teresa of Jesus

“Prudence is knowing how to distinguish the things that can be desired from those that should be avoided.”
Marcus Tullius Cicero

Share
Tweet
Leave a Reply Cancel Reply
You might also like
one of the following
The garments of the soul
Significant warnings about the proliferation of false science
Where does light come from?
Books