VOPUS Gnosis > Articles > How far can our degree of mystical death go? 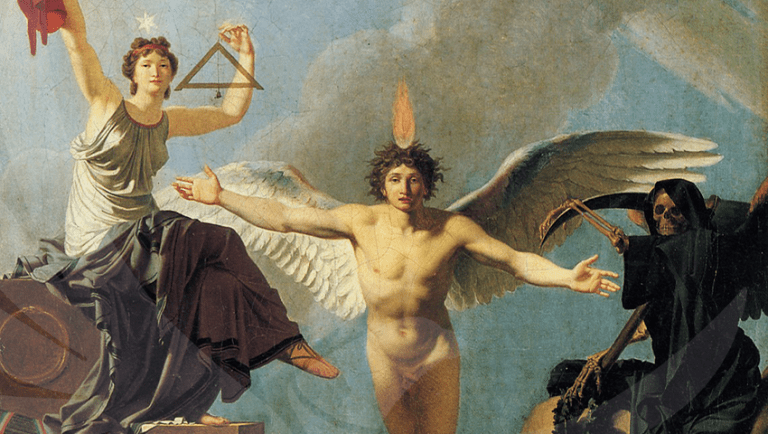 I intend to send you some reflections to try to clarify:

HOW FAR CAN OUR DEGREE OF MYSTICAL DEATH GO EVEN WHILE BEING SELF-REALIZED?

When we come to know these sacred teachings, a vast panorama opens up before us, related to a WORK consisting of trying to BECOME OWNERS OF OURSELVES, TO ATTAIN OUR TRUE INDIVIDUALITY and TO UNITE OURSELVES WITH THE BEING. All this is presented to us with the parameters of the so-called THREE FACTORS OF THE REVOLUTION OF CONSCIOUSNESS that we have already commented on many times. However, I have always insisted, for many years, in the congresses, meetings and gatherings that we have celebrated INTERNATIONALLY, that what is fundamental in our objective is based on INNER DEATH.

The GREAT KABIR OF GALILEE already said: “If the grain does not die the plant is not born”, and our blessed Guru and Avatar, the V.M. Samael Aun Weor has repeated it over and over again. It is only logical that if we try to build a house without good foundation, it can fall down anytime, causing a lot of destruction and even causing our physical death. The same is true, esteemed reader, with this thing of DYING PSYCHOLOGICALLY. If we do not make sure to eliminate PATIENTLY, with deep acuity, our ten thousand aggregates, we can be assaulted by such monsters anytime and COMPLETELY LOSE ALL OUR WORK.

Normally, we start with a lot of difficulty when trying to SELF-OBSERVE, because the sense of self-observation is atrophied in the rational homunculum, which is very serious. During millennia we have always been living OUTWARDLY without even taking a look INSIDE to try to know our inner world. Fortunately, in the works REVOLUTIONARY PSYCHOLOGY and THE GREAT REBELLION, the V.M. Samael disclosed to us much of the efforts that WERE UP TO US TO MAKE OURSELVES, and yet, unfortunately, our little companions complain that they do not manage to understand themselves….., which is not a pleasant omen.

But if we persevere on our journey, if we become TRUE ENEMIES OF OURSELVES, then we begin to realize the dreadful task ahead. In that case we would say that something is better than nothing, worse is having achieved nothing…

Helping ourselves by means of VOLUNTARY SUFFERINGS and CONSCIOUS SACRIFICES we can accelerate our work, but the problem of all of us is that WE RESIST TO DIE because we want to excuse our monstrosities all the time, this is where the fundamental problem lies!!! This is not endured by the humanoids of the Earth, we prefer to die physically rather than ACCEPTING WHAT WE ARE…

However, on the basis that we would really like to DIE TO THE WORLD AND BE BORN TO THE SPIRIT, then the help of our dear Divine Mother with the tool of the sacred ARCANUM A.Z.F. can fulfill the miracle of the disappearance of the aberrations that belong to the VISIBLE FACE OF OUR ANIMAL EGO. And if the divine hierarchies give us permission to move forward, then we would enter the terrain of the DESERT OF THE WISE, ─namely: THE SECOND INITIATIC MOUNTAIN─.

In addition to all this, dear reader, it is obvious that, as we die psychologically, we will be born thanks to the help of intelligently mixed SULPHURIZED MERCURY. Thus, therefore, we will begin to climb Jacob’s ladder, which is intimately linked to the SEPHIROTIC TREE that Gnosis fortunately reveals to us. However, it is VERY IMPORTANT not to succumb to the VERTIGO of the height, because there have been many, many, many who, having climbed much of the SECOND MOUNTAIN, end up slipping and falling, all of which, to make it worse, translates as TURNING INTO DEMONS… Here I must add a popular proverb that says: Forewarned is forearmed and if the soldier still dies it is due to negligence!!

Assuming now, patient reader, that, finally, we manage to destroy the HIDDEN FACE OF THE “I” because we have successfully completed the first nine Works of Hercules and, also, the EIGHT YEARS RELATED TO THE LEPROSY OF THE PATRIARCH JOB, we could perhaps say: “We HAVE TRIUMPHED! Hallelujah, hallelujah, hallelujah!” However, and without wanting to reduce anyone’s courage, I have to tell you that even when the “I’s” VISIBLE AND INVISIBLE FACE have been eliminated, even when its mother the BEAST has been eliminated, the ANTICHRIST in us, we must never forget that there are always THE RESIDUES OF THE “I”, which are tremendously dangerous, because one of those residues can remain, masked, in our hidden anatomy and make us stumble even if we are self-realized Masters. This is how THE THRONES, THE DOMINATIONS, THE POWERS, THE SERAPHIM, THE CHERUBIM fall…! We must make sure, dear friends, very deeply that OUR DEATH HAS BEEN TOTAL so as not to run the risk of LOSING OUR PHILOSOPHER’S STONE that we have had to work so hard to make with the help of the Most High.

It should be known that GREAT ELDER BROTHERS of the WHITE BROTHERHOOD fell in this KALI-YUGA. Suffice it to simply mention none less and none other than the apostle SAINT JAMES himself. Who would have believed it? Well, it has happened. Let us remember ZANONI, the great Chaldean mage. And we might ask ourselves: why did such luminaries fall? ANSWER: because DEATH was lacking, the residues were not eliminated. These residues only disintegrate with the elimination of the so-called TELEOGHINOORAS TAPES, which disintegrate when the Father, having taken the decision to leave for THE ABSOLUTE ABSTRACT SPACE, makes us previously enter the so-called PURGATORIAL PLANETS and, in that case, then the residues and memory of the Beast are reduced to cosmic dust…

It is clear that, once liberated from SAMSARA, we can continue working for humanity in other solar systems and in other Races. And precisely for that we will be assisted by vehicles of more internal perfections like that of Nirmanakaya, that of Sambhogakaya, the body of Adikaya and even the vehicle of ABSOLUTE LIBERATION which is the DHARMAKAYA. However, we must never forget that we can also be betrayed by the DESIRE TO EXIST and that is precisely what has prevented, according to what the V.M. Samael tells us, the regent of the sun Sirius, the capital of our galaxy, from entering the ABSOLUTE ABSTRACT SPACE. See, then, how there are traps in the world of relativity. Today we can be TITANS FULL OF GLORY and tomorrow, due to negligence, become beggars punished by the karma of the worlds…..

On one occasion I had the SACRED OPPORTUNITY to be carried by the hurricane of the Father, who transported me to the bowels of the planet Mars. There my Real BEING made me enter a VERY BEAUTIFUL CATHEDRAL whose very walls were made of gold. It was the CATHEDRAL OF THE MARTIAN LOGOS, because with his enormous sacrifices as BODHISATTVA OF COMPASSION he had earned it. I entered, therefore, in the most sacred heavenly abode and in one of the chapels of that cathedral architecture I observed in the background A SARCOPHAGUS ENTIRELY MADE OF PURE GOLD. Within that sarcophagus lay the V.M. Samael, who, by the way, was completely made of GOLD; his own body was the continuation of the GOLD OF THE SARCOPHAGUS. Seeing that I was frankly stunned and began to caress the face of our beloved Patriarch. Then memories of those days when we went to the post office together appeared, or when we would talk about various topics, or when we would just laugh…

Needless to say, all those memories made me cry and one of my tears slipped down the Venerable’s cheek and, even more amazing, the golden figure representing Master Samael came alive and rose up half a body to say to me, “None of that, do not cry, do not cry because I am still with all of you!” That impression was so great for your servant that I suddenly returned to my physical body…… And once in this three-dimensional world I continued to cry for a long time… This has been UNFORGETTABLE for my insignificant person, esteemed friends.

Why am I talking to you about these things? Because I was told that the work done by our blessed Patriarch in this last existence has been REALLY PERFECT, that was the reason why I SAW HIM DEAD IN THAT SARCOPHAGUS and COATED WITH THE PHILOSOPHICAL GOLD, that was the secret reason why my REAL BEING wanted to show me all that, simply to make me see what our INNER WORK should be like.

I conclude by telling you that on one occasion, at the venerable Master Samael’s house, I sprung a question on him in a direct way, I said to him:
“Master, when can we consider that we are safe from falling and losing our Mastery if one day we become self-realized?

ANSWER:
“When we’re in the AIN SOPH, brother, when we’re there!!! Understood?”

“Yes, understood,” I replied to the Patriarch…..

Thus, esteemed readers, the path that must lead us to God is very long and painful, BUT WE MUST ARM OURSELVES WITH INFINITE PATIENCE so as not to deviate from our goal and finally achieve MERGING WITH THE ETERNAL…

MAY THE INFINITE FORCES OF THE ETERNAL COMMON COSMIC FATHER FLOOD YOUR SOULS UNTIL THE END OF TIME.