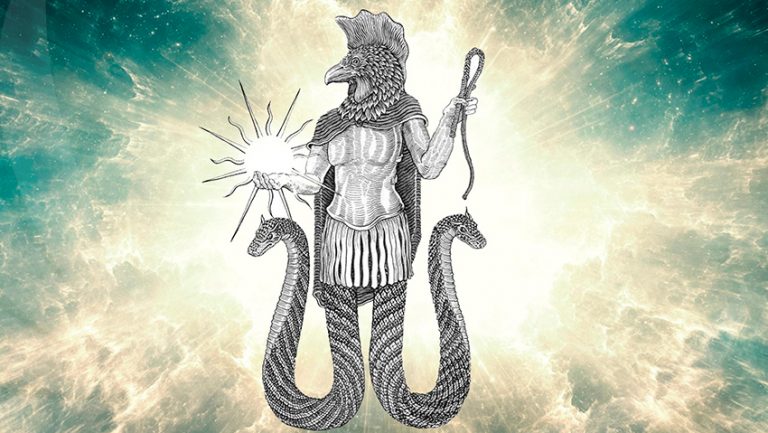 I am sending you these lines to try to unravel, even more, what we would call:

THE GNOSTIC MYSTERY OF ABRAXAS

On another occasion, we have already made a presentation on the principles of this unique archetype that in its appearance certainly covers many mysteries related to the GREAT INNER WORK.

We have to start from the basis that, above all, ABRAXAS is the very sexual energy which exalts or enslaves the human being. It has been FORNICATION that which has led the terrestrial humanoid to lose his will and his longings to be able to get closer to the divine forces, that is, the BEING.

We have also described the elements that make up this very ancient archetypal figure, which was not only present in the Greco-Roman culture but even later, during the Middle Ages and the 18th century, as part of alchemical and occultist studies in general…

Let me again add in these pages some words of the eminent researcher of Gnosticism, Stephan Höeller, about what this exceptional figure carries within himself, let us see:

“I have mentioned that it would be a serious mistake to put Abraxas on the same level as some kind of conventional Gnostic Demiurge. It would be far more correct to say that he is the liberating force by which love and wisdom are able to realize the task of emancipating the human soul from the slavery of the cosmos. Above all, Abraxas is terrible ─namely: explosive─. We believe that this word should not be understood in contemporary vernacular terms, but in the sense of the terribilitá ─namely: revolutionary─ of the Renaissance man, a quality that meant to be feared and admired at the same time and that, according to what was said, was possessed by all those who naturally stood out as exceptional persons.

Abraxas is terrible, his whip is not much different from the knotted rope with which Jesus whipped the money changers in the temple. This quality of the terrible is not the distinctive seal of evil or ignorant arrogance, as one might discover in the case of the Demiurge, but the natural manifestation of the titanic force that inevitably fills the human Consciousness with terror and trembling ─let it be understood: when it is not well understood nor controlled─.”

And the same author adds:

“Modern Christianity and the Western world as a whole have already reached a point of crisis and the options available are not very attractive. We do not want one of those apocalyptic catastrophes that have disfigured our past history, nor the dehumanizing path of the East that would result in an irremediable decline of our principles. Perhaps the only possibility left to us is Abraxas, that is, a projection of our soul both outward and inward, both toward the light and toward the deep shadows of our biological roots, in the hope of finding the pure archetype in the combination of both. This pure archetype would be the image of God who is within us, and who has been too long submerged, like Atlantis, under the waters of our Consciousness. In this way Abraxas would also mean the Total Man…..”

Going now into the symbol that concerns us, we will say that, certainly, Abraxas appears with his rooster’s head to indicate that he is the Nuncio of the Sun, the one who announces the dawn of a new day. Such is the specific quality of our Philosopher’s Mercury.

His trunk is covered with a metallic armor, for he is, in himself, the alchemical metal that, united with fire, makes our silver armor.

In one of his arms he carries the whip of the will, without which he is not manageable and could go on destroying humanity, as it has happened to the present human progeny by becoming a slave of fornication.

The head of the rooster reminds us of the GAIO of the Gnostics, the sacred mantra I.A.O. present in our treatises on Alchemy and in our secret liturgy.

We have already said many times that the shield he carries in his other arm symbolizes prudence, which is very necessary when the devotee wants to walk the path and face the mysteries of the Ninth Sphere.

His serpentine legs in this engraving, besides symbolizing the canals called IDA and PINGALA in Hindustani Tantrism, through which the Mercury ascends victoriously along the spine until settling in at the point between the eyebrows of the Initiate, are forming the sign of the infinite. The latter emphasizes in a decisive way that only through the radiant water, THE MERCURY OF THE WISE, can we aspire to eternity and abandon the wheel of time ─namely: Samsara─.

There are three figures added in this engraving which are very interesting.

The woman kneeling and fearing the fury of Abraxas invites us to know how to choose the right woman for the work in the Forge of the Cyclops. That woman cannot be the Eve-Venus ─the woman who loves fornication─, because she would be our own perdition. Let us also remember that the woman is the gateway to Eden. With the woman we left Eden because of the animal desire and only with the woman can we redeem ourselves in the eyes of the Father through the sacrament of alchemical love.

It is also curious to see that Abraxas sits on the stone of nine sides. Many true Masters of the Ars Magna ─ Alchemy─ have said that the Philosopher’s Stone is a cubic Stone with nine sides, all of which would mean that the blessed Stone has nine faces, corresponding to the authentic STONE OF SPLENDORS which, is crowned with the triangle representing the eternal Triamazikamno ─the three primary forces of Creation─.

We end our description [of the engraving] by showing, to our reader, the special mantra ABRACADABRA, which is divided into syllables here. Abracadabra is the mantra that opens all the doors and in our engraving it is telling us that, through Abraxas, through the Sulfuric Mercury, the doors of heaven and the doors which keep all the mysteries are opened for us…..

Very close to Abraxas and the kneeling woman we can see a skull or cranium. This is the thought of death, the constant reminder made to us to DIE IN OURSELVES, to destroy our animal Ego in order to triumph in the conquest of the Golden Fleece ─the intimate Christ─.

Once again, I would like to add some final remarks that came from Stephan Höeller’s pen:

“The individualization of mankind, on one hand, extends to heaven, where the sublime and Divine Mother receptive to the eternal mind ─Mater Coelestis─ waits to receive us, and on the other hand, it has its roots in the subterranean world of the phallic Eros, the Earthly Father, whose basic force and energy facilitates the necessary force to ascend. The phallus, like a living tree, grows from humid and dark corners of the land of instincts and extends toward the infinite void of space, in the womb of the Mater Coelestis, the ethereal mother enthroned amidst the stars. The semen of the earthly phallus, the sap of the Etz Chiim ─the tree of Life of the Kabbalah─, projected into the womb of the celestial mother fertilizes the cosmic psychological egg, from which the new cosmos of Consciousness is destined to emerge. Thus, as a result of the Eonic game of dance and struggle of the opposites, the final union of heaven and earth is produced, which engenders the androgynous Anthropos, the New Man, the Christ of the Gnostics, who is the paradigm of the transformed and individualized Ego of each individual and of all humanity.”

MAY THE SACRED ENERGIES OF THE BLESSED THEOMEGALOGOS BE WITH YOU ALL.
KWEN KHAN KHU