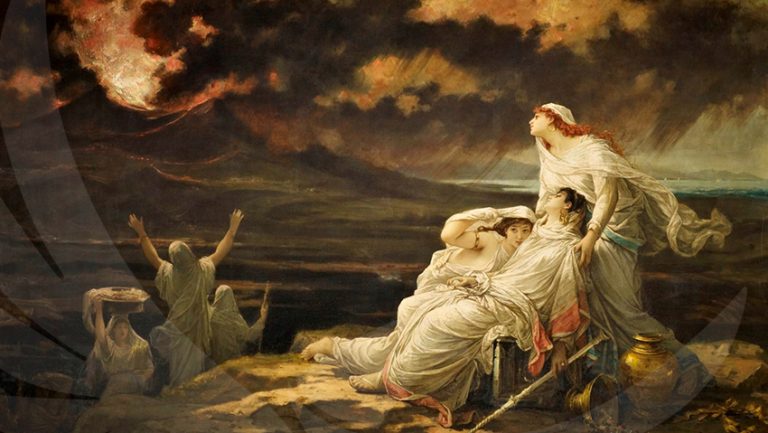 I hasten to send you a text by the V.M. Samael Aun Weor that he wanted to publish in due course, a long time ago, and then it was inserted as a chapter in one of his CHRISTMAS MESSAGES. However, although we may have had knowledge of this text, I consider it important that all of you be aware of the events laying ahead, given the description that Master Samael gives us in this article, originally published with the title:

“Vers.12-17: ‘I looked when He opened the sixth seal, and behold, there was a great earthquake; and the sun became black as sackcloth of hair, and the moon became like blood. And the stars of heaven fell to the earth, as a fig tree drops its late figs when it is shaken by a mighty wind. Then the sky receded as a scroll when it is rolled up, and every mountain and island was moved out of its place. And the kings of the earth, the great men, the rich men, the commanders, the mighty men, every slave and every free man, hid themselves in the caves and in the rocks of the mountains, and said to the mountains and rocks, “Fall on us and hide us from the face of Him who sits on the throne and from the wrath of the Lamb! For the great day of His wrath has come, and who is able to stand?’

And it happened that one day, being outside of the physical body in the state of NIRVIKALPA-SAMADHI, I had to put myself in transcendental mystical contact with the third aspect of MAHA-KUNDALINI ─Proserpina, Hecate, Coatlicue, the blessed GODDESS MOTHER DEATH, terror of love and law─.

Then She took the floor to say:

”All is lost, the evil of the world is so great that it has already reached heaven. Babylon the Great, the mother of all the fornications and abominations of the Earth, will be destroyed and there will be no stone left upon another of all this perverse civilization of vipers.”

After a few minutes of imposing silence, the Adorable One exclaimed:

”Do you want to make a deal with me?”

”Then you open the dead end and I kill them…”

Such were her words…

Now it is obvious that the deal is underway; as we deliver the message for the New Aquarian Age, She eliminates them; the word of the Divine Mother Nature is always fulfilled…

Scientists from Columbia University have publicly reported that there is a gigantic raft in the different oceans, resulting from various telluric activities in recent years. It is at least 90,000 kilometers long, with an average width of forty and an average depth of two and a half.

The rift runs from the Atlantic to the Indian Ocean and from the Antarctic to the Arctic. It borders the American continent as well as the Asian one, leaving the entire Pacific Ocean in the center of the enormous ring of underwater faults.

It is clear and evident that the tremendous underwater rifts mentioned above have their fundamental base in the Antarctic polar cap, near the South Pole, and it is very curious that, precisely there, hot water has been found surrounded by polar ice at many degrees below zero.

That the rift originates in Antarctica and extends very close to Cape Horn is something that has already been duly verified; the bifurcation into two branches is very interesting: one that goes towards the East and another that is lost in the West.

We have been informed in due course that the rift of the Pacific Ocean follows a sinuous path, almost coasting the American continent, passing through Chile, Peru, Ecuador, Nicaragua, El Salvador, Guatemala, Oaxaca and Guerrero ─in Mexico─, the gulf of California, Seattle ─United States─, Vancouver ─in Canada─ and Alaska.

We have been told that in Alaska such rift breaks completely to continue along the famous Aleutian Islands and that a branch runs through all of Alaska, because the earthquakes in Fairbanks, which is in the center of the peninsula, have been very special like the one that occurred in March 1964.

It has been clearly explained to us ─and this is something we appreciate ─that the already proven branch of the Aleutian Islands extends all the way to Tokyo ─Japan─, touching the Sapporo islands ─Hokkaido─, Oahua, Waohua, Kawailora and others.

It has been very clearly pointed out to us that there are two secondary branches which extend from Japan to Hawaii, but the main rift continues towards the Philippines and New Zealand, from where it returns to its original starting point, the mysterious Antarctica, thus closing a terrible and dangerous circle.

We must be absolutely sure that the rift of the Atlantic has its roots in the Norwegian Sea. It should not surprise us in any way that on its route it passes in front of Spain, Portugal and part of Africa. We are very sure that such rift comes to an end near Portuguese Guinea.

The extraordinary rift that heads towards the east of the world is born, as already said, in the mysterious Antarctica and passes in front of the Cape of Good Hope, Madagascar and the Arabian Sea to end in the Indian Ocean.

Any judicious analytical study done on this system of rifts clearly and evidently demonstrates that the greatest danger is found in the Pacific.

The Aleutians form, by themselves, a line approximately on the 50th parallel north. Japan, almost the same parallel as San Francisco, California ─it is curious that serial earthquakes are now developing on this peninsula, damaging Los Angeles and other neighboring towns─.

That there is a relationship between rift and rift is something that should not surprise us in any way; it would not be strange if the enormous rift that now endangers the entire Californian peninsula is closely associated with the entire Pacific fault system.

The sea is the cradle and grave of lands, islands, peninsulas, continents, etc., etc., etc. As strong and stable as all the different geological aspects of this world seem, they can be totally transformed by the underwater fault system.

We do not need to make assumptions: it is urgent to know that from those nine or ten thousand kilometers of underwater faults, in some places on Earth it has already reached the point of bringing the fire from the interior of the Earth in direct contact with the water of the sea…

The igneous element of the interior of the world is, at this moment, in restlessness; pressures and vapors increase from instant to instant… Unusual volcanic activity is intensifying throughout the planet Earth, as pressures and vapors seek the point of least resistance; the Earth trembles, earthquakes will become more and more intense, the most resistant layers will swell until one day they explode…

All the cities and towns of the world will fall like playing card castles made of ashes and a very strange sound will come out from the seabed.

And it is written with words of fire in the Book of the Law that there will be as many dead as the sands of the sea and there will be no remedy. The world has entered a great crisis. The whole Earth will be covered with steam. The planet Earth, little by little, is entering into full volcanic activity; everywhere craters will release deleterious vapors, ashes, fire… The sky will darken preventing the passage of sunlight. The cold will become frightening freezing…

The polar ice, washed away by the terrible rough waters, will navigate towards the equatorial area, cooling the atmosphere, causing decompensations in the air, deadly cyclones that will destroy entire towns, torrential rains, storms, etc., etc., etc. In these circumstances it will be impossible to live. The Aryan race ─that is, our race─ will come to its apocalyptic end.

The Iron Age in which we are wisely coincides with the ELECTROCHEMICAL cycle. Such a cycle began with the Greco-Roman culture and will end in the year 2500. The cataclysms of the end of KALI-YUGA have already begun, the black age ends in the abyss…

MAY PEACE BE WITH ALL OF YOU.”

Let us now reflect, patient reader, on the following sentences:

“The first punishment of the guilty is that he can never be acquitted by the court of his conscience.”
Juvenal

“Whoever spits upwards to the sky will have it fall back on him.”
Juan de Torres

“Work to prevent crimes so as not to need punishment.”
Confucius