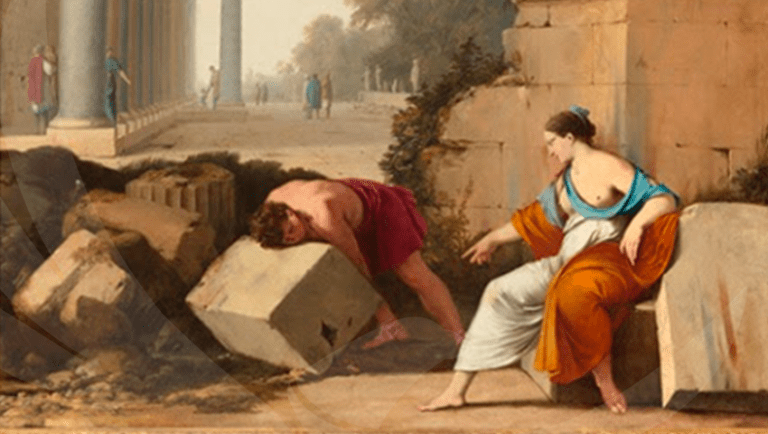 … THESEUS AND HIS PHILOSOPHER’S STONE

They show the Demigod Theseus with his Mother ─Divine Mother─ Etra. These two monumental works were painted in the years 1635-1636 and are right now in the Louvre Abu Dhabi Museum in Dubai. This canvas is attributed to Laurent de La Hire or La Hyre.

In the first of these two paintings we see, first of all, a view of ancient Greece, which we can deduce by contemplating the buildings or the architecture that surrounds the central scene.

In the main scene we can see the mythical Theseus struggling to lift his Stone ─Philosopher’s Stone─, since it has a cubic shape. His Divine Mother is resting on a part of what looks like ruins of which only two columns have remained standing, one of them cut or split. These ruins symbolize the inner temple of Theseus shattered because here it is shown that the Bodhisattva was fallen. Therefore, the Divine Mother of the hero is directing him in the task of collecting his Philosopher’s Stone.

It is good to bear in mind that his Divine Lady, in the first painting, is dressed in garments that do not denote divine royalty,because She herself is the mercurial sulfur that has to mutate until it becomes pure fire. A fire that destroys –the psychological aggregates– and that builds –the inner life of the Initiate–. However, we must note that the main garment of Stella Maris is white, for She is a virgin before, during and after childbirth, that is, She is immaculate…..

We note that the hero of our theme is making a great effort to collect and lift his blessed Stone,because in truth it is not easy to collect the fires and to chisel the aforementioned Stone, a representation of his intimate Christ. It is also important to note that one of the two columns that belong to the ruins of the temple is as if intertwined or semi-enveloped by the branches of a large tree. Such a tree is none other than the tree of life, the tree that represents the Father, the BEING, for our divine Monad never abandons us and is always ready to help us in the task of recovering our eternal values.

In the second part of this monumental pictorial work we now see the hero Theseus dressed in a purple garment, to denote that the Bodhisattva has risen and for this reason he is already in a position to finish his titanic task.

In contrast to the first picture or canvas that we commented before, in this one our attention is drawn to the fact of seeing that the tree that we had previously seen as quasi-dry or dying is now green again, because the alchemical and psychological work of the Bodhisattva has allowed all the parts that make up his philosophical tree, that is to say his Being, to have managed to integrate. Likewise, it is good to emphasize that the trunk of the Kabbalistic tree seems to want to show two of its branches as if they were two merciful hands ready to raise its human Essence or Bodhisattva that represents it in the world of forms.

On one side of the Stone of Splendors we can see the mythological hero and on the other side his Divine Mother pointing with her index finger to the blessed Stone. She, the Divine Mother Kundalini according to the Hindustanis, now appears covered with a blue garment to symbolize the firmament, under which there is another brown garment that allegorizes the Earth or three-dimensional world. The footwear of the Virgin Mother is bluish to indicate that She moves in all dimensions of the universe thanks to her portentous power.

The fact that in both pictorial representations we see the Divine Eternal Feminine with her breasts uncovered is to make us understand that She, our divine feminine seity, is the one who feeds us with her milk or sacred magnesium when we work in thelaboratory of the Third Logos –supra-sexuality–.

It is interesting to see under the stone that we can observe in the second oil painting, some shoes that are a little tattered. This symbolizes THE BAD STEPS of Theseus’ worldly life when he was fallen into disgrace.

It is equally important to see in the first painting a hazy environment while in the second canvas one can see the sun between the clouds, thus indicating that the sun, the BEING, begins to reveal Himself for the repentant soul.

Having finished our unveiling, I am now pleased to leave you with a few sentences for your reflection:

“If we examine ourselves from time to time, the natural result of that examination would be our greater perfection.”
Montaigne

“He who insightfully acknowledges the limitation of his faculties is very close to reaching perfection.”
Goethe

“Men cannot be more perfect than the Sun. The Sun burns with the same light with which it heats. The Sun has spots. The ungrateful speak only of the spots. The grateful ones speak of the light.”
Jose Marti

“Better is the poor who walks in his integrity than one perverse in his ways, though he be rich.”
Biblical Proverb