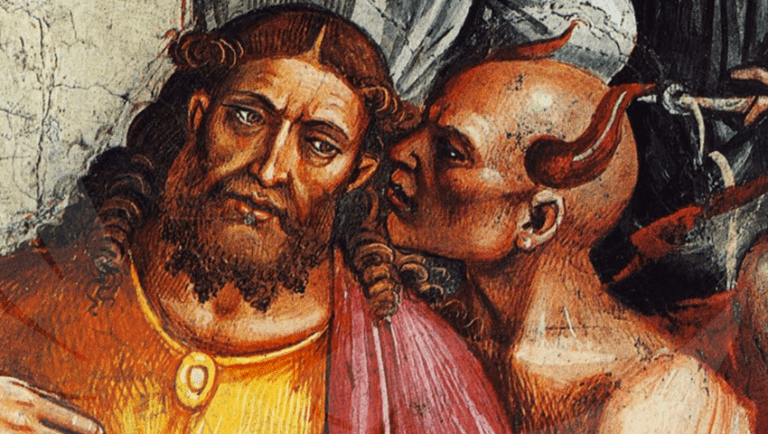 I am writing to send you a doctrinal message about:

THE STRATEGY OF THE  “I” AND OF THE BEAST AGAINST US

In the adventure that leads us, through Gnosis, to the search for the elimination of the pluralized “I” that we carry within and of its mother, the one we call THE BEAST and that we kabbalistically point out with the number 666, it is very important never to underestimate the movements of such evil forces in this hard battle that we face.

The “I” is a sum of yesterdays ─our Patriarch tells us─, a long set of topics of many volumes that, unfortunately, is presented to us in our lives because of the Laws of Return and Recurrence. This is already known to all of you. However, my dear readers, although we know it, unfortunately on many occasions we see many companions falling, on the side of the road, for having allowed themselves to FORGET THEMSELVES at any given moment. All this is similar to the confrontation that Perseus made with Medusa according to Greek mythology. Medusa managed to look into the eyes of several companions of the Greek hero and, once the gaze of the Gorgon fell upon them, they were petrified and died instantly. This thing of being petrified is very interesting, because it meant that the force of the BEAST leads us directly to what we in Gnosis call INVOLUTION. Only Perseus, using the shield given to him by his Father –Zeus, the Real Being– managed to approach such a monstrosity and behead it. This shield is what we would call PRUDENCE in Gnosticism. It is proven that on this Hermetic Path he who is not PRUDENT will irremediably fail…..

We cannot and must never TRUST ourselves, for we will only be safe on the day that our Real Being is established in the AIN SOPH of the Kabbala and deigns to take us with Him. As long as we are not there we will always be in danger, because we will be moving around in the realm of RELATIVITY, that is, we will be more or less free from the risk of falling, but not entirely because there are always dangers lying in wait for us from within and externally.

Faced with these circumstances, the Dhyani-Bodhisattva then appealed to the mercy of the V.M. Aberamentho and begged him to advocate for his soul before the GREAT LAW, pledging to FIGHT MERCILESSLY against himself in order to restart his inner path and later on integrate with his Real Being. Thus, the blessed Supreme Chief of the White Brotherhood –namely: the Great Kabir of Galilee– pledged his very own person to the Lords of Destiny and asked for clemency for the Dhyani-Bodhisattva. The response of the Lords of Karma was: “Very well, we accept your proposal, but we clarify at once: if the Dhyani-Bodhisattva does not comply with the agreement and fails, both he and your own person will be sent to the Tartarus!!!”, terrible words, friends, terrible…….

From that day on, the said Dhyani-Bodhisattva took the matter of DYING IN HIMSELF MUCH MORE SERIOUSLY and dedicated himself, throughout his life, to the absolute disintegration, not only of the “I”, but also of its mother, the Beast.

All these things, dear readers, show us, point out to us, indicate to us clearly that the Hermetic Path is certainly thorny, painful, narrow, strait and full of dangers inside and outside. Anyone who does not want to understand and comprehend what we point out here has a great probability of getting lost in it, being confused and ending up outside it at any time.

A Dhyani-Bodhisattva is not similar to a simple Bodhisattva, no. In the case of the Dhyani-Bodhisattvas there is much more responsibility before the GREAT LAW, because they have already lived the path in other Maha-Manvantaras and they know the dangers, risks and difficulties that it entails. Therefore, they are not ingenuous and they know perfectly well what they are facing, this is the Law.

In the human, three-dimensional world, the codes of laws say, “Ignorance of a law is no excuse for non-compliance!!”, all of which means that if we commit any crime that is already specified in the penal code, even if we do not know the laws that penalize that crime, this does not excuse us from being brought before the earthly courts and being tried and subsequently being punished according to the same law. If this happens with earthly things, then what can we think of the divine laws, which are even more demanding?

The kingdom of heaven has its own laws, and certainly the GREAT SUPERIOR LAW is not corrupt in the least, as is often the case with earthly law.

So, patient readers, I urge you to PERSEVERE STRONGLY IN SELF-OBSERVATION so as not to fall into temptation. This is what the Lord’s prayer—the Our Father— reminds us of in its final part. This journey, esteemed readers, is extremely tiring and therefore it requires AN ENORMOUS PATIENCE and a SELF-VIGILANCE at every moment so as not to err in our steps…

I conclude this message, as always, by giving you a few sentences for your reflection:

“A promise is a bill of exchange that we draw against our future.”
Hebbel

“There are those who look like a million-dollar check against a failing bank. They promise a lot and it is not possible to get anything from them.”
Orison Sweet Marden

“Whoever promises very lightly will come to regret it slowly.”
Alonso de Ercilla