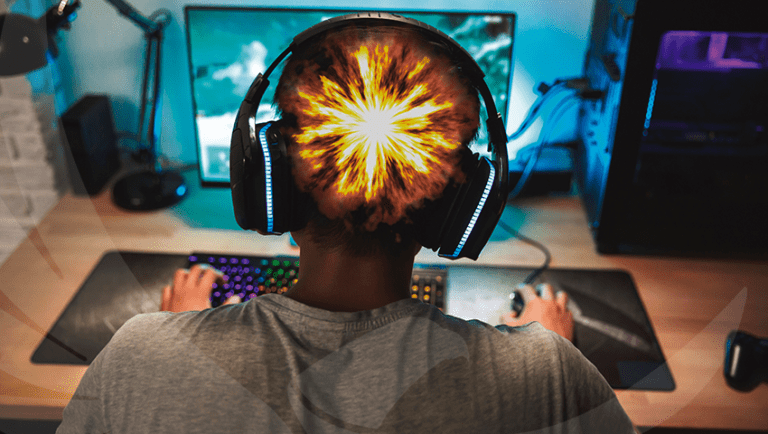 I am pleased to send you a few lines about a controversy that we can call:

In our days, friends, the whole world is being flooded by some macabre toys that are sold in the markets as video games. The unhealthy thing about all this is that those toys are made, apparently, for the distraction of our children, but such devices, being electronic, implicitly carry truly horrific programs in which wars, violence, crimes and everything that entails continuing the psychological decomposition of man and society itself are exalted…

We are in a time belonging to the most terrifying KALI-YUGA ever experienced by the human races that have preceded us in the very history of our humanity. It is written, as Emmanuel Kant so well said: “The exterior is only the reflection of the interior”, and, obviously, at the moment what exists inside Homo sapiens sapiens is the pluralized “I” with all its calamities of various kinds. In such a situation, the humanoid falsely called man projects into society the same filth that he carries within.

By any reckoning, what is evident is that if the education that is taught in schools, colleges or universities does not have any concordance with the various sacred parts that make up our BEING, if we add to that all this electronic garbage that drowns our current existence, well then it is very clear that every day we will be programmed to continue engaging in activities that violate ethics, morality, order, social balance, etc., etc., etc.

It is enough to watch the news of the various countries to realize that the human mass is becoming more and more crazy every day, without dignifying principles and without any superior goal. Our world is moving towards total chaos and every day new deadly weapons are invented capable of wiping entire nations with all their inhabitants off our map.

These video games act on the delicate and malleable psyche of children and are sowing sinister concepts in them, apart from boosting the psychological aggregates with which all of us human beings are now born. These evil toys perform in the human psyche the same diabolical tasks that have been carried out, since many years back, by the so-called pornographic magazines. These magazines present to the pseudo-men of our times an image of women as if they were all, purely and simply, PROSTITUTES. The result is abominable, for every husband will want, in a given moment, that his wife behaves as shown in the images of such savage magazines. As in the scenes shown in those publications TRUE LOVE SHINES BY ITS ABSENCE, then, naturally, many women will reject those behaviors demanded by certain husbands and in the end that marriage will end up being destroyed by marital quarrels. It is worth mentioning in passing in these pages, patient reader, that such pornographic magazines appeared in 1950, the year in which the V.M. Samael published his wonderful work entitled THE PERFECT MATRIMONY.

When that work saw the public light, internally the Black Lodge threatened our Patriarch saying: “We will attack you with our best weapons!”. Our Avatar and Master Samael Aun Weor told us:  “I thought they were going to try to kill me or kidnap me, but I never imagined that the attack would be so sinister…!”.

Why has it been so sinister? ANSWER: Because, simply, they presented THE COMPLETE OPPOSITE of what our Guru indicated in the pages of his treatise. If the V.M. Samael spoke of adoration between the spouses, caresses full of love and TRANSMUTATION OF THE SEXUAL SEED, they, the tenebrous ones, showed different WAYS OF FORNICATING, all this accompanied by animal-like gestures to incite the enjoyment of sexuality in an entirely abysmal way. This is how darkness works! Many men who became addicted to such magazines were left suffering from IMPOTENCE for the rest of their lives. Why? Because when they had to face a true sexual relationship, and not imaginary as the one shown to them by the magazines, they were not able to respond biologically. Others got used to masturbating while self-hypnotizing with the aforementioned publications, and it is written that masturbators then suffer PREMATURE EJACULATION, which is an impediment when it comes to wanting to experience the mysteries of supra-sexuality or AGNI-YOGA.

We, dear friends, who are called, according to Gnosis, to create a NEW CULTURE AND A NEW SOCIETY, must never fall into the trap of the lords of the dark face. That is why it is obvious that we should not give malevolent toys to children and neither should those of us who are already adults recreate ourselves in such scenes that video games contain, because that way we will never end our aggregates of violence of all kinds, we can never get rid of the “I” of anger, for example, and we will moreover contribute to the disorder of our emotional center, making us act or feel INFERIOR EMOTIONS OF VARIOUS KINDS.

On the other hand, if we need to come to have a CRYSTALLINE MIND in which the PEACE OF OUR BEING is reflected, can we perhaps get to have those divine gifts if we want to throw more and more garbage into our psychic apparatus? Obviously not. All this without forgetting that what we seek with meditation is to calm the 300,000 clans of the mind, which is not easy for anyone, but NOT IMPOSSIBLE if we have perseverance in our esoteric discipline.

Let us remember that phrase that was recited to our Master when he was wanting to raise the fourth Serpent of Fire: “Before the golden flame can burn with serene light, the lamp – namely: the mind– must be sheltered from any wind”… All this indicates to us the importance of taking care of our psyche if we truly want to put it at the service of our BEING. These are not words, patient reader, they are TREMENDOUS REALITIES THAT WE MUST, SERIOUSLY, TAKE INTO ACCOUNT…

I must remind you that these seemingly harmless inventions are made with the sole purpose of degrading the human being until he becomes an animal that only obeys sensations and behavioral programs that are determined for him. This is the objective pursued by certain dark brotherhoods that integrate the so-called ENEMIES OF HUMANITY. All this is done to contribute to the FALLING ASLEEP OF THE CONSCIOUSNESS and thus to have a robotic society that obeys what is commanded.

I now give you, for your reflection, some wise sentences of distinguished thinkers of history:

“Nothing is more opposed to justice than violence.”
Cicero

“Violence does not cease to have a certain kinship with fear.”
A.   Graf

“No empire conquered and ruled by violence is durable.”
Seneca

“You can’t mold your children according to the ideas of your parents. We must take them as God gives them, love them and educate them as best as possible, without twisting their inclination.”
Goethe

“The man who makes difficult things seem easy is the educator.”
Emerson