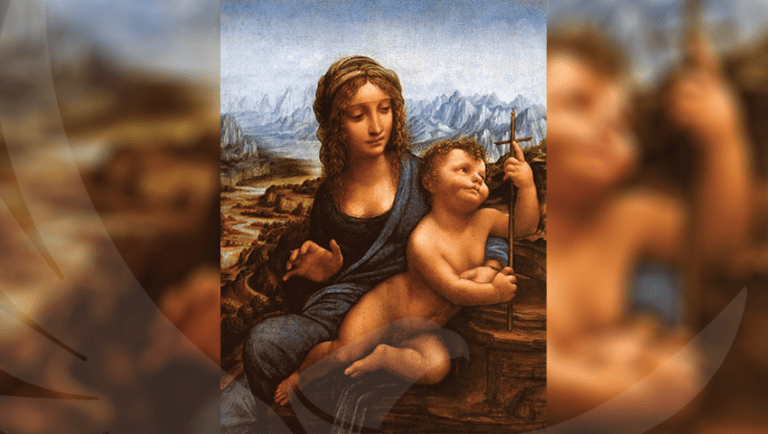 I am writing to all of you on the occasion of sending you an esoteric comment on this transcendental work of V.M. Leonardo da Vinci entitled…

First of all, friends, it is necessary to know that the theme of the Divine Mother or Stella Maris was something that profoundly inspired the mentality and the heart of the great artist Leonardo.

Some scholars of this great master of art have considered the following:

“The image designed by Leonardo depicts the Virgin Mary with the infant Jesus, who looks wistfully at a spinning wheel that the Virgin is using to spin. The spinning wheel serves as a symbol both of Mary’s domestic character and of the cross on which Christ was crucified, and perhaps it also recalls the Moiras or Grim Reapers, traditionally depicted in mythology as spinners.

The object held by the child has two horizontal sticks, one at the top and one at the bottom where the child holds it. Such an object was formerly used to collect the cotton thread, thus the painting received the name of Madonna of the Yarnwinder; but at the same time, the object becomes a Cross that wonderfully points toward the part of the rocky mountains in the background.”

However, beyond all these mental speculations it is necessary to see the message that the V.M. Leonardo wanted to bequeath to humanity for posterity. Therefore, we must emphasize that the mountains that are seen in the background of this pictorial work symbolize the high peaks related to the determination of having taken the Dry Path or Direct Path on which the Ars Magna or Alchemical Art speaks to us profoundly.

The Christ child we see in this canvas has in his hands a small cross that in turn is linked, in its structure, to what we call a yarnwinder, to indicate to us that the fate of the V.M. Aberamentho was already predetermined from on high. That is why this child obeys the order indicated by the Theomegalogos to deliver to humanity everything that the inner Great Work means….. And that was the central theme of the terrible passion that the V.M. Aberamentho had to live physically.

It is important, dear reader, to know that the yarnwinder was also associated with death that, Gnostically, represents the millenary grim reaper in charge of taking us out of this illusory world.

In the background of this painting the artist hinted, in addition to the Dry Path shown by the mountains, the Wet Path, which is marked by a river that runs meandering over the land. We can see this on the right side of the Virgin. The great Master Leonardo always kept in mind the two ways of treading the Secret Path.

On the other hand, it is good to indicate that this pictorial work warns us that the intimate Christ, since his birth in the heart of the Solar Man, is very clear about his role regarding the liberation of that man. The intimate Christ knows perfectly the exteriors of the exteriors and the interiors of the interiors, as expressed to us by the V.M. Samael Aun Weor in his posthumous work the Pistis Sophia unveiled.

Mary’s hair is braided, and in Alchemy this symbolizes the incessant crossings of Sulfur and Mercury in the occult anatomy of the Adept.

We can also see that in this canvas da Vinci showed Devi-Kundalini with a veil that covers part of her head to her eyebrows. That is the veil of Isis, who is said to be the one whose veil no mortal has lifted.

Likewise, the garment of the blessed Ram-IO is composed of a kind of black shirt –funeral– and the rest of her body is covered in a sky-blue robe to indicate that God Mother is the Queen of the Heights.

It is important to know that Master Leonardo knew perfectly the mythologies and the stories of an esoteric kind. Therefore, the fact that the small cross that the child Christ grabs is really also part of a yarnwinder is to relate it to the story of The Sleeping Beauty. We all know that Sleeping Beauty fell asleep after the sting of the yarnwinder –namely: lust– entered her fingers. From that moment on, it was impossible to wake her up from that sopor. However, one legend said that she could only be awakened if a prince were to kiss her. This prince is to be understood as the Buddhi of each of us. However, any self-conscious and autonomous part of our BEING will only be put into action if the intimate Christ commands it. Finally, that prince kissed her and she woke up from that deep sleep. Obviously, thanks to the LOVE OF BROTHER DEATH, it is possible to reduce to cosmic dust our infernal aggregates that keep our psyche dormant since millennia. Sleeping Beauty is our Essence that lost its innocence and purity when the sting of lust hurt it.

Thus, we must understand that the intimate Christ, as he grows within the human being, takes the latter out of his egoic lethargy until, finally, he achieves divine freedom. This is the reason why the Christ child in this painting points with one of his fingers to the power of the cross, because in the crossing of the lingam-yoni is the key to abandoning the millenary sleep that keeps our soul trapped. This is the Gnostic mystery of the Great Arcanum.

We must also consider that the yarnwinder, in this case, also alludes to the wheel of Samsara, of which souls are prisoners. And, thanks to Gnosis, the intimate Christ, by means of his via crucis, liberates us from this wheel to enter the kingdom of eternity.

Behold, thus, patient reader, the mystery that is hidden in this great work of royal art.

MAY THE BLESSINGS OF THE ALMIGHTY ACCOMPANY YOU THROUGHOUT YOUR LIVES.