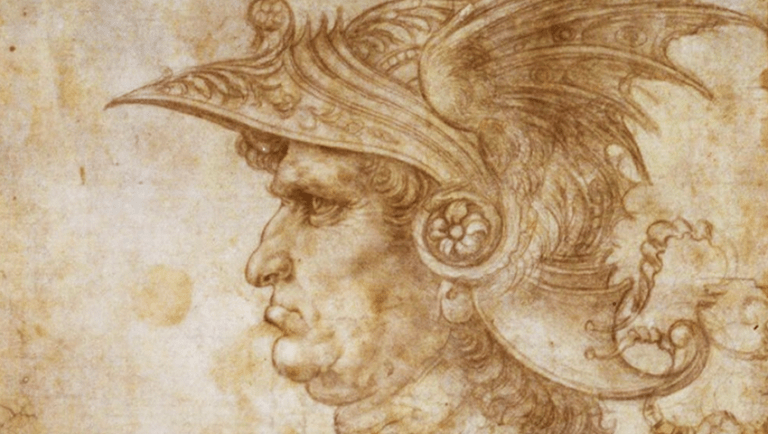 I am writing to you on this occasion to send you some comments on two sketches or drawings of the V.M. Leonardo da Vinci. The first is called The Ermine Hunt and the second is known as The Warlord or Condottiero.

Before we delve into the explanation of this first of his sketches, let us see what the intellectuals say about it:

“We have found two interesting drawings by Master Leonardo: the first one called The Ermine Hunt. It is preserved in the Fitzwilliam Museum, University of Cambridge, England.

In it, we can see a man sitting on a stone who is about to hit an ermine with a whip or a branch that has three endings. Behind the man are instruments of working the earth, a shovel and a hoe. Above the ermine is a mysterious scroll.”

Who is this man who is sitting on a stone? Answer: the worker of the Great Work. That is why behind him instruments are seen such as a shovel and a hoe, both instruments to work the Philosophical Earth ─our material body─. This leads us to remember that medieval alchemist acrostic that was called Vitriol, which, decomposed, enclosed the following sentence: Visita interiora terrae rectificando invenies occultum lapidem. Translation: ‘visit the interior of the earth and by rectifying you will find the hidden stone’. Undoubtedly, dear friends, it is a matter of finding in our profundities, by means of the incessant work on ourselves, our Philosopher’s Stone.

The whip, which has three branches, symbolizes the three primary forces of creation: the Holy Negation, the Holy Affirmation and the Holy Conciliation. All the power of the three primary forces of creation lies in the chastity that we are able to accumulate, precisely by renouncing fornication and taming our Mercury, shown here in the form of an ermine. With this, we are being told that the ermine, with its whiteness, is Mercury already united with Sulfur, which is why we can call it Sulfurized Mercury or Mercurial Sulfur. We need to take ownership of that sacred matter and this is why the man in our engraving wants to possess it by catching the ermine. Over the ermine we see a scroll that floats above its head to indicate to us that the science of Alchemy has said many transcendental things concerning this task.

Below we attach the second drawing called The Warlord, made by Master Leonardo approximately in the year 1475 and it is kept in the British Museum in London.

Historians say: “Dressed in ancient armor, the condottiere wears a helmet decorated with scrolls and floral elements, while the dragon’s wings stretch out from the temples. On the chest, the armor, richly ornamented, there is a protruding lion’s head.”

This other drawing, which shows the Warlord, illustrates for us nothing less and nothing more than the Martian Logos –the conception of the V.M. Samael that the painter had at that time–.

Undoubtedly, patient reader, Samael is the Geni of War within authentic esotericism and within the Kabbalistic narratives that already existed back then. This Warlord is dressed in a helmet that is characterized by having dragon wings –an allegory of the volatile alchemical element, Mercury–, and on his breastplate we see a lion’s head, a symbol of the fixed element: the fire of Stella Maris. His body is covered in warrior armor. Furthermore, on his helmet, on the back of it, we can also see two scrolls, on which the Martian wisdom would be written. Flowers can also be seen on this helmet, representing human virtues.

All this is telling us that Master Leonardo da Vinci knew perfectly everything related to Sidereal Magic, Kabbalah, Alchemy and other knowledge, all of which allows us to qualify him as a genius.

I now give you a few sentences to be reflected upon:

“The genius always triumphs. The genius who allows himself to be defeated is never a genius.”
Benavente

“Genius is a revelation from God.”
Calderón

“Talent is a magistracy; genius is a priesthood.”
Victor Hugo

“Genius is made up of two percent talent and ninety-eight percent persevering application.”
Beethoven

“The genius must think that he was born, not for himself, but to be useful to the world.”
Luciano