VOPUS Gnosis > Articles > The lady with an ermine 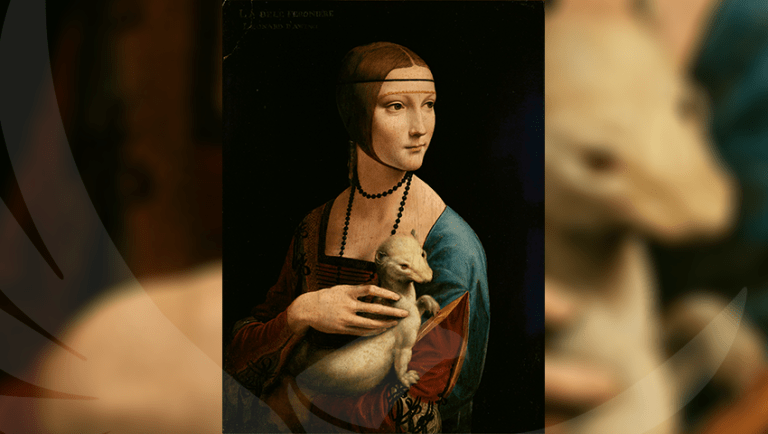 I want, on this occasion, to send you a few words about another of the mysteries that surround the works painted by the great Master and Initiate of Major Mysteries Leonardo da Vinci. I refer clearly to that which has been called:

THE LADY WITH AN ERMINE

Few people know that Leonardo was a legitimate clairvoyant, what we might call today, Gnostically speaking, a turiya, that is, an objective clairvoyant. That was the reason why Leonardo was able to paint on a canvas nothing less and nothing more than his Divine Mother, and as the background of his oil painting, he very wisely described the Humid Path and the Dry Path of the Ars Magna. For this reason, this painting has gone for centuries and centuries without being understood by the so-called “art experts”, because they could not figure out why the Mona Lisa had that enigmatic smile.

Endless absurd theories were established about who this lady was. Some said she was a lover of Leonardo, others that she was a relative of the Medici family, others that she was a friend of the painter, etc., etc., etc. Only thanks to the enlightenment of our Guru and Avatar, the V.M. Samael Aun Weor, today we know that the famous Mona Lisa was his own inner Divine Mother, or the particular Stella Maris of each one of us…

Actually, Leonardo da Vinci, in addition to being a painter, inventor, clairvoyant and Initiate in the mysteries of the White Brotherhood, was an enormous connoisseur of the sciences of Kabbala and Alchemy, and for such a reason he was able to use all this knowledge when making his works, which have remained as treasures of art for eternity. However, esteemed readers, on this occasion I want to tell you about another of his transcendental paintings, and I refer emphatically to that other work of art entitled The Lady with an Ermine…..

We must know that the ermine is a normally white animal that hates to get stained, it is something that is in its nature, and this reason led medieval alchemists to associate it with the mercury of the sages or mercurial waters.

The Adept Fulcanelli refers to the ermine with these words, let’s see:

“We find here again a motif already found elsewhere, especially in Brittany. It is an ermine, figured inside a small enclosure that limits a circular fence, a particular symbol of Queen Anne, wife of Charles VIII and Louis XII. It is seen figuring, next to the emblematic porcupine of Louis XII, on the bell of the great chimney of the palace of Lallemant, in Bourges. Its epigraph contains the same meaning and uses almost the same words as the famous motto of the Order of the Ermine: Malo mori quam foedari,‘I prefer death to a stain’ [Rather to die than to be dishonored]. This order of knighthood, first founded in 1381 by John V, Duke of Brittany, was to disappear in the fifteenth century. Then restored by the King of Naples, Ferdinand I, in 1483, the Order of the Ermine had lost all hermetic character and formed nothing more than an inconsistent association of patrician knighthood.

The inscription engraved in the phylactery of our coffered ceiling reads:

‘Rather to die than to be dishonored’. Beautiful and noble maxim of Anne of Brittany, maximum of purity applied to the little carnivore whose white skin constitutes, it is said, the object of attentive care of its elegant and flexible possessor. But in the esotericism of sacred art, the ermine, image of philosophical mercury, points to the absolute sharpness of a sublimated product that the addition of sulfur or metallic fire contributes to making even brighter.”

So, it is clear that the ermine comes to symbolize the sulfurized Mercury, in other words, the Genesiac waters already fertilized by the fire of Stella Maris.

Who is this woman that Leonardo wanted to represent with this ermine?

Some pseudo-scholars who have analyzed this work of art have launched truly absurd theories about it. They have come to affirm that this lady was a lover of such-and-such a man, other theories say that it was a woman who suffered from the disease of syphilis and that she transmitted it to her lovers, others launch really crazy opinions; however, everything remains as hypothesis, because in reality no one is sure of having known this maiden.

Having gotten this far, it is good to ask ourselves then: Who did Leonardo da Vinci actually want to represent as a beautiful lady holding in her arms such an animal that hates to get stained, and even more so knowing that the hermetic order of the ermine came to exist?

Answer: We find ourselves, friends, before the pictorial representation of the Buddhi, or Divine Soul, of the very Leonardo Da Vinci himself. That is why she appears accompanied by the ermine to make note of the chastity that such a woman enjoyed.

This is the task of true hermeticism that offers humanity the mysteries of the kingdom of heaven under the veil of literature, music, sculpture or art.

Let us remember that when a Master of the White Brotherhood falls or loses his status as Master, he loses all his five Serpents of Fire, but the sixth and seventh serpents –corresponding to the Buddhi and the Intimate– do not fall. This is precisely because the Buddhi NEVER PARTICIPATES IN SIN, NEVER GETS STAINED, and from there originates that hermetic phrase:  MORI POTIVS QVAM FEDARI, ‘rather to die than to be dishonored’… This is the reason why we see that this woman also wears a kind of veil that covers part of her forehead.

Let us meditate on all these mysteries, patient reader, for while it is true that the glory of God consists in concealing his secrets, that of man consists in discovering them…..

I leave you now a few sentences to be reflected:

“Art is the truth because it creates what should be.”
Simon Bolivar

“All art is imitation of nature.”
Seneca

“To reveal art and conceal the artist is art’s aim.”
Oscar Wilde

“The agitation of art is natural and healthy, and the soul that feels it suffers more from containing it than from giving it an outlet.”
Jose Marti