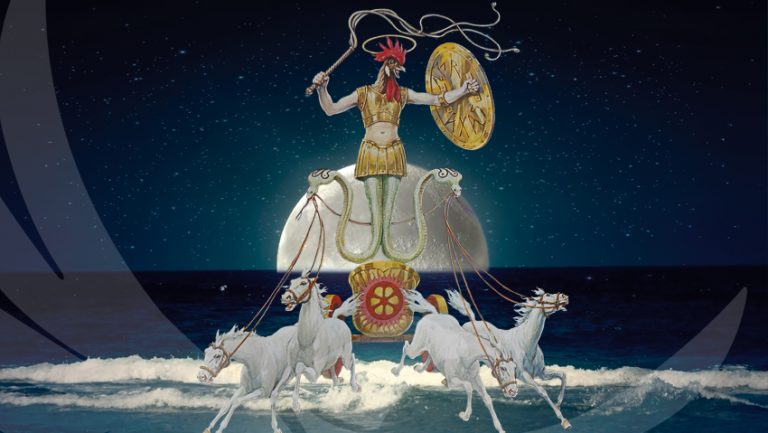 On this opportunity I want to send you some reflections about:

THE MYSTERY ENCLOSED IN THE ABRAXAS

First of all, it is necessary to know that the so-called ABRAXAS is a pre-Christian symbol that already existed in the pre-Christian Gnostic communities and, when Christianism was accepted by the Roman Empire in the times of the Emperor Constantine, the Roman generals used to wear on one of their fingers a ring with the figure of this mythological God. According to those generals, that symbol protected and assisted them during the battles.

The Abraxas is made up by a figure that has a rooster head, a human torso and, instead of legs, it has two snakes. This may read better: It carries a whip in one of its arms and holds a shield to protect itself in the other.

Trying to decipher this divinity from a Gnostic point of view, we will say that the rooster head represents the state of alert novelty. On the other hand, the rooster was a mythological companion of the God Helios ─the Sun─ and he announced the dawn with his crows. In other words, the Sun would be associated with the Consciousness and it is the Consciousness that announces to the soul its new awakenings or dawns.

On the other hand, the human torso alludes, clearly, to the fact that the changes that have to be produced in the Adept who knows these mysteries, have to be made within himself.

The two serpents represent the YIN and YANG principles of Taoism, as well as the Sulphur and the Mercury of the wise that the knowers of the Ars Magna mention.

The shield carried by Abraxas is alluding to the prudence that the devotee of the secret path must always maintain each time he takes a step forward.

The whip that he carries in his left hand allegorizes the Martian will of wanting to remove and destroy the undesirable elements from our suffering psychology.

Moreover, it is good to know that this divinity ─Abraxas─ appears symbolized up in a chariot that is pulled by four horses. The chariot represents the physical body of the intrepid adventurer who goes in the search of his supreme reality, and the four horses that pull that chariot symbolize the four bodies of sin, namely: the Physical Body, the Astral Body, the Mental Body and the Causal Body…

These four horses could also be representatives of the four elements that constitute our world: fire, air, earth and water.

All this symbolism, dear friends, tells us of a very powerful energy that the primitive Gnostics have compared to the Pleroma itself ─a state of eternal plenitude─ however, they said that, likewise, this energy could raise or bury the human being, because its activity was characterized by a duality, that is, it could be used by the forces of good or the forces of evil. This context clearly indicates that it is the SEXUAL ENERGY, the only one capable of disintegrating the demon “I’s” and, at the same time, the only one that can generate within the Homo sapiens sapiens a true unbreakable and conscious will-power ­─namely, the whip─.

It is clear that the creative energy humiliates or elevates the terrestrial humanoid. If he TRANSMUTES his creative energies he elevates and develops spiritually, if he FORNICATES he degenerates and becomes a slave of the senses and of the animal “I”. Here is, thus, its duality.

Obviously, as a redemptive divinity, ABRAXAS invites us to remain vigilant as the sentry in times of war in order not to allow our animal Ego to devour us and lead us to the animic involution.

The investigator Stephan Hoeller ─a scholar of Gnosis─ provides us with some data that I consider very important in this topic, let us see:

“Despite the fact that very little information is available today about Abraxas, and that his name appears infrequently in the magic papyrus and in some Gnostic texts evidencing his Egyptian influence, it still seems quite reasonable to think that Abraxas was a mysterious and superior archetypical figure in some forms of Gnosticism.

By virtue of purely technical interest, it could also be mentioned that some of the best known Abraxas amulets contain at their bottom the word sabao, a clear reference to the name Sabaoth, which means ‘host’ or ‘army’. The association of Abraxas with Sabaoth certainly manifests itself as a significant fact. “

Let us all remember that in the Conjuration of the Seven of the Wise Salomon we, the Gnostics, conjure the antithesis of Logos Samael, whose name is Adramelech, in the following way:

”By Samael Sabaoth and in the name of Elohim Gibor, go away, Adramelech…..”

With this conjuration we call the angelic armies of the Martian Logos to fight against this demoniac force.

This is the equivalence between Sabaoth, Samael and Abraxas…

And Stephen Hoeller continues by telling us:

“The meaning of the figure of Abraxas emerges in a new light when the name is decoded according to the principles of numerology, a discipline that was highly respected in the ancient world in both Jewish and pagan circles.

It has been suggested that the number 365, which corresponds to the days of the year, could represent the deity who rules the whole of time and by whose power time is simultaneously created and uncreated. The non-creation of time ─like the Buddhist endeavor of escaping the dominion of the monstrous God Makahala, sovereign of the wheel of duration, which never stops spinning─ is a truly Gnostic concern. In one sense, it is possible to consider it as the hallmark of the authentic Gnosis possessed only by the most accomplished spiritual or pneumatic individuals.

Abraxas, the energy of the Being that dominates everything, is the sum of the cycle of necessity and, at the same time, the one that liberates man from the agony of time or, as Mircea Eliade called it, “the terror of history…”

And, on the other hand, this investigator emphasizes:

“In addition to its numerical value, the name Abraxas has another secret meaning, indicated by the fact that it consists of seven letters. These seven letters have been related to the seven rays of the creative powers of the planetary spheres, which in Gnostic systems signify creativity and, at the same time, the restrictive nature of the cosmos. It is said that the seven sovereigns of the world, whose physical symbols are the seven sacred planets, act as guardians of the soul and, at times, as its jailers. The ignorant or unconscious individual is governed by the planets or, rather, by the psychological forces and complexes represented by the planets. Thus, when anger seizes an unconscious or non-Gnostic individual, his personality is overwhelmed by the force of Mars; a person can be possessed by Venus when under the spell of a romantic desire and another can be dominated by the curiosity and greed of Mercury, and so on and so forth.”

After all these concomitances, dear friends, we come to the sound conclusion according to which Abraxas, the primordial energy of Creation that has its correspondence with our creative energy, becomes, according to our null psychological work, a knife that buries itself in our depths to tear us apart in every way. However, when our work UPON OURSELVES  is fruitful, then it becomes OUR LIBERATOR…

Now we only have to remember that phrase heard in an ancient initiation ceremonial: “KEEP WATCH AND PERSEVERE, YOU STILL HAVE TIME!!!”

MAY THE FORCES OF SAMAEL SABAOTH FILL YOUR SOULS WITH LIGHT ETERNALLY.
Kwen Khan Khu