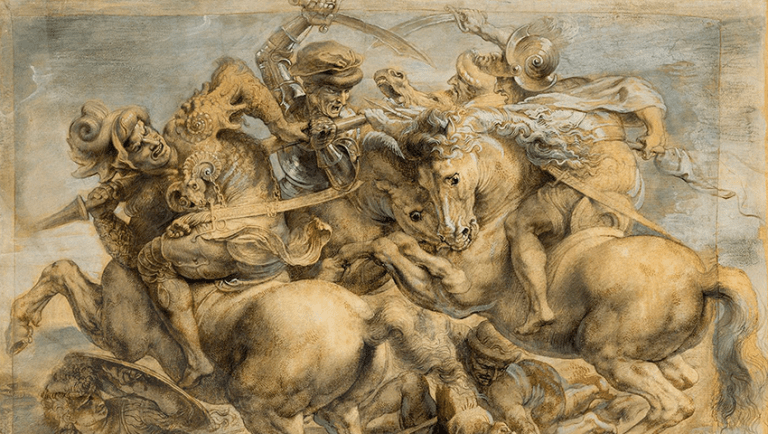 It is with great pleasure that I send you two paintings, one of them once more attributed to Leonardo da Vinci and the other to Michelangelo Buonarroti.

I attach, first of all, the comments that laymen have poured out about these two works of art, let us see:

“The Battle of Anghiari is a fresco by Leonardo da Vinci, now lost. It was painted on a wall in the Hall of Five Hundred of Palazzo Vecchio in Florence. Leonardo left Florence leaving the painting unfinished and it disappeared later when Giorgio Vasari was entrusted with the decorative remodeling of the great hall. The painting with its seven characters and four horses could be reconstituted thanks to several of the preparatory drawings made by Leonardo da Vinci and numerous copies. The most famous of these replicas of the lost fresco was made by Peter Paul Rubens and is preserved in the Louvre Museum.”

“History also tells us that the Grand Council of Florence had brought together the two most important Florentine artists of the Renaissance: Leonardo and Michelangelo, to adorn the walls of the great hall with two monumental works of seven by seventeen meters. Michelangelo was to depict the Battle of Cascina, while Leonardo would paint the Battle of Anghiari on the opposite wall. But the mural remained unfinished, supposedly due to the failure of the experimental technique he used to execute the work. Leonardo’s contract was signed by none other than Machiavelli –Niccoló di Bernardo dei Machiavelli–.

It is known that Michelangelo also failed to finish the work, only partially finishing the great painting. For its interest we attach Michelangelo’s mural painting, the Battle of Cascina –a copy made by Bastiano da Sangallo–”.

Honestly, dear readers, this work by Michelangelo does not seem to represent a historical battle. Nor that of Leonardo, who depicts the warriors with helmet and armor in a merely symbolic way. Rather, it is meant to illustrate matters of the inner path.

In reality, Leonardo’s painting shows us the internal struggles between the seven deadly sins and the four bodies, namely: the physical, the astral, the mental and the causal; the seven deadly sins are represented by the seven characters who fight to the death. This is how the “I” works within each of us. The “I” only knows violence and practices it constantly, that is its dynamic.

Referring now to the painting by Michelangelo, we find wonderful symbols, such as coming out of the waters, also showing the spine, dressing in the garments of the soul, wearing a helmet with the eagle on top, covering the head with a white linen…

We are struck by the bearded central character, the only one who carries a lance. Such a character symbolizes the profound inner BEING struggling to recover his autonomous and self-conscious parts that integrate Him. This reminds us of the drama of Moses. We all need to be saved from the waters.

Above this bearded man we see a warrior blowing a trumpet. This is done by a part of the BEING that tries to draw the attention of all other ontological forces.

Note that instead of weapons many of the characters are using staffs. So here is the question: who goes into a battle with staffs? Of course, it is an alchemical symbol.

Undoubtedly, these two great works were sabotaged by the Machiavellianism of the rational humanoid.

I now send you a few sentences to activate your reflections:

“Big men are simple and medium men are bombastic for the same reason that cowards are bullies and brave men are not.”
Balmes

“Man rises above the earth with two wings: with simplicity and with purity. Simplicity must be in the intention and purity in the affection.”
Kempis

“The child and the old man have no hope but the sensitivity of others.”
Le Tourneur

“True lordship is to possess nothing.”
Saint Teresa

“What you think belongs to everyone. Only what you feel is your own. If you want what you think to be yours, you have to feel it.”
Schiller