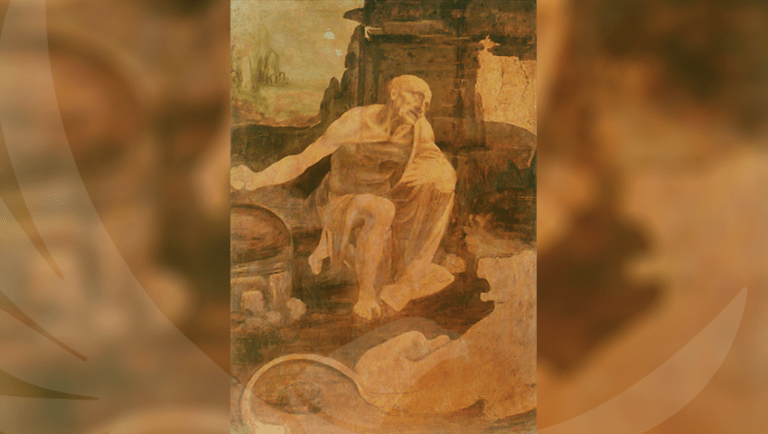 Allow me today to delve into some explanations concerning the work by Leonardo da Vinci entitled:

It is interesting to know that this work, according to some, also represents Saint Gerasimus and not only Saint Jerome. Therefore, I want to send you some comments from some intellectualoid specialists about Saint Gerasimus.

“According to the accounts, one day when the monk was walking along the banks of the Jordan, a wounded lion approached him. Gerasimus examined its paw and extracted a sharp thorn from it. From then on, the lion stayed with him and became a tame animal. The monks entrusted Gerasimus with the care of a donkey in the monastery, which had the task of fetching water. One day some Arab merchants stole the animal and Gerasimus accused the lion of having eaten it, so he gave it the task to start fetching water for him. Sometime later, the merchants returned and the lion recovered the donkey. Gerasimus recognized his mistake and gave the lion the name Jordan.”

The truth, dear reader, is that this is Saint Jerome. In this work, according to some historians, the penitent has a stone in his right hand to punish himself. According to them, the sign of the beating or self-punishment can be seen on his chest. However, the stone that Saint Jerome has is allusive to the “stone of stumbling” or “rock of offence” of which Paul of Tarsus always spoke to us.

The landscape surrounding the scene is very austere and rocky. His gaze of repentance is directed at a church, according to the sketch.

The stony object that exists under his outstretched hand is striking, as it also looks like the dome of a church, but it can also be associated with an alchemical athanor. Obviously, Saint Jerome, repentant, knew very well that the human race had attacked the church of love, that is the reason for his gaze.

On the other hand, near him we see a lion, whose body and tail seem to depict the letter S, a living allusion to the Sacred Fire, the fire that redeems us. The wound on the chest of Saint Jerome represents the enormous moral sorrow that we come to feel when we know that we have attacked the Holy Spirit, the Holy Conciliation.

Note the lion’s tail together with its body portray the letter S.

We add these words of Master Samael that we have found, precisely, in the book The Seven Words, page 25:

May the blessings of Parabrahma be with all of you for all eternity. .

I now add a few sentences for your reflection:

“The Conscience of the righteous man laughs at the deceptions of fame.”
Ovid

“Harmony is obtained by virtue.”
Plato

“Love purifies the spirit and nourishes the imagination pure love, holy love, love without vile interest and without despicable intention, is the highest aspiration of the Spirit, the immortal stanza sung in chorus by all beings of creation, from the atom that swirls at the contact of light and heat to the admirable machine that strengthens the stars in their gigantic ellipses, in the circles that they eternally trace in the blue of the immense heavens.”
Ruben Darius

“Love is the most benign and the best of moralisms.”
Bacon

“Love resembles a tree: it bends under its own weight, deeply rooted in our whole Being and sometimes turns green in the ruins of a heart.”
Victor Hugo