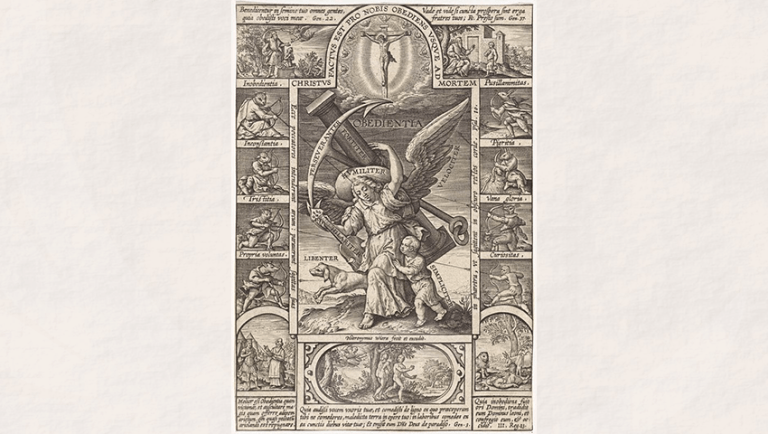 I send you all the present engraving that was the work of the illustrator Wierix Hieronymus, who lived between the years 1553 and 1619 and had Flemish nationality.

The engraving is entitled…

Our teachings constantly insist on the need for KNOWING TO OBEY our Real Being. Even so, friends, it is necessary to know how to do it.

Observe first of all that the central figure, at the top of this engraving, is the image of Our Lord CHRESTOS, a crude and living example of supreme obedience to the Father, because at all times he knew the drama he had to represent and spent absolutely his whole life preparing himself to face what he had to perform until, finally, he fulfilled it fully. We do not see that every day and it does not happen often either.

The present engraving, likewise, is accompanied by several sentences written in Latin that are allusive to the representations it contains, let us see:

‘In your seed all the nations of the earth shall be blessed, because you have obeyed my voice.’ ─Genesis 22:18, chapter: “God commands Abraham to sacrifice his son”─.

For millennia the sacrifice of Abraham has served as an example of ultimate obedience to all Christian spiritual and mystical orders. Obviously, from the kabbalistic symbolic point of view, Abraham represents Kether and his son Isaac would come to represent Chokmah –the Christ, the Second Logos─. This sentence accompanies the first engraving that appears to the left of the crucified.

‘And Israel said unto him: Go now, see how your brothers are —and how the sheep are—and bring back word to me.’ —Genesis 37, chapter: “Joseph sold by his brothers”—.

Undoubtedly, this phrase is alluding to the fact of never selling the sheep –or the brothers– for thirty silver coins, that is, we must never exchange our fraternity and love for material things. We see this sentence next to the area on the right side of the engraving.

‘Christ became obedient unto death for us.’

This sentence borders or surrounds the image of the Christ, whom we see surrounded by Cherubim. Certainly, the V. M. Aberamentho demonstrated his determination to serve the Father until the last moment of his process. This invites us to NOT BE WEAK and to stand firm on the path until the end of it.

This other sentence runs around the central square and means:

‘Behold, sinners have drawn the bow, separated their arrows in the quiver to strike in the darkness the righteous of heart’.

Darkness is at all times looking for the opportunity to strike with their weapons the devotees of the Secret Path. They always do it protected by darkness.

‘Obedience is better than offering sacrifices, and listening is more than offering fat of rams. For disobeying is almost like the sin of fortunetelling’.

Certainly, dear reader, obedience is worth more than many things, even more than promises and the offering of offerings —the ram fat— for disobedience is the daughter of mystical pride, and this has been the bane of the values of many mystics and anchorites since ancient times. Due to disobedience many disciples and even Masters who came to know our Avatar of Aquarius, V.M. Samael Aun Weor, strayed away. In his work Igneous Rose, V.M. Samael makes a full differentiation between fortunetellers [Spanish: adivinos] and Prophets. Because the preposition a [in the Spanish ‘adivino’] turns the word adivino into someone who is against divinity, who challenges it by presuming to be superior to it. Therefore, lovers of Gnosis will never be fortunetellers [Spanish:adivinos] but we do aspire to be Prophets or Prophetesses.

‘Because you have eaten from the tree of which I commanded you, saying, ‘You shall not eat of it’: cursed is the ground for your sake, through painful toil you shall eat of it all the days of your life… And the Lord brought him out of paradise’. ─Gen. 3:17-23─.

This sentence is related to the angelic fall of the human race. Since the human couple began to FORNICATE, it began to fall into the hands of the Great Law. The earth began to be filled with pain and the lives of men lost happiness and knew misfortune. Undoubtedly, from then on, the human species lost the PARADISE OF CONSCIOUSNESS and was trapped in the darkness of the “I” and its Mother the Beast.

‘Now when the prophet who had brought him back from the way heard it he said: ‘It is the man of God’… who was disobedient to the word of Jehovah; therefore, Jehovah has delivered him to the lion, which has torn him and killed him.’ 1, Kings 13:26.

The sentence presented here tells us that, certainly, he who hears the words of the Prophets –Masters of the White Brotherhood, Avatars, etc., etc.– will be redeemed, will be assisted again, even if at one point in his pilgrimage he has ignored the word of God. However, he who remains rebellious to divine warnings will be handed over by divinity to the Lion of the Great Law, who will break him and kill him —namely: will make him involute—.

Now then, illustrious reader, in the center of this engraving we see an image of an angelic individual carrying three things on his shoulders: an anchor, a pillar and a violin…

The pillar reminds us that we must all become pillars of the temple of the Father who is in Heaven. Let us remember the words of the Holy Scriptures: “Be faithful unto death, and I will make you the pillar of my temple.” The pillar is also the symbol of the spine through which the Sacred Fires of the Holy Spirit must ascend.

The violin reminds us of the musical octaves on the basis of which we must provoke the revolution of our Consciousness.

Something important to keep in mind is that at the base of the anchor is written in Latin the word perseveranter, which reminds us that our alchemical work must be done with perseverance.

Likewise, the violin is inscribed with another Latin word: hilariter, which invites us to make our pilgrimage with joy. On the other hand, the pillar is printed with the word fortiter, which we must here translate as ‘strongly’, for we must become strong pillars of the Father who is in secret.

We must also observe a little dog that runs parallel to the sacred individual and is indicated with the word libenter, which must be translated as ‘gladly’. This gives us to understand that our inner work must be carried out with love for the Father, with fidelity to the BEING.

The hat worn on the head by the angelic entity bears the Latin word humiliter. The hat reminds us of the hat of the Apostle James, who has been shown in many treatises as the “pilgrim savior”, alluding with it to the very Mercury of the wise. However, in this representation such a word emphasizes to us that our steps towards the kingdom of the heavens are to be humble and never haughty steps.

A child also walks accompanying the angel of our topic. Such a child, in addition to representing the innocence that we must achieve, is indicated by the word simpliciter, wanting to indicate that we must be simple as children are. Let us not forget the words of the Great Kabir of Galilee when he said: “Let the children come to me because in truth I assure you that the kingdom of my Father belongs to them.”

The wings of the sacred individual are accompanied by the word velociter, which emphasizes the need to act fast, quickly, in other words, it calls upon us not to waste time miserably on the things of the world…

Above the angelic devotee is the word obedientia because the whole theme of this engraving revolves around knowing how to obey the Father who is in secret and knowing how to abide by the rules of the Secret Path. Those who do not know how to obey sooner or later will get lost in the labyrinths that exist on both sides of the rocky path.

Well, esteemed reader, the words we have just analyzed accompanied the central figure of our engraving. However, on the right and left sides of it we observe animal-like creatures –symbols of our psychological aggregates– that precisely point and launch their poisonous arrows towards the sacred personage that we have explained before. Let us look at those words so that we understand what they want to express to us:

Inobedientia: Disobedience, inviting us not to obey the BEING.

Inconstantia: Inconstancy, inviting us to NOT BE CONSTANT.

These horrible qualities will always try to interrupt the steps of all those who, firmly, want to merge with the Real Being of Secret Philosophy. Behold the counterpart of all those beautiful qualities that accompany the symbols of the mystical personage…

I now allow myself to leave you a few sentences for reflection:

“That which always and everywhere has the same validity and not because it was pleasing to anyone is just by nature.”
Aristotle

“Being good is easy, what is difficult is being just.”
Victor Hugo

“The fruit of the righteous is the tree of life, and he who ignites souls is wise.”
Biblical Proverb

“The most excellent of all virtues is justice.”
Aristotle