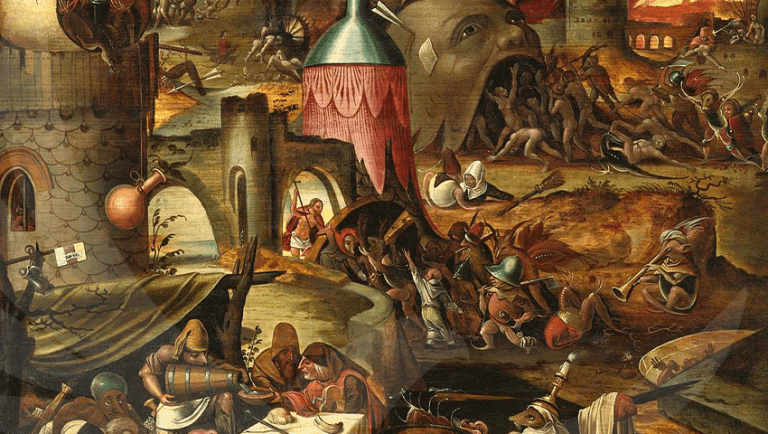 I hasten to write to you, patient readers, to send you a comment that was fortunately delivered by our Avatar in one of his lectures contained in The Fifth Gospel. In it, the Venerable Master describes to us in detail what they are like, certainly, the experiences that the souls suffer in the involutionary circles of our planet when their INVOLUTION has come to them.

Your servant bears absolute testimony that these truths expressed by our Avatar are absolutely unfailing, for my Real Being has allowed me to be in such regions and they are exactly as described by our blessed Guru.

Without further ado I leave you with the words of the Exalted One:

THE FIVE REGIONS OF THE INFERNAL WORLDS

“There are one hundred and eight existences, and the tree that does not bear fruit is cut down and thrown into the fire. It is not at all pleasant, my dear brothers, to enter the Infernal Worlds. The first zone under the epidermis of the earth is very similar to life here, on the surface. In that first zone, we have people dressed in the same style as here: merchants, markets, nightclubs, cafes, people dressed in a similar way.

In the second zone you can already see black mages in their red, black robes; black mages dressed in their garments with pierced dragons, their red turbans; temples of black magic, etc.; princes of darkness, that is, great lords like Bael, Baal, all of them.

In the third zone evil grows, horrible things are seen.

Out there, in the fourth or fifth zone one already sees the anti-human beings turned into beasts; horses with horns like the unicorn, gigantic dogs with horns, beastly figures of all kinds. They have entered a state of animal involution.

Then, from the fifth zone onwards, one begins to see those who were humans here –or at least humanoids– turned into something similar to plants. They look like shadows passing through the walls of those mansions of the Black Lodge, shadows sliding like branches, etc. The plant process is being recapitulated.

Then, in the living nucleus of the Earth, in the entire center of planet Earth, we can perceive the lost ones turned into stone.

I once remained inside our planetary organism investigating for hours on end, moving in the astral through that living nucleus of planet Earth. That was frightening, a heavy atmosphere. There, some witches of the Avernus passed near me, entered a horrible kitchen to prepare their potions, still in those regions they were concerned about doing evil. It occurred to me to enter the ominous hovel that I found there and on a bed of pleasure I saw a prostitute who was disintegrating slowly, little by little: she fornicated, cohabited with whatever larva that passed through those places, and she melted away –for you to realize– like a candle, slowly, losing her hands, arms and feet little by little. Suddenly, I saw a stone with a kind of head moving. I said something and that head limited itself to repeating what I said; I said something else and the head repeated it; and whatever I said, that head repeated it. He was someone who had been a terrible black mage and now he was fossilized, in the process of disintegrating. I spent many hours in those regions, investigating. The lost ones turn to dust, and they suffer horribly because the time is excessively long. There, the minutes seem like centuries, unbearable time as a rock. Many cry out for death, and she is slow to arrive. Blessed are those who die there, because at last they come out into the sunlight. But those who do not die yet, those who have to wait, plead for death, pray for it, that is their pain. However, in the end, they die as well.

We see all of them, absolutely all the lost ones, in a process of deterioration, of an involutionary type, from region to region through the nine circles until reaching, finally, the city of Dite, as it is symbolically called in The Divine Comedy, that is, to the very nucleus of the Earth, to its center of stability. They descend according to the law of gravity of the worlds, according to the law of fall. And if one carefully observes that center of stability, one sees how all the cosmic forces converge there, because within that very nucleus, in a certain superior atomic zone, one already finds the Devas who are waiting for him. When someone has gone through the Second Death, when the Essence has been liberated, when the Ego has been turned to dust, then such an Essence is examined by the Devas and if in truth they find it pure, such an Essence comes out through those atomic gates to the sunlight, to the surface. That is to say, there are combined things of involutionary type and those of the Spirit in that center of stability. There the Second Death is achieved that gives us access to a new evolution, there pristine purity is achieved. It would be the maximum of the descent and, precisely there, at that maximum point, evolution restarts.”

I now leave you some sentences to be reflected upon:

“If chastity were not a virtue, however, it would certainly be a force.”
Jules Renard

“He who spits into heaven makes it fall back on himself.”
Juan de Torres

“Work on preventing crimes so you don’t need punishment.”
Confucius

“Then the dust will turn to the earth as it was, and the spirit will return to God who gave it.”
The Bible