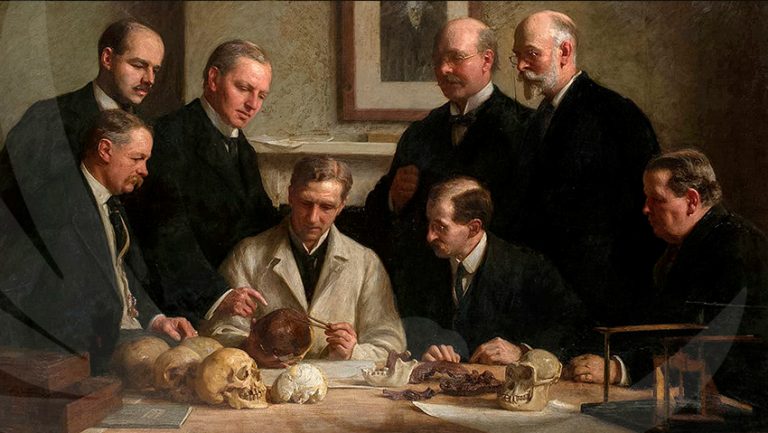 I hasten to send you the information that I believe Gnosis can offer to the blind panorama laid out by the so-called modern science of today. For this purpose, I intend to show the other side of the coin that DIALECTICAL MATERIALISM and HISTORICAL MATERIALISM try to impose upon us with their false pseudo-scientific premises. To do this, I pick up the title of a great researcher and true scientist as is Rupert Sheldrake. Here we go:

The Mirage of Science: The 10 Dogmas of Today’s Science

Biologist Rupert Sheldrake, one of the few scientists who have ventured beyond the limits imposed by the paradigm of what is supposedly the established reality.

As part of his book The Science Delusion, Sheldrake discusses how science, similar to religion from which he sought to liberate the human mind, holds certain unquestionable beliefs about the nature of reality.

“The mirage of science is the uncritical belief in these dogmas, treating them not as beliefs but as truths… Science is much more fun, interesting and free when we turn these dogmas into questions.”

This is Sheldrake’s great courage: dealing with issues that would be ridiculous to other scientists (or frightening since they could cause them to lose their scholarships) such as questions, possibilities. Do we have telepathic communication with our pets? Does nature have an inherent incorporeal memory? Are we affected by what a person does elsewhere in the world?

These are just a few of the things investigated by Sheldrake, the Cambridge graduate biologist who has been excommunicated by the official scientists, priests of a new religion.

The ten dogmas of science:

1. Nature is mechanical: Everything is believed to be similar to a machine, not an organism. Animals and plants are like machines, we are like machines.  “We are walking robots” (says Richard Dawkins), machines controlled by genetically programmed brains. A metaphor that has dominated science since the 17th century.

The absurd idea that the Universe, Nature and all its kingdoms come from a simple mechanical source is, really, an invective. This is, in truth, proof of the clumsiness of what we in Gnosis call the SENSUAL MIND. The sensual mind elaborates its concepts of content with what it receives from its five senses, which incapacitates it to carefully study the mysteries of life and death. The human being is not a robot, but the false science of our day is indeed transforming him into a robot with its traditional dogmas.

2. Matter is unconscious: The whole universe is made of unconscious matter: there is no consciousness in the stars, in the galaxies, in the planets, in the animals, in the plants and there should not be any in us either.

3. The laws of nature are fixed: They are the same today as they were during the Big Bang and as they will be forever. Life evolves but the physical substrate on which it does so is immobile.

You really need to be very BLIND to think that the laws of nature are fixed. Every day Nature itself and the Universe itself show, through their phenomena, that they are constantly modifying to adapt to the metamorphosis that creation establishes. Besides, that BIG BANG dogma is proper to make sci-fi lovers laugh. Who was there to see the famous BIG BANG when it took place? Who filmed it to show it to the multitudes?  Why are things that are just hypotheses asserted?  Is it perhaps not they, the so-called scientists, who say that we should not believe in hypotheses but in proven facts? Why are these pseudo-sapient using this double standard when wanting to judge phenomena?

4. The amount of matter and energy is always the same:  The total amount never changes, except at the time of the Big Bang when everything came into existence from nothing in a single instant.

Again the tale of the BIG BANG, the homunculi of modern science want to make fun of us. Who has gone to measure the amount of matter and energy to establish in a Solomonic way such an intellectual stupidity? Is there a meter for matter and energy that is able to calculate their quantity at the cosmic level? This is simply loose talk, typical of the humbug of pseudoscience, which has led it countless times to have to RECTIFY WHAT IT HAD PREVIOUSLY PROCLAIMED AS A LAW. Let us simply remember that the Earth was not round but flat, which fell apart when Christopher Columbus made his journeys to America.

5. Nature has no purpose: There is no purpose whatsoever in all of Nature. The evolutionary process has no purpose or direction. Everything continues mechanically forever, without intention, always randomly.

This one is the worst of the worst. Can one think of something as absurd as believing that Nature was created for NOTHING? This can only happen in the feverish minds of the pigs of materialism. What do these ignorant people know about the SUPREME INTELLIGENCE or UNMANIFESTED AIN OF THE KABBALAH? WHAT DO THEY KNOW ABOUT THE MULTIDIMENSIONALITY OF SPACE? These individuals don’t know that behind all “apparent mechanics” there is always a mechanic, and that mechanic is none other than the Theomegalogos. But what do they know about that?

6. Biological inheritance is material: Everything we inherit is material, it comes from genes or epigenetic modifications.

The science of the Antichrist ignores one hundred percent the existence of the INTELLIGENCES OF FIRE and, therefore, it does not know that beyond the atom, beyond the protons, neutrons and electrons, are the ASHIMS ─intelligences of fire─, which are responsible for establishing genetics in accordance with the Law of Karma. However, you cannot ask a donkey to speak English… As if that were not enough, today we already talk about QUANTA and NEUTRINOS, etc., etc., etc. What about that?

7. Memories are stored as material strokes:  All memory is stored in a specific place in the brain.

8. The mind is the brain: Every mental action exists only in the brain. All our consciousness is the action of the brain and nothing else.

It seems impossible that there are still people who, well into the 21st century, consider the brain to be the architect of everything. It has already been shown thousands of times that beyond the brain there is the mind. The mind is energy, the brain is cellular. The brain receives impulses from the mind. The mind can travel through time, as Jules Verne already demonstrated with his works TWENTY THOUSAND LEAGUES UNDER THE SEA, in which he was before his time with regards to the creation of the submersibles, or that other titled FROM THE EARTH TO THE MOON, in which the writer narrates man’s journey to our satellite and much of his data about the structure of the latter were verified by NASA. What do these blind guides know about the INNER MIND and its ability to take us to ECSTASY, TO THE SUPREME SAMADHI? Enigmas, enigmas, enigmas…!!!

9. Telepathy and paranormal phenomena are illusory:  Our thoughts and intentions cannot have an effect at a distance. Since all mental action only exists in the brain, “intelligent” people know that it is not possible for a mental action to be transmitted outside of the brain.

This statement takes us back to the time when Eusapia Paladino had to demonstrate to scientists from different places the possibility of seeing ECTOPLASMA as the energy that allowed to capture the image of a deceased. But, as if that were not enough, in Russia there have been many experiments in which TELEKINESIS was demonstrated, or the ability to move objects with the power of mental energy.  What is going on with the so-called science? Why is it suffering from so much MEDIOCRITY? Until recently it was claimed that the only planet that had life in our solar system was Earth, now they continually discover other planets that could harbor life exactly like the variety presented by our world. It was also stated outright that THE MOON WAS ONLY A CORPSE and a few days ago international news showed the world that the Moon has FROZEN WATER at the poles and other craters of it. The same was said about Mars: that it was inhospitable, that it had no water…, and then it was found that at the poles of Mars there is the liquid element and it was suspected that there could be an underground civilization that brought water to the equator of the planet.

10. Only mechanistic medicine works:  Only allopathic medicine, based on physics and known chemistry, works. Alternative therapies, homeopathic medicine and other treatments of this style are only placebo.

Materialistic physicians, based on their love for money and not for humanity, are trying to eliminate, by any means, every medicine that does not obey their pseudoscientific patterns. We Gnostics have formulas to CURE CANCER and many other diseases that “false science” considers incurable. Thousands and thousands of people have been cured through homeopathy. Allopathic medicine should serve as entertainment in circuses, because when we read the side effects of many medicines, we are terrified of what can happen to us if we consume them; in this way, at the end of the day, THE REMEDY TURNS OUT TO BE WORSE THAN THE DISEASE. These medications are so absurd that, while they make you feel a temporary, momentary calm, at the same time they are destroying platelets, altering the liver, creating nervous problems, causing itching and thousands of other somatic typologies.

Now we finish, appreciated readers, with a few sentences for reflection:

“The proud devours himself.”
Shakespeare

“Ingratitude is the daughter of pride.”
Cervantes

“By pause and pomp the proud is discovered”.
Friar Christopher of Fonseca

“It’s easier to write against pride than to overcome it.”
Quevedo

“Pride is the vice for which men want honors that are not attributable to them.”
Ramon Llull

I now cite a few words for you from this eminent scientist, Rupert Sheldrake: