VOPUS Gnosis > Articles > The Virgin of the rocks 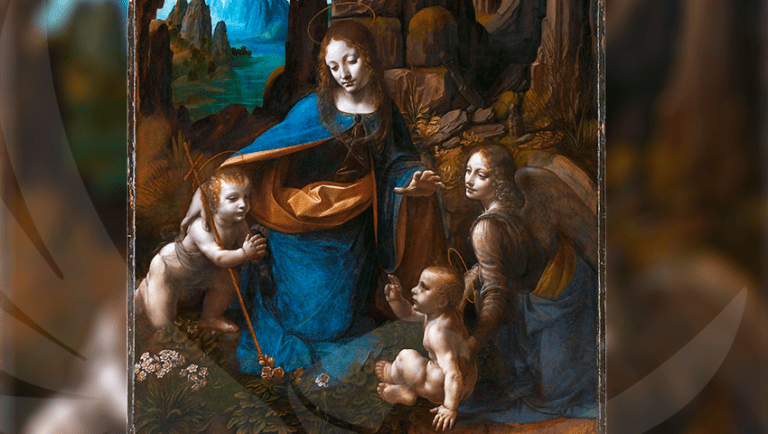 Continuing with our desire to send you extraordinary esoteric explanations about the paintings of the great Master Leonardo da Vinci, I am now pleased to give you information about this other one that scholars have wanted to call…

…The Virgin of the Rocks

The Virgin of the Rocks is a name used to denominate two paintings by Leonardo da Vinci painted with the identical pictorial technique of oil on panel.

“This masterpiece is one of the main paintings present in the Louvre. Elaborated by Leonardo da Vinci and the Predis brothers, Evangelista and Ambrogio, it was commissioned in 1483 by the Franciscan Confraternity of the Immaculate Conception to decorate a chapel in the church of San Francesco the Great in Milan. This oil on panel was intended to occupy the central place of a triptych –the other two artists painted the sides of the triptych, the author of the centerpiece is Leonardo–.

There is another version of the panel, made 20 years later, exhibited at the National Gallery in London. This second painting, found in the mentioned chapel of the Confraternity, confirms that the first panel was not accepted and is said to never have been exhibited. In this second version the identity of the two children is highlighted: an aura is added over the head of Jesus and a cross in the hands of St. John the Baptist. The hand of the archangel who pointed to St. John the Baptist also disappears.”

Now, both paintings represent transcendental things on a mystical and alchemical level. We must begin by saying that in both works Leonardo wanted to emphasize that the mystery of the incarnation of the child Christ is gestated in the bowels of the rock of supra-sexuality…, all of which we have come to understand thanks to the Samaelian teachings, or Gnostic teachings of the Avatar of Aquarius.

In both paintings these rocky caverns stand out, as an allusion to the mystery that sacred sexuality encloses, which was always symbolized by the stone. Let us remember those words of the Christian Gospel:

“Thus, everyone who hears the words I have just said and puts them into practice can compare himself to a sensible man who built his house on rock [sex]. The rains fell, the torrents rushed, the winds blew and shook the house; but it did not collapse, for it was built on rock [namely: sex].

On the contrary, he who hears my words and does not practice them can be compared to a foolish man, who built his house on sand. The rains fell, the torrents rushed, the winds blew and shook the house: it collapsed and its ruin was great.”

It is interesting to see in both oil paintings the representation of the blessed Ram-IO, or Mary, Marah or whatever we want to call her, a living allusion to our most sacred Mother Kundalini, who is actually the one who guides all the processes of the Adept until reaching Mastery.

The color of Her clothing on the first canvas is black. This is an allusion to the immense need to DIE psychologically so that we can reach the miracle of the incarnation of the intimate Christ. This Christ appears in both paintings accompanied by John the Baptist –another Christ– who carries a small cross with him.

In the first oil painting, the angel Uriel –the Logos of Love– points to John the Baptist and, on the other hand, John the Baptist recognizes in the other child the future Kabir of Galilee, which is why he is sort of making a plea and venerating him, because he knew that he would be the precursor of Jesus, but then the Nazarene would complete the work that humanity should know.

It is good to see that if John the Baptist carries the cross, the infant Jesus carries on his head an aura that qualifies him as Messiah.

On the chest of God Mother, on the second canvas, the Star of David seems to be drawn, symbol of the union of the two natures: the divine and the human. But we also cannot forget that she belonged, like Joseph, her husband, to the lineage of King David.

Already in the second oil painting the archangel Uriel does not point to John the Baptist, and the blessed Mother Goddess of the world is seen as if wanting to embrace the second, because remember that tradition says that, John the Baptist having been left orphaned, Mary chose to adopt him. This shows the IMMENSE LOVE that Devi-Kundalini professes to all Adepts of all categories. Both in the first painting and in the second She, the Most Sacred Virgin, wears a mantle that is gold colored on the inside, because it is She who purifies the Initiates and fabricates for them the bodies of gold or solar bodies, called To Soma Heliakon in the Greek Gnostic mysteries.

It is also good to point out that, in the second representation of this pictorial work, one of the stones that we see behind the Divine Mother stands out assuming the phallic form, as if to imply that only alchemical transmutation allows these divine mutations or miracles of celestial transcendence.

We finally add that, in the second canvas, the sacred robe of Stella Maris is a bluish color, in clear allusion to the fact that She is the Queen of the Heavens or supra-dimensions of space.

Equally important is the fact of highlighting that, in the second pictorial work, Leonardo wanted to point out that all the inner work can be done only with the help of the genesiac waters or primordial waters that we must never lose, in any way. These waters are shown in the background of the canvas as a fundamental framing of this magnificent work.

On the other hand, I consider that, alchemy being such a transcendental topic and so exhaustively dealt with by the great Masters of the Ars Magna, the words of an Adept like Fulcanelli are appropriate on the topic of the Virgin of the Rock or Virgin of the Stone, let’s see:

In The Conversation between Eudoxus and Pyrophile, which serves as a commentary to this treatise, Limojon Saint-Didier writes about this passage:

“The woman who is appropriate for the stone and who must be united to it is the fountain of living water, whose source, entirely heavenly, and particularly which has its center inthe sun and the moon, produces this clear and precious stream of the Sages, which flowsinto the sea of philosophers that surrounds the whole world. It is not without foundationthat this divine fountain is called by the author the wife of the stone: some haverepresented it in the form of a celestial nymph; others gave it the name of the chaste Diana, whose purity and virginity were not soiled by the spiritual connection uniting herto the stone. In a word, this magnetic conjunction is the magical marriage of earth with heaven, about which some philosophers have spoken; so that the second source of thephysical tincture which operates such wonders takes its birth from this all mysteriousmarital union”.

Extract from The Dwellings of the Philosophers, byV.M. Fulcanelli.

Here, I would like to add a few sentences inherent to these sacred mysteries:

“To know and to know how to demonstrate is to know twice.”
Gracián

“The first step toward wisdom is to free yourself from foolishness.”
Horacio

“The advantage of knowledge lies in being able to choose the line of the greatest advantage instead of following the direction of the least effort.”
Bernard Shaw

“It is not enough to acquire science, it is also necessary to use it.”
Cicero

“Knowledge is the most considerable part of happiness.”
Sophocles