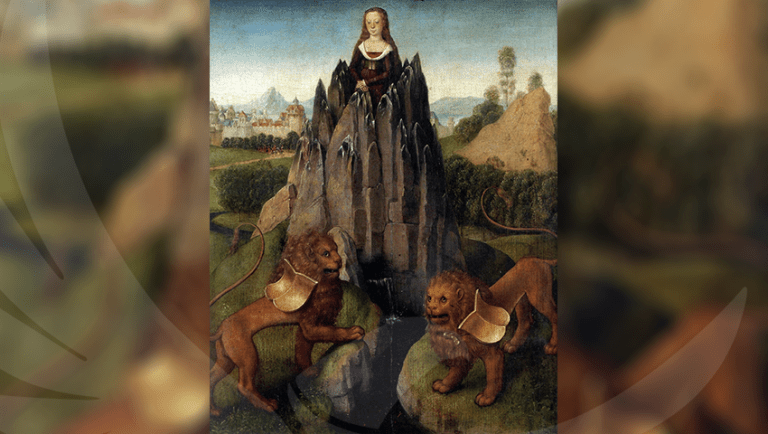 I take up the pen again to write to you once more, and on this occasion to mention to you some details of this work of art entitled Allegory of the Virgin or Allegory of Chastity.

This work was made between 1479 and 1480 by a painter named Hans Memling, belonging to the Flemish pictorial school although his true nationality was German.

Actually, dear reader, this canvas or painting is absolutely alchemical. Let us remember that at this time it was the Middle Ages and many masters of art dedicated their works to highlighting the details and spiritual achievements related to the transmutatory art.

It is interesting to see the Divine Lady emerging from within a huge rock whose tips look like tongues of fire. We must not forget that Stella Maris IS OUR DIVINE MOTHER KUNDALINI, who, by means of the work with superior sexuality, must awaken as a Sacred Fire that will have to destroy all our psychological aggregates and create, at the same time, rich inner life in our occult anatomy. That is the miracle of working in the mysteries of the hard rock.

There are in this work two lions bearing golden shields. Such lions allegorize the green lion and the red lion, vivid allusions to Mercury in its preparatory phase and later totally linked to the sulfur of the sages, that is, to the Sacred Fire.

Note in the upper left part, the castle that appears in the work. Such a castle is the dwelling of the BEING, which is promised to all those who have been redeemed by their works of mystical death and inner birth.

The golden shields of both lions symbolize the alchemical Gold, which the alchemist has to accumulate in his constant work with supra-sexuality.

On the other hand, the words of our Avatar ─V.M. Samael─ come to life when contemplating the symbology enclosed in this work of art, let us see:

“Peter, Patar, the great Hierophant, said, ‘Behold, I lay in Zion the fundamental cornerstone, chosen, precious; and whoever believes in it will not be defeated For you, those who believe, it is precious, but for those who do not believe, the Stone which the builders rejected has become the chief cornerstone, a stone of stumbling and a rock of offense.”

Here, the mysteries of secret sexuality are enclosed. This is, precisely, sex, my dear brothers; a stone of stumbling and rock of offense, you know it… One has to CARVE THE STONE, THE HARD ROCK, UNTIL IT IS CHISELED.”

Very important is also the stream that runs through the stone. That is the stream of the sages, the lustral water in which the Secret Fire is contained.

Fulcanelli, the great Adept, tells us about this Virgin and this stream in the following words:

“In Entretien d’Eudoxe et de Pyrophile, which serves as a commentary to this treatise, Limojon Saint-Didier writes about this passage: “The woman who is appropriate for the stone and who must be united to it is the fountain of living water, whose source, entirely heavenly, and particularly which has its center in the Sun and the Moon, produces this clear and precious stream of the Sages, which flows into the sea of philosophers that surrounds the whole world. It is not without foundation that this divine fountain is called by the author the wife of the stone. Some have represented it in the form of a celestial nymph, others gave it the name of the chaste Diana, whose purity and virginity were not soiled by the spiritual connection uniting her to the stone. In a word, this magnetic conjunction is the magical marriage of earth with heaven, about which some philosophers have spoken; so that the second source of the physical tincture which operates such wonders takes its birth from this all mysterious marital union”.

─Excerpt from the work The dwellings of the philosophers, by the V.M. Fulcanelli─.

I now add for you, dear friends, a few sentences that are well worth reflecting upon:

“Christianity has too often confused chastity with purity. True purity is that of love. A eunuch or seminarian may not be chaste at all; the smile of a betrothed can be infinitely more virginal than that of a nun.”
Jean-Marie Guyau

“Purity is like the opal, it is considered insignificant because its reflections are not seen.”
Carmen Silva

“Purity is only the first, and when it is lost it is lost forever.”
Concepción Arenal

“If chastity is not a virtue, it is, however, certainly a strength.”
Jules Renard