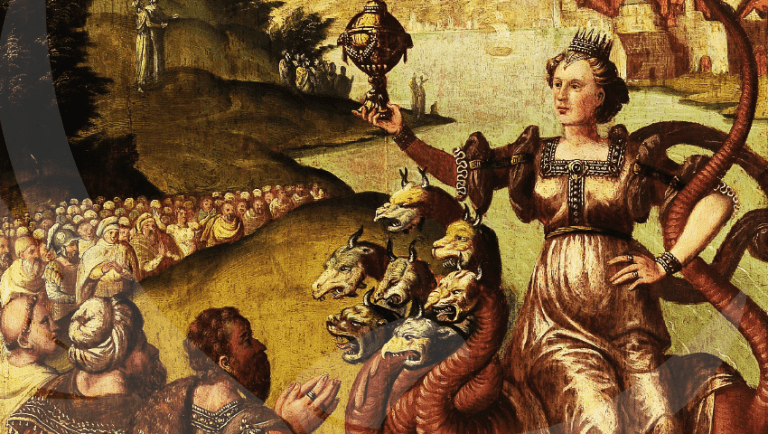 I send to all of you, with haste, the present message that deals with:

THE LABOR PAINS OF THE GREAT WHORE

Repeatedly, I have been sending you different messages alluding to the so-called END TIMES about which, in his time, M. Samael Aun Weor had already alerted us.

If we calmly observe via the news ─unofficial ones, because the official ones are ordered to keep quiet─, we will see that the whole planet is in crisis and the human pseudo-society that inhabits it as well.

Everywhere, absolutely everywhere, we will see that our world is certainly living its end, and the sleepy multitudes, seeing what is happening in many places on Earth, do not even ask themselves: “But what is this?, What happens to our world?, What are we living and what are we going to live?”, etc. , etc., etc.

The ancient inhabitants of the valley of Mexico, the Aztecs or Nahuas, left written on the famous Sun Stone or Aztec Calendar the prophecy according to which we, the children of the Fifth Sun, the inhabitants of the current Aryan Race, will be destroyed by the sign Ollin. Such a sign should be translated as FIRE AND MOVEMENT…..

It is precisely in these precarious times that we see that Africa is already splitting into two halves, the Arabian desert is receiving floods and in certain places trees and grasslands have begun to grow; in Vietnam, China, Singapore, Mongolia ─ that is, the Far East─ there are incessant earthquakes and floods, typhoons…; Russia is being hit by very violent hurricanes and floods; the United States is being attacked by very strong quakes, cyclones, hurricanes and very dangerous movements in California, especially near the gigantic volcano called YELLOWSTONE ─if that volcano decides to erupt it will create a tragedy that will affect half of the United States and part of Central America─; Mexico does not cease to tremble and it will soon be hit by an earthquake never seen before, so prophesied the Avatar of Aquarius when he said: ”This will happen after a strong accident occurring in the subway of Mexico City.” , this accident happened just recently and now we only have to wait for the GREAT QUAKE…

Guatemala, El Salvador, Nicaragua, Costa Rica, Colombia, are already threatened by volcanoes that have begun to spew fumaroles that precede the very serious eruptions; South America is being warned by nature about strong earthquakes and volcanoes ─like the one that has just woken up in Ecuador─; in Peru another volcano has just become active, the same happens in Bolivia and so on…

Europe is suffering from never-before-seen floods, as are places like Finland, New Zealand, Australia and many other corners of our afflicted world.

He who does not want to realize what is happening, even if he is contemplating it with his own eyes is plainly and simply a ROBOT THAT SUFFERS PSYCHIC DISORDERS CAUSED BY A COLLECTIVE HYPNOSIS in which the pseudo-human genre finds itself.

Beside all this geological panorama we must add the degradation that the masses of humanoids are suffering, a degradation never before seen. Such degradation is seen by the multitudes as the wonderful grace of a species that, according to them, knows how to take life calmly and with a strange joy.

To top it all off, some churches have authorized specific marriages and ceremonies for members of the LGBT collective. With this act those churches have signed their pact with the ANTICHRIST, as was predicted in the Book of Revelation by St. John: “Every knee shall bend before the Beast and venerate it”… This is now a fait accompli.

As if that were not enough, East and West are constantly threatening each other with monstrous atomic weapons and other warlike inventions typical of hellish nightmares, which only confirms another prophecy of the V.M. Samael when he said: “The Third World War will be inevitable and there will be millions of deaths as a result of it!” …

And the icing on this macabre cake arrives with the Covid pandemic, a disease caused by a virus created in a laboratory by the Machiavellianism of this Kali-Yuga and that, unfortunately, escaped from it, quickly spreading to the four cardinal points of our globe, totally changing the lifestyle we had before. There is no doubt that, right now, the great powers are fearing the worst, that is: THE BANKRUPTCY OF THEIR ECONOMIES, all of which must result in unemployment, class struggle, hunger, political confusion and, finally, WARS, WARS AND MORE WARS.

The V.M. Aberamentho himself warned his followers: “When you see strange signs in the heavens, and wars and rumors of wars everywhere, know that the day of the great apostasy has come!”, this is our daily bread in the present moments.

And what should we do, the lovers of Gnosis, who were already warned of all these catastrophes from the days when we listened to the Avatar of the Age of Aquarius at international Gnostic congresses warning us about all these evils?

ANSWER: We need, with unpostponable urgency, to surrender to the practices offered by the Fifth Truth! We urgently need to resort to prayer, to interiorization, to recollection! There is no more time to waste in in-fighting between the little brothers and sisters! That time is over! And the one who does not want to cling to THE MYSTICAL DEATH must know that he/she is already separated from the sheep and is now part of the flock of little goats! And due to this condition, he/she will have to live the misfortunes that are indicated by the divine Archons of the Great Law for this sick humanity!

I would like to add, as a final culmination of this message, a few words by Stephan Hoeller, who rightly comments on the vision that the champion of contemporary psychoanalysis had on today’s society, Dr. Carl Gustav Jung; here they are:

In theory, most religions also tend to assert a familiar attitude of internalism, however, as a result of their observance of the principles of society, in practice they end up denying it. In general, religions begin as movements of radical liberation with a certain spiritual orientation, and inevitably end up being a pillar of the very societies that are the jailers of our soul.

The extraverted human Ego must, first of all, be aware of its own alienation from the higher SELF [namely: the Real BEING], so as to be able to return to a state of intimate union with our intimacy. Until we truly realize that our extroverted state is inadequate and insufficient in relation to our deepest spiritual needs, we will not reach the slightest level of individualization; and it is precisely through it that a broader and more mature psychic structure will emerge.”

I add for you, as always, a few sentences that I consider important to reflect upon:

“The guilty party’s first punishment is that he can never be acquitted by the court of his conscience.”
Juvenal

“He who spits into heaven, on his face it shall land.”
Juan de Torres

“Work on preventing crimes so you don’t need punishment.”
Confucius

“Only the virtuous man can recognize the inevitable and remain immovable.”
Chuang-Tse