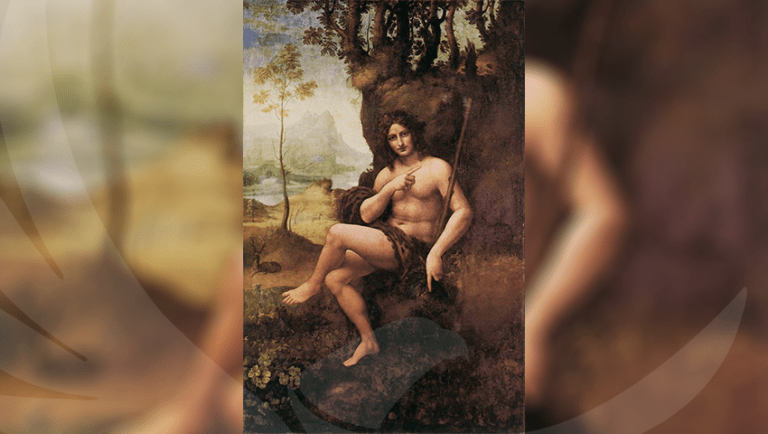 Continuing our research on the trajectory of the excellent painter Leonardo da Vinci, today, I send you some interesting things about…

To begin we will say that in the present pictorial work, the eminent Leonardo wanted to show us several details about the Roman God Bacchus, which was equivalent to the God PAN of the Greeks.

Both divinities were related by the ancients with wine and, likewise, with inebriation, dance, etc., especially those dances that were related to sexual mysteries. Let us remember the bacchantes of the rites in which precisely the Lord of Wine was venerated, that is: BACCHUS.

However, thanks to Gnosis it is easy for us to identify this divinity with the shadow of our intimate Christ, that is, with LUCIFER.

Millennial Gnosis has always known that LUCIFER is a very sacred autonomous and self-conscious part of our own BEING. The V.M. Samael has emphasized to us a thousand times that without the help of our intimate Lucifer it is more than impossible to carry out the Great Work within, that is, to Self-Realize.

BACCHUS, OR LUCIFER, gives us the erotic impulse that allows us to transmute our secret Mercury into light. Without the luciferic electrical impulse Sahaja Maithuna cannot be performed, or in other words, we cannot practice the sacred Arcanum A.Z.F. Very ancient Gnostic writings emphasize the idea that LUCIFER is, therefore, the minister of the Most High and they were not wrong. Today, through contemporary Samaelian Gnosticism, we can grasp these theological precisions that were rejected by those ancient Christians who wanted to modify the teachings of the Great Kabir of Galilee ─V.M. Aberamentho─ and that finally constituted what we know today as the Catholic Church…

Obviously, as long as we have not disintegrated the EGO our intimate Lucifer will be a creature that is not precisely in line with the beauty of this other that we see in this oil painting. On the contrary, the alchemists crudely depicted him as the Bafometo or Baphomet, a creature with legs, horns and the head of a goat that it was necessary to purify. The way to purify it was, precisely, using the fire it showed between its two horns, which would put into action the five-pointed star that shone on its forehead ─namely: the BEING─. Friends, the intimate Lucifer can only be purified by the death of the “I” and the sublimation of our sexual secretions during the practice of the sacred Arcanum.

The day we purify our INNER BACCHUS then he will give us the keys of heaven and earth, for he becomes the spokesman of the Immutable One, our Father who is in secret. The Catholic clergy made a very serious mistake by anathematizing the double of the intimate Christ, throwing all kinds of insults at him, while they always associated him and continue to associate him with Satan, which is something absolutely erroneous. We have to say that the BACCHUS that Master Leonardo shows us is the representation of the Baphomet that has been whitened thanks to the particular, individual, inner work, putting into action the three factors of the Revolution of Consciousness. Ancient Christian rites mentioned the Great Kabir ─V.M. Aberamentho─ as CHRESTOS LUCIFER.

Such is the reason why the brilliant painter has depicted him as a very handsome young man, carrying in his left hand a staff that he points at with his right hand. This, in turn, points indirectly upward as well.

Interesting it is to see Bacchus with his left hand pointing downward. This play of hands is telling us: with me –namely: with Lucifer– you go up –namely: toward the heavens of Consciousness– or you go down –to the hells or infra-dimensions of nature– as explained to us by the V.M. Samael Aun Weor in his work Yes there is hell, yes there is Devil, yes there is Karma. That is why, the V.M. Dante Alighieri went down to the infernos using the back of Lucifer and then ascended to the Kingdom of Light using the spine of Lucifer again as a ladder to climb up. That is the double edge of sexual energy: if we transmute it we become beings of light; if we lose it in fornications, masturbations, etc., etc., etc., we become demons.

The Staff of this divinity symbolizes the spine of the knower of the Hermetic Path, because in it our animic advance is reflected. It is good to emphasize that in the final part of this staff –in the lower part of it– there is a bunch of grapes, an allegory of the seed with which the wine is made. It is worth noting in this paragraph that in the upper part of the staff buds are seen, allowing us to understand that the work in the Forge of Vulcan, well done, will sooner or later bear fruit.

It is also interesting to see – although it is not easy – a crown of branches on the head of the God Bacchus. On the other hand, the fact of seeing this divinity covered with a panther skin is telling us about the very symbol of fire, because, unlike the lambskin, the panther skin represents the very active forces of the element fire.

We can also see, on one side of this painting, a deer with an antler. This animal is there to symbolize the tamed fire, transformed into material and spiritual beauty. Likewise, we see a tree representative of our profound inner Real Being.

It is good to add that there are absolutely mind-boggling comments about Leonardo and the young man who, supposedly, was the model for the two paintings called John the Baptist and Bacchus. The young man’s name was Gian Giacomo Caprotti da Oreno, also known as Leonardo de Salai, and he came to da Vinci’s studio in Milan, becoming an apprentice. Because of his admirable beauty he has been the subject of inspiration for the Grand Master. But the perverse intellect of historians goes as far as to assume things like that he has been the hidden love of Leonardo, all of which is mind-boggling and totally out of place.

To conclude, I am adding a few sentences destined to be reflected upon:

“The whole earth is the mausoleum of illustrious men.”
Pericles

“The appreciation of our contemporaries is a more real good than the admiration of posterity.”
Napoleon

“He ne’er is crowned with immortality who fears to follow where airy voices lead.”
Keats

“The good name is better than the many riches.”
Cervantes