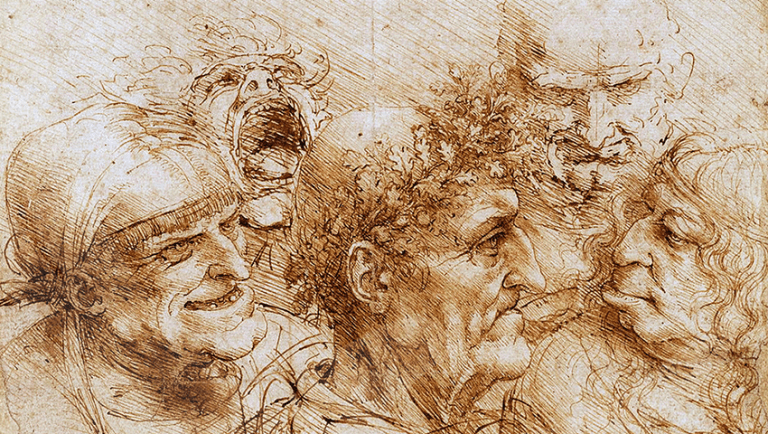 I want to share with you some sketches made by the great Master Leonardo da Vinci that, as always, have not been understood by intellectualoid scholars who have wanted to explain the reason for such images.

It is considered, according to them, that Leonardo was obsessed with human heads and that he was able to follow someone to observe the head as best as possible and then return to his studio where he reproduced such biological morphologies. However, this is absolutely stupid in the light of hermetic esotericism.

What we do have to deduce from these sketches is that they are observations of states produced by the “I” in people. We must not forget that Leonardo was quite a clairvoyant and this allowed him to see the animal-like states of the rational humanoid. It is also commented that, in several cases, Leonardo da Vinci wrote some comments right next to some of these deformed heads and that he did so with his left hand and writing the text backwards, that is to say, to understand it it was necessary to read it with the help of a mirror.

All these concomitances lead us to the conclusion according to which Master Leonardo tried to make us see the counterpart of what we believe we are and what we carry inside, that is, the psychological aggregates. Hence all those grotesque forms that this enlightened painter captured in his various pictorial works.

The title of this study made by Leonardo is that of…

When we observe all these figures we can see in them the expression of gluttony, pride, anger and, in general, the disorder that the rational animal carries inside. Below you can observe the strange texts that the great Master Leonardo left to posterity and that were written with his left hand and backwards:

On the other hand, friends, a scholar of Leonardo’s work has said this:

“Official historians say about the drawing below:

“Among Leonardo’s numerous figure grottesche are these five grotesque heads drawn on a large folio preserved in the Royal Library of Windsor Castle. There are five faces in which the various characters are represented. The center is occupied by a classical profile of a man with a garland of holm oak leaves; around him, four faces, some are mere grimaces, in which the four temperaments are represented: sanguine, choleric, melancholic and phlegmatic”.

But, in reality, the Venerable Leonardo did not try to show sanguine, choleric, melancholic and phlegmatic temperaments, no, because he was above all a clairvoyant, an awakened Master and not some cheap doctor like those that abound in our days.

What did surprise this great painter were those grotesque things that the human being carried inside, that is another thing. For us, those who love Gnosis, to be able to contemplate our miseries embodied in these sketches is surprising and interesting, because whenever we talk about the ANIMAL EGO we would never imagine that such energies would possess such ugliness….. In the center of these five heads shown below, Leonardo da Vinci placed a normal head crowned by laurels so that we could appreciate the difference between a balanced, normal person and the other expressions of the degenerate psyche. Quite a teaching. Very few people understood and many others still do not understand this great Adept.

I add now a few sentences for your reflection:

“Every day we should listen to a small song, read a good poetic composition, contemplate an excellent painting and, if possible, say some reasonable words.”
Goethe

“Resolve to follow the most excellent behavior and, out of habit, you will delight in it.”
Pythagoras

“Every man must propose to do only that which, being useful to himself, is also useful to all men.”
Cicero

“Man’s virtue should not be measured by his efforts but by his ordinary conduct.”
Pascal

“Always act in such a way that your conduct could serve as a principle to a universal law.”
Kant

BARBA ET PALLIUM, PHILOSOPHUM NONDUM VIDEO.
─‘I see a beard and a cloak, but I do not see any philosopher yet’─.
KWEN KHAN KHU