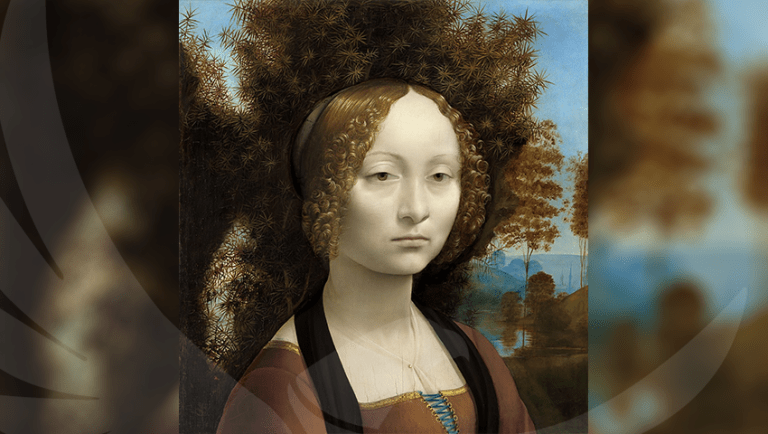 I am writing to all of you to make a few comments on another of the extraordinary works attributed to Master Leonardo da Vinci, which has been entitled as…

First of all, let us point out that the face of this woman is deeply enigmatic, especially if we observe in it her eyes and her mouth. Her eyes tell us of being divorced from the Mayavic world. Her lips express a silence proper to the liberated Spirits.

Let us get into some necessary considerations that we must take into account historically:

Many comment on the trees behind this silhouette, which are junipers. Such a name given to these trees in the Italian language is pronounced [ginepros], and for this reason this name is associated phonetically with the word Ginevra.

Esoterically, dear reader, we are looking at a representation of the Guinevere or Divine Soul that every man and woman carries inside, in our animic depths.

On one side of this enigmatic lady we see, as always, the alchemical waters that, normally, Leonardo da Vinci always wanted to show in all his works, as a Master of the transmutatory art to which he was always associated.

The hair of this reflective lady is like a cascade of gold, for she synthesizes the perfection of the works in the laboratory and of the absolute death in the Initiates. We could say emphatically that, in the case of this canvas, Leonardo da Vinci wanted to refer directly to the Wet Path, which is chosen by those who aspire to rest in the nirvanic spheres.

It is necessary to know, dear friends, that there is an emblem on the back of this painting consisting of a laurel branch that intersects with a palm branch. Both contain a motto that is written in Latin:  virtutem forma decorat, which translated means ‘beauty is the ornament of virtue’. Clearly, what makes the soul beautiful are precisely the various virtues that it can manifest and that are, ultimately, like precious gems that adorn it.

Unfortunately, we have to say that the lower part of this pictorial work, for reasons unknown to us, was cut, and therefore it is assumed that the sketch that you see in the final part from top to bottom, in which some hands are can be seen, is attributed to this same painting.

When we observe those hands we can see that they intersect and the right hand, specifically, points to that part of our body in which the true Kabbalah locates that Sephiroth that Gnostically we call Tiphereth. This Sephiroth corresponds in our body precisely with that area of our body that we call the chest, because let us not forget that, finally, we the lovers of Gnosis aspire to develop our Sacred Fires in order to be united with our causal body, the place where we have to locate this area that we are pointing out with this name:  Tiphereth… It is very sad, patient reader, to know that all these transcendental works of the geniuses of antiquity today are interpreted capriciously by the sleeping Consciousness of the intellectualoids, and in their assertions true absurdities are poured, that have nothing to do with the purpose that originally led the artist to create them.

I give you now a few sentences to be reflected:

“Painting surpasses music in excellence and lordship, because it does not die after having given birth to its creations as it happens to the unfortunate music. Painting, on the contrary, prolongs its existence by showing us all its vitality on a simple surface.”
Leonardo da Vinci

«The poet achieves his effects thanks to the succession of images; the painter by means of their simultaneity”.
Delacroix

“History, poetry, and painting symbolize each other mutually and are so similar that, when you write history, you paint, and when you paint, you compose.”
Cervantes

“Telling the painter that nature should be taken as it is is like telling the pianist that he can sit on the piano.”
J. McN. Whistler