VOPUS Gnosis > Articles > Allegory with a dog and an eagle 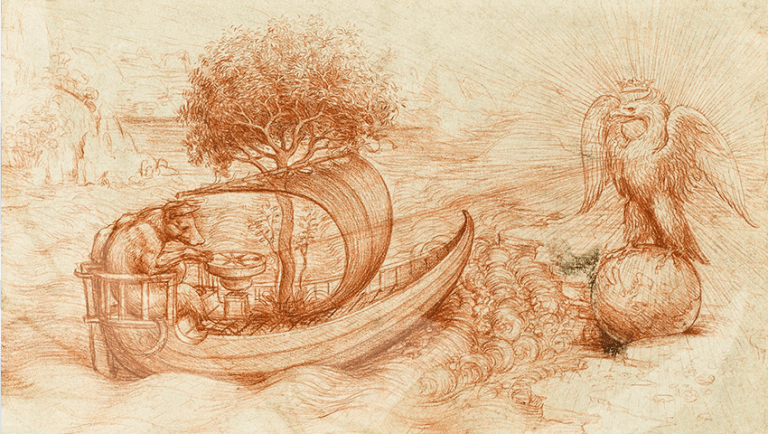 I hasten to send you another work of the genius painter that history remembers under the name of Leonardo da Vinci. This work was baptized with the name of:

ALLEGORY WITH A DOG AND AN EAGLE

Undoubtedly, it is an oil painting absolutely linked to the hermetic tradition of Alchemy.

As always, unfortunately, intellectualoids make really absurd comments on this genius work. Sometimes they say that this was a representation of the authority of Pope such-and-such, confronted with this or that kingdom. However, the crude reality of this work points to something extraordinary for those of us who love Gnosis and practice transmutatory art…

First of all, it is good to point out something unusual and it is to see a dog that is steering a boat and is marking a course through a compass to where there is an extraordinary eagle that, majestically, is standing on a sphere that represents a world.

It is important to comment, within this context, that, likewise, the compass in this drawing of Master Leonardo represents the permanent state of self-observation of the Adept in order to achieve the long-awaited alliance of the two natures: Sulfur and Mercury. On the other hand, this compass represents the urgent need to keep our longings alive on this hard path so as to one day integrate with our INNER BEING. The force of the longings allows us not to succumb to the entropy that our secret enemy THE “I” will always set in motion.

First, let us observe that the two animals are the protagonists of what we esoterically have to call THE GREAT INNER WORK. The dog would be here the volatile element –the Mercury of the wise–and the eagle comes to represent the fixed element –Sulfur–.  However, we must emphasize that in this case this eagle has not been conceived only to indicate to us the Sulfur ─the fire─, but it is in this case the divine Sulfur or the fire of Stella Maris. That is, we see here the Sulfur purified of its impurities –animal desires–and this is the reason why this eagle appears crowned.

It is very interesting to see the dog steering a boat ─which symbolizes marriage─, carrying in the middle of it a tree, a vivid allusion to the tree of the science of good and evil ─namely: sexuality─.

Unquestionably, it is paradoxical to see a tree sprout from a boat, but it is the hermetic symbolism that the Masters of the Ars Magna used to leave to posterity…

It is necessary to emphasize that the eagle of our theme, in addition to representing the Sacred Fire, wears a royal crown on its head, because the fire it represents is the sacrosanct fire of the very Holy Spirit. The globe on which our bird is perched is the mercurial chaos, the fundamental basis of all the works that will lead us to obtain the Philosopher’s Stone.

Equally interesting is the fact of seeing that, as we have already mentioned, the dog directs the boat with the help of a compass and an exchange of rays between the dog and the eagle is seen, as if the one who steers the boat and the eagle itself were destined to meet. In fact, if we observe carefully, we can easily grasp that one of those multiple rays in this image is indicating to the symbolic dog where it has to go, which is nothing else than the famous conjunction of both titans –Sulfur and Mercury–. It is obvious that the compass that the boat has represents the Consciousness of the Adept so as not to get lost in this Hermetic Path full of dangers on the inside and on the outside. That is why a main ray shoots out from the allegorical eagle until it touches the hands of the compass.

There is no doubt that the whole scene takes place on the waters of the sea of bronze, that is, thanks to our genesiac or alchemical waters. And at the bottom of it all we are being told that the Great Inner Work can only be done by working with the tree of good and evil —sexuality–.

Curiously, the eagle represented here is exalted by many rays that we see around it, because we can only be purified with the help of the Divine Fire that has to destroy our multiple psychological aggregates –“I’s” of psychology– and at the same time create our atomic vehicles to have reality in the superior worlds of Consciousness.

I consider, dear friends, that having arrived here it is good to add a few words of the great Adept FULCANELLI on these tasks, let us see:

“The Greek word by which the oar was designated simultaneously proposes the meaning of vessel and of winnowing basket. The latter is a kind of wicker shell attributed to Mercury and which the Kabbalist writes “vent” [wind]. This is why the Emerald Tablet, speaking of the stone, allegorically conveys that “the wind carried it in its belly”. This winnowing basket is none other than the womb, the vessel carrier of the stone, the emblem of mercury and principal subject of our bas-relief […]. All these symbols evidently converge, as is seen, towards one and the same object, also indicated by the small dog positioned on top of the small helmet, whose special meaning (head, summit) marks the important part in this case, the culminating point of the Art, the key to the Great Work.”

“As for the symbolic dog, direct successor of the Egyptian cynocephalus, the philosopher Artephius has granted it civil rights among the figures of alchemical iconography. Indeed, he speaks of the dog of Khorassan and of the bitch of Armenia, emblems of the sulphur and the mercury, parents of the Stone.”

“These two (which Avicenna calls Bitch of Khorassan and Dog of Armenia), being then united in the vessel of the sepulcher, bite each other cruelly and through their great venom and furious rage never leave each other from the moment they have grabbed each other. They are the two sperms, masculine and feminine, described at the beginning of my Philosophical Rosary which are engendered (says Rasis, Avicenna, and Abraham the Jew) in the kidneys, entrails, and from the operations of the four elements.”

The Adept Fulcanelli himself rightly said:

“One must always carefully watch the ship’s orientation, maneuver with prudence, watch out for the gusts of wind, foresee the storm [namely: the animal passions], be constantly on the alert, avoid the abyss of Charybdus and the reef of Scylla, fight unceasingly, night and day, against the roughness of the sea.”

So, dear reader, let us look again at the amazing ability of the V.M. Leonardo da Vinci to summarize in a pictorial work one of the great mysteries of transmutatory art.

Let me now add to all these pages some sentences that I consider interesting:

“The nobility of man proceeds from virtue, not from birth.”
Epictetus

“If nobility is the daughter of virtue, very often it has killed its mother.”
Voltaire

“Noble can be called the one who by nature is inclined to virtue.”
Seneca