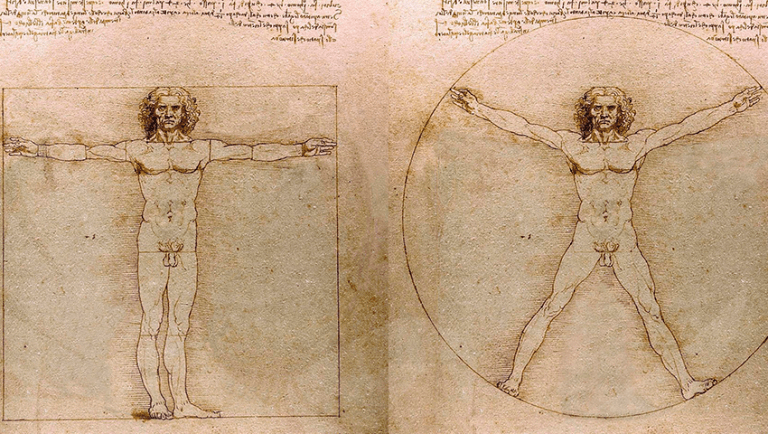 I am very pleased to send us a few words again, this time in relation to another pictorial work by the famous Leonardo da Vinci. This oil painting has historically been called:

For Leonardo it symbolized the mathematical proportion of the universe, because in truth the model taken by the creator of the universe was man himself, image and likeness of Himself. Hence transcendental occultism asserts that all the laws of the macrocosm are contained, summarized, in the earthly man, all of which is a great truth. That is why we can say, accompanying the Gnostic postulates and without that assertion having anything to do with fantasies or absurd ramblings of the mind, that once man is created within ourselves we can aspire to the Superman.

In order to understand this extraordinary canvas, we must, first of all, know that we are looking at two men, one superimposed on the other.

One of the two men is inside a square and the other touches with his hands and feet a circle representative of eternity. There would be, thus, shown the earthly man and the divine Superman.

There is one man that we could clearly observe performing with his body the famous Tau cross of the Gnostic mysteries, while the other, with his legs and arms open, forms a star. The latter constitutes  the self-realized man, the Superman. When the true Man —not the earthly humanoid— becomes Superman, it is clear that he shines in space like a star because he is connected to the inner star that has always smiled upon him —namely:  the BEING—.

Note in these engravings both men separated from each other.

Notice now down here the star man or Pentalfa man, that is, the Superman.

In this other engraving shown below, we can see that he is absolutely, mathematically, conceived proportionally.

The point at which the vertical and horizontal lines coincide is precisely the sex of the figure, to indicate that the path that separates the humanoid from Man and Man himself from the Superman is none other than the way we use sexuality. As our Avatar well said: from the human state angels or demons, eagles or reptiles will have to emerge, and the battle will always be fought with regard to sexuality… We all know that sex is that stumbling stone and a rock of offence to which Paul of Tarsus, the apostle, always referred.

We now enter into considerations regarding the universal swastika. We say that it has a universal character because, although people always associate this cross with Nazism, the harsh truth is that it was already used many millennia earlier in Tibet and in India and their mythologies, as well as in the pre-Hispanic cultures of South America.

There are two types of swastikas or crosses in motion, namely:  the dextrorotatory and the levorotatory The first is associated in the mysteries with the destruction of the “I”; the second to the generation of the inner life. One represents, speaking from the point of view of materialism,  the  self-destruction of man; the  other points to the search for the horizontality of our life. It is important, therefore, to try to appreciate that in the dextrorotatory one ─from the viewpoint of the Vitruvian man himself─ the alchemical word solve appears,which translated into the language of the Ars Magna ─namely: Alchemy─ means to dissolve the crude mercury, the “I”. The levorotatory ─again from the viewpoint of the Vitruvian man himself─is accompanied by the word coagula, which, Gnostically speaking, means to coagulate the sulfurous mercury, in other words, the alchemical gold, in order to get to have our atomic vehicles or sidereal bodies with which we can move in the superior dimensions of space.

In the graph below we can see that Leonardo da Vinci wanted to point out in a direct and precise manner that in sexuality resides the fire that destroys or builds an occult anatomy. Therefore what looks like flames can be seen around these genital organs of the figure.

I now continue, by writing to you, brothers and sisters, some sentences that I consider interesting to reflected upon:

“All art is imitation of nature.”
Seneca

“Art is a compendium of nature formed by imagination.”
Eça de Queirós

“The agitation of art is natural and healthy, and the soul that feels it suffers more from containing it than from giving it an outlet.”
Jose Marti

”To reveal art and conceal the artist is art’s aim.”
Oscar Wilde