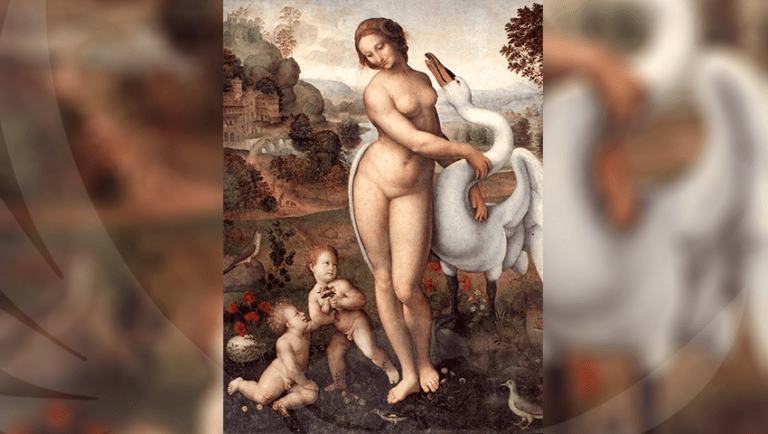 …THE MYSTERY ENCLOSED IN THE FIGURES OF LEDA AND THE SWAN

To begin this unveiling, it is good to say to all our men and women companions that in this myth is enclosed a beautiful alchemical mystery that is possible to decipher with the help of Gnosis.

For anyone who has read about mythology, it is no secret that the mythological god Zeus many times transformed himself into various creatures in order to achieve his goal, which was none other than to fecundate certain kinds of virgins or the blessed Mother Goddess. This mythical quality of the god Zeus alludes to the powerful metamorphosis of the ray of the Common Cosmic Eternal Father that passes through everything from His exit from the Absolute Abstract Space and He is incessantly fecundating the cosmic womb.

Now, for those of us who love the Secret Path and appreciate everything related to the Ars Magna of Alchemy, the words of the great Adept Fulcanelli around this part of Greek mythology become like the pure water of a spring that helps us quench our thirst for transcendental knowledge, let’s see:

“This beautiful bird, whose wings are symbolic of volatility, and whose snowy whiteness is the expression of purity, possesses the two essential qualities of the initial mercury or our dissolving water. We know that it must be vanquished by the sulfur –issuing from its own substance, which it has itself generated– so as to obtain, after its death, that partly fixed, partly volatile philosophical mercury, which the subsequent maturation will raise to the degree of perfection of the great elixir. All authors teach that the living must be killed if the dead is to be resurrected. This is why the good artist will not hesitate to sacrifice the bird of Hermes and to initiate the mutation of its mercurial properties into sulfurous qualities, since any transformation remains subject to a preliminary decomposition and cannot be completed without it. Basil Valentine states that “the twofold fiery man must be fed a snowy swan”; and he adds: “then the swan roasted will become food for the King.”

─Extract from the work THE DWELLINGS OF THE PHILOSOPHERS by the great Master Fulcanelli─. This oil painting by Master Leonardo da Vinci, like others that he came to make, invites us to the fabrication of the Stone of splendors ─namely: the Philosopher’s Stone─, and therefore the two primordial materials that constitute the basis of the procedures to conquer the Great Work are reflected, namely: the fixed matter ─the Virgin─ and the volatile matter ─the swan─, which will end up fusing into one to become the Sulfurous Mercury or Mercurial Sulfur. Such is the mythological betrothal enclosed in the matrimony of Leda and the swan that, by the way, gave rise to the twins Castor and Pollux, which we see represented in the two children located in the lower left of the image, these finally end up being the Dioscuri or protectors of imperial Rome.

In the canvas of Leonardo can be seen, in the lower and left part of it, an egg that has not yet hatched. It is therefore good to know that, mythologically, both Castor and Pollux came out from two eggs that the swan engendered. Thus, therefore, this unhatched egg means that the union of Leda —the original matter— with the swan —the philosophical fire— determines the birth of the three primary forces of creation.

Both near the infants and near Leda and the swan we appreciate the flowers representative of the virtues necessary for such a miracle to be operated in the inner nature of the devotee of the Secret Path.

Likewise, it is interesting that, once again, the artist ─Leonardo da Vinci─ reflects in his work the two alchemical paths, because behind the goddess Leda we see a sea ─the philosophical sea─ and on the left side of it there is a dry path or stony path, representative of the so-called Direct Path. This path leads toward a kind of mansion, which is none other than the abode of the BEING. And, as the Hermetic Path teaches, before reaching that abode we will have killed the inner Judas, a symbol of our aberrant psychological aggregates. Tradition tells us that the death of such an entity takes place on a stone bridge on which he must die beheaded. Such a bridge allegorizes the pains that the Adept must endure for eight —physical— years as the Patriarch Job did, in order to suffer the mystical leprosy that represents the abandonment of the flesh of sin —the flesh of Adam— to be clothed in the inner vehicles of pure gold or solar vehicles with which the victor of the great journey is clothed, vehicles with which the intimate Christ of the Adept sits on his throne to carry out the mission entrusted to him.

May I be allowed, dear reader, to now offer you some very appropriate sentences linked to this beautiful trajectory that contemporary Gnosticism offers us, let’s see:

“Live as if you hope to reach a hundred years, but as if you are ready to die tomorrow.”
Ann Lee

“What a relaxed life is that which flees the worldly clamor, and follows the hidden path down which have gone the few wise men there have been in the world.”
Friar Luis de León

“There are only three events in a man’s life; birth, life and death; he is not conscious of being born, he dies in pain and he forgets to live.”
La Bruyère

“If life were not taken as a mission, it would cease to be life and become hell.”
Leo Tolstoy