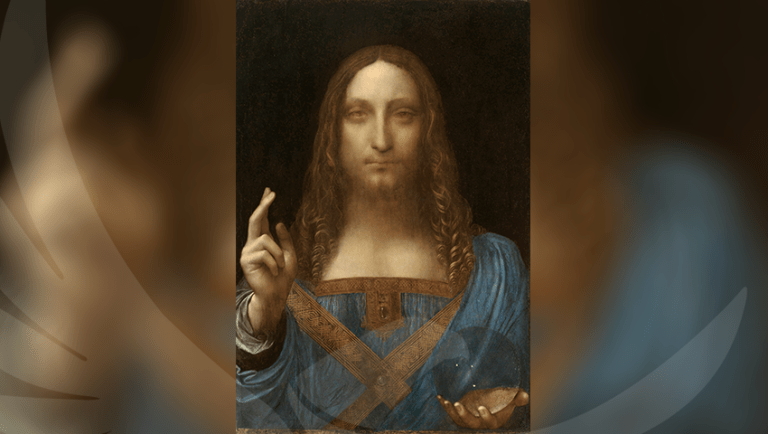 I am pleased to send you today the esoteric description of this magnificent oil painting attributed to the V.M. Leonardo da Vinci and which is entitled:

As on other occasions, Master Leonardo, who had already painted his own Divine Mother –the famous Mona Lisa– and thus also his Buddhi –practically and incredibly embodied in the canvas which is entitled today as Lady with the Ermine– wanted to complete his extraordinary pictorial work by now providing us with another canvas in which we can appreciate nothing less and nothing more than his own Intimate Christ.

I must emphasize to you that to make these transcendental pictorial works it is necessary to be a legitimate clairvoyant or Turiya, because only in this way could we be able to see perfectly the physiognomy of the various sacred parts of our own BEING.

To delve into this work of royal art we must begin by describing the face of the Adorable One and in it we appreciate, in his eyes, an unattainable depth. That is why Master Leonardo did not want to show his inner Lord with a clear, open, evident look, but chose to surround the very gaze of the Salvador Salvandus of the Gnostics with due mystery.

We appreciate, if we look very closely, that the neck and chest of the inner redeemer are like a mixture of something masculine and feminine at the same time. What is the reason for this characteristic? Simply because, the Inner Christ being one of the three primordial forces that sustain creation and our own Sephirotic Tree, it is easy to understand that this part of the divine triad has, as we know, parts of the other two that integrate its own structure.  Thus, therefore, the Mother has something of the Son, the Son of the Mother and the Father or Kether has attributes of the other two.

The inner Savior wears a blue garment, representative of the sky or superior worlds, and, curiously, the chest is crossed by two kinds of brown straps that make up an X. We must remember that in phonetic Kabbala and linguistic Kabbala, X is equivalent in hermeticism to K. Hence Gnosis, on many occasions, refers to the Second Logos of the sephirotic triad as XRESTOS or KRESTOS.

The Venerable Adept Fulcanelli, speaking about this mystery, brings us something interesting, let’s see:

Until the 12th century, no other mark was used to authenticate old charters; from the 15th century on, the cross became the signature of illiterates. In Rome, auspicious days were signed with a white cross and unfavorable ones with a black cross. It is the complete number of the Work, because unity, the two natures ─namely Sulfur and Mercury in Alchemy─ the three principles, and the four elements give the double quintessence, the two Vs joined in the Roman cipher X for the number ten. The number is the foundation of the Pythagorean Cabala, or of the universal language, whose curious paradigm can be seen on the last page of a little alchemy book ─La Clavicule de la Science Hermetique, écrit par un habitant du Nord dans ses heures de loisir, 1732, Amsterdam, Pierre Mortier, 1751─. Bohemians used the cross or the X as a sign of recognition. Guided by this graphic traced on a tree or on some wall, they still camp exactly on the spot occupied by their predecessors near the sacred symbol which they call Patria.  […]

The cross of the Gypsies or Romanies therefore indicates the place of refuge assigned to a tribe. Furthermore, almost all the meanings revealed by the sign X have a transcendent or mysterious value. In algebra, X is the unknown quantity; it is also the problem to be solved, the solution to be discovered; it is the Pythagorean sign of multiplication and the element to cast out the nines in arithmetic.  […]

All bodies of nature, all beings, either in their structure or in their appearance, abide by this fundamental law of radiation, all are subjected to this measure. The canon of the Gnostics applies this measure to the human body; and Jesus Christ, spirit incarnate, St Andrew and St Peter personify its glorious and painful image. Have we not noticed that the aerial organs of vegetables –be they lofty trees or tiny herbs– show along with their roots the characteristic divergence of the branches of the X? In what manner do flowers bloom? Section vegetable leaves, leafstalks, nervures, etc., examine the cross-sections under a microscope and you will observe, with your own eyes, the most brilliant, the most marvelous confirmation of this divine will. […]

Its whiskers gave the cat its name [Xa, the sign of light]; we no longer doubt that they hide a meaning of high degree of knowledge and that this gracious feline owes the honor of being raised to the rank of Egyptian deities to this secret reason.  […]

[The X] It is a translation of celestial fire or terrestrial fire, of potential or virtual fire that composes or disintegrates, engenders or kills, vivifies or disrupts. Son of the Sun that generates it, servant of man who liberates and feeds it, the divine fire, downfallen, imprisoned in heavy matter, in order to determine its evolution and orient its redemption, is Jesus on his cross, image of the igneous, luminous and spiritual radiation incarnate in all things. It is the Agnus sacrificed since the beginning of the world, and it is also Agni, Vedic god of fire, but if the lamb of God carries the cross on its banderole just as Jesus bears it on his shoulder, if he supports it with its foot, it is because he has the sign of it inlaid in his very foot: image outside, reality inside. Whoever receives in this way the celestial spirit of the sacred fire, who bears it within himself and is marked by its sign, has nothing to fear from elemental fire. These elect, disciples of Elijah and children of Helios, modern crusaders having for guide the star of their elders, go for the same conquest with the same cry of God wills it!“

─Excerpts from the work The Dwellings of the Philosophers by the V.M. Fulcanelli─.

On the other hand, esteemed reader, it is good to know that the X accompanied by the letter S ─symbol of sulfur─ at one end and at the other by the letters KOH ─indicating potassium─ constitute the hieroglyphic of the elements that make up the work.

All of us who have studied contemporary Gnosticism know clearly that the Blessed Stone or Philosopher’s Stone is conquered by means of the intensive crossing of sulfurized Mercury with purified Mercury. Such a Stone is, for the one who makes the hermetic journey, the Intimate Christ himself. That is why only the inner Christ can become the Salvatore Mundi ─Savior of the World─.

In his right hand this majestic Christ makes the sign of the three primary forces of creation –Father, Son and the Holy Spirit– using the thumb, index and middle fingers. In his left hand, the Redeemer carries a kind of sphere alluding to the hermetic sphere that we see drawn in many alchemist engravings of the Middle Ages. This sphere that is shown here also manifests a kind of gelatin and at its base what looks like gold dust can easily be seen, an unequivocal sign that these are the two primordial natures –Sulfur and Mercury– already converted into a single one that we always call mercurial sulfur or sulfurized mercury for having become the fire that destroys the pluralized “I” and builder of the atomic vehicles necessary to have objectivity in the superior worlds of Consciousness.

Noteworthy is the precious gem or ruby of the brothers of Heliopolis, unequivocal symbol of the Stone of splendors or the carved Stone, at the base of the neck of the Nazarene. We must consider, dear reader, that this ruby that Leonardo has painted as a pendant that falls on the chest of the Christ, allegorizes the famous red carbuncle of which the medieval alchemists spoke, which is equivalent to the Philosopher’s Stone itself.

So, esteemed companions of the path, you now know why Leonardo da Vinci gave himself to the task of making this splendid work of royal art. He did it to invite us to look for the one who will tear us from the Wheel of Samsara to introduce us to his kingdom that is none other than eternity.

With good reason, when he showed himself through the V.M. Aberamentho, he always repeated in his preaching: “I am the way, the truth and the life” …

I am pleased to leave you now a few sentences for your reflection:

“The race of life is brief, that of glory is eternal.”
Cicero

“Dying is the common destiny of men, dying in glory is the privilege of the virtuous man.”
Isocrates

“Of all the calvaries of history there is no greater calvary than that of Glory.”
Campoamor

“He ne’er is crowned with immortality who fears to follow where airy voices lead.”
Keats

“Glory, like light, is more useful to those who do not suffer its effects than to those who are enveloped by it.”
Plutarch