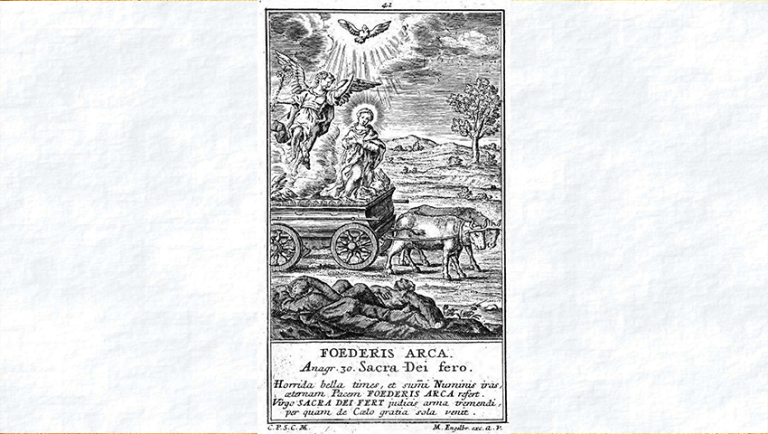 I send you, on this occasion, two engravings that complement each other and that we can encompass with the following title:

THE SALVATION OF OUR SOUL THROUGH THE DIVINE MOTHER

First of all, dear reader, we must remember that in ancient Christianity Stella Maris – Devi-Kundalini – was worshipped by reciting what came to be called Christian litanies. Such litanies referred to the various attributes of the Divine Lady, attributes by means of which She could rescue us from the Avernus. Thus, then, there was talk of “morning mirror”, “health of the sick”, “ivory tower”, “refuge of sinners”, etc., etc., etc.

So, every time our blessed Mother Kundalini wanted or wants to save us from our own perdition, caused by the innumerable psychological aggregates that constitute our Ego, She sets her attributes in motion to succeed in her task.

Therefore, we are going to refer first to one of the engravings that is cataloged as…

This illustration shows us a carriage pulled by two oxen, on top of which we see the Divine Mother accompanied by the Angel Gabriel. This Angel carries in one of his hands the flowering rod, as a reminder of the spine of Joseph ─Mary’s husband─. Needless to say, in everyone who has managed to tread on the Secret Path his spine is certainly blossoming, that is, full of the virtues that accompany the transmutation of our sexual secretions, speaking in alchemist language.

Above Her, in heaven, we see the resplendent allegorical dove of the Holy Spirit, for we cannot forget that the divine Eternal Feminine is always accompanied by her husband. That is the binomial that makes up, in the Hindustani religion, Shiva-Shakti.

It is the Holy Spirit who fecundates the womb of Kundalini-Shakti, and therefore they work together within us.

This engraving, therefore, is, in short, the symbolism of the Ark of the Pacts, because we long to be rescued by the divine pact that God Mother wants to set in motion with her son: the intimate Chrestos.

This engraving, patient reader, is accompanied by some Latin phrases, which I add below for you:

Anagr. 30: ‘I bring the sacred things of God’ –namely: She, Stella Maris, brings the force of the BEING–.

‘The ARK OF THE COVENANT restores eternal peace’ –namely: Without the Ark of the Covenant, without the Arcanum A.Z.F., without the help of our blessed flaming force, it would be impossible to achieve the Peace of the Kingdom of the Being–.

‘The Virgin brings the sacred weapons of God the terrible judge and by means of Her He brings the only grace from heaven.‘

This second engraving shows us first of all a tower occupied at its upper part by little angels –parts of our own inner Being–. One of those little angels carries in his hand the cross of the redeemer of humanity.

On one side of that tower we can see Christ himself carrying in his hand a cluster of fire –for, gnostically speaking, the Christ is the embodiment of the celestial fire–. Next to the Christ we see a man falling downward, allegorizing the lost souls. We can also see at the background of this engraving a mountain that also looks like a tower. In this case it is the Tower of Babel, which symbolizes the confusion of languages and creeds in which our sleeping humanity is plunged. Notice, on the other hand, a huge elephant –symbol of the Logos in gnoseology– crushing a monstrous creature. Such a monster has been called in occultism and in Alchemy with the qualifier of basilisk, synthesis of all the infernal aggregates that constitute the animal Ego.

The Latin sentence is the following:

‘Anagr. 28. Do not be troubled [we could say: do not let yourself be troubled], run.

Examine whether you are unaware of what the IVORY TOWER can [do], in which for your part the Dragon of tartarus is defeated with art [translating more freely: in which you overcome the infernal Dragon with the art].

Here do not be troubled [do not let yourself be troubled], sinner, suffering for the heart, run there to the embraces of the Virgin, be mysterious [hidden/prudent]’.

Allow me now, dear friends, to give you a few sentences for your reflection:

“Time brings forth new pitfalls whose existence we never thought possible; victory must not be considered certain until the combat has come to an end.”
Solon

“Life is a theater: you enter, you watch and you leave.”
Democrates

“Man is the dream of a shadow.”
Pindar

“To begin to live, to grow, is a painful process: our life begins as a detachment and culminates as an uprooting.”
Octavio Paz

The supreme importance of practicing meditation